Dada, a transnational movement of artists, was founded in Zurich in 1916. It disappeared in 1924, after a sham trial against Maurice Barrès in 1921. Far from pacifism, Dada declared war against war. Today, its innovations remain as examples of a sublimated violence.

A Transnational Network of Artists↑

The transnational movement of artists known as Dada was founded in Zurich in 1916, during the Battles of Somme. Afterwards, Dada spread to Germany, France, the United States, Latin America, and Japan. The principal cities where Dada had a significant impact were: Zurich, Paris, Berlin, Hanover, Cologne, Barcelona, New York, and Tokyo.

The Romanian writer Tristan Tzara (1896–1963) originated the term Dada, supposedly by flipping through a French-German dictionary and happening upon it. The name "Dada" has no meaning. Dada became a part of poetry, literature, paintings, sculpture, design, theater, and film. The movement comprised both writers and painters, such as Louis Aragon (1897–1982), Marcel Duchamp (1887–1968), Max Ernst (1891–1976), Francis Picabia (1879–1953), and Kurt Schwitters (1887–1948). Even with the diverse network of people involved, it was often the same person doing the writing, painting, and carving. From cuttings, collages, and assemblies, to deconstruction of languages, Dada invented new ways and forms of artistic creation. One common trope was organizing waste materials and patching together complete works from bits and pieces.

A Collective Artistic Cry against War and Nationalism↑

Dada intended to make war against war. As such, it was based on the very idea of destruction and the implementation of a sublimation of violence. This mission was also the reason Dada took such a radical and heterodox approach, unleashing against war the global anger generated by its horrors. Vigorously condemning warmongers, the movement spoke out persistently against senior political-military officials who called upon soldiers to kill and die for their homeland. The movement intended to take a stand against indoctrination on the military front as well as in the rear. Dada believed that the Great War was an unprecedented process of converting Europeans into animals. In a derisive style, Dada led a real artistic insurgency against dehumanization, the trivialization of evil, and the absurdity of established values. In terms of art, literature, morals, and social conventions, Dada's members were always looking to create controversy. Most of the time, their works, full of self-destructive furor, were ephemeral on purpose; this posture must be understood as an allegory and tribute to the millions of men who were obliged to kill each other in war.

The subversive offensive of Dada members was based on German and French anti-patriotism. The Dada movement was often exposed to the hate of some veterans’ leagues and was sometimes submitted to their direct violence. At a time when nationalism was particularly threatening, questioning the very idea of a "nation" was actively discouraged. Far from pacifism and closer to nihilism, Dada imposed itself on the international level, refusing every means of expression against war.

Maurice Barrès (1862-1923), the French nationalist writer and politician, violently opposed to Dada, was subjected to a sham trial in 1921. At that time, in a fictitious and spectacular trial, the Dada movement accused him for having committed an "offense against intellectual security."[1] However, this cry of hate and disregard against legal institutions was also their last public event of importance.

Dada's artistic network rapidly lost its impact in 1923 and 1924 when the surrealist movement took over thanks to its leader, André Breton (1896–1966), and his Surrealist Manifesto published in 1924. Nevertheless, before transitioning into this new structure and disappearing in 1924, Dada designed new artistic forms that continue to inspire contemporary art. Today, Dada's inventions belong to history as a successful transposed violence in the art field. 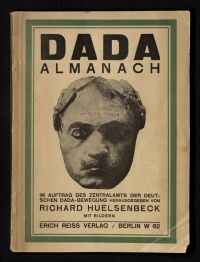