Circassian nationalism refers to national movements among Adyghe people, a North Caucasian ethnic group. The term is also used to include other North Caucasian peoples who share historical commonalities with the Adyghes. By 1914, the overwhelming majority of Circassians were living in the Ottoman Empire as a diaspora population.

Who Are the Circassians? A Terminological Clarification↑

In its narrow sense, Circassian is an exonym for Adyghe people, an ethnic group originating from the North Caucasus. Traditionally, it is accepted that the Adyghe nation is comprised of twelve tribes, each of which is represented with a star on the Adyghe flag.[1] However, Circassian is also an umbrella term because throughout history Russians as well as Ottomans lumped several North Caucasian peoples into one category as Circassians. Split into numerous linguistic and tribal groups, Sunni Islam, rather than nationalism, had been a unifying factor in the North Caucasus when the region became a target of Russian expansionist policies in the 19th century. Therefore, until the 20th century, it is practically impossible to separate national movements among different North Caucasian peoples.

Russian expansion into the North Caucasus started in the late 18th century. The Caucasian wars ended with a decisive Russian victory in 1864, which led to the genocidal exile of nearly a million North Caucasian Muslims to the Ottoman Empire.[2] Most Adyghe, or Circassian, tribes were completely massacred or deported after this date, and the few which remained in the Russian Empire were resettled in the Kuban oblast.[3] Even though Adyghes were the main target of expulsion and extermination in 1864, other North Caucasian Muslims shared a similar fate. Orthodox Russians, Cossacks, and other groups who were deemed loyal by the Tsarist government were resettled in historical Circassian lands.

Despite the militaristic nature of the Russian Empire’s relationship to its Caucasian subjects, Russian administrators also devised methods to coopt local elites into the imperial administration until 1864 by opening schools or forming Circassian regiments. This policy allowed a few Circassian elites to rise in the imperial system, either converting to Orthodoxy or maintaining their Islamic faith. Although their numbers were few, some of these people, such as Shora Bek Mirza Nogma (1794-1844) and Khan Giray (1808-1842) contributed to the development of a literary Adyghe language and wrote histories of their nation.[4]

Following their deportation in 1864, Caucasian refugees successfully integrated into Ottoman society. In the diaspora, tribal identities weakened and a common North Caucasian-Circassian-Muslim-Ottoman identity replaced tribal affiliations. There were many Circassians in the Ottoman bureaucracy both before and after the 1908 Constitutional Revolution. Especially among the ranks of the Committee of Union and Progress (CUP), there were many Circassians in key positions, such as Eşref Bey Kuşçubaşı (1873-1964) and Mehmed Reşid Şahingiray (1873-1919). Circassians cherished their Caucasian heritage, while becoming an integral part of Ottoman – and later Turkish – politics.

After the proclamation of the Ottoman constitution in 1908, the Circassian national awakening found new media of expression. In this period, some proto-nationalist Circassian outlets appeared, such as the Çerkes İttihat ve Teavün Cemiyeti (Circassian Union and Mutual Aid Society), founded in 1908.[5] The society published a bilingual Turkish-Adyghe journal, Ğuaze (Guide), and opened schools for Circassian children. They also established contact with their brethren in the North Caucasus and sent them educational materials. After the outbreak of the First World War, Circassian organizations became more politically oriented, as is illustrated by the activities of the Şimalî Kafkas Cemiyeti (North Caucasian Society) and the Kafkas İstiklâl Komitesi (Committee for the Liberation of Caucasus), both of which were supported by the CUP.

Circassian women were also active participants in public debate. In 1919, the Çerkes Kadınları Teavün Cemiyeti (Circassian Women’s Mutual Aid Society) was founded. The society published a bilingual Turkish-Adyghe newspaper, Diyane (Our Mother). They also opened a mixed-gender school in 1920, the first of its kind for Muslim schoolchildren in the Ottoman Empire. The school offered education in the Latin alphabet, years before its adoption by the Turkish Republic.

Circassians during the First World War↑

For North Caucasians, the most dramatic events of the First World War unfolded with the February and Bolshevik revolutions. In March 1917, shortly after the overthrow of the Romanov dynasty, North Caucasian leaders proclaimed the Terek-Dagestan provisional government. In the same month, a group of Circassian activists, who were part of the Çerkes İttihat ve Teavün Cemiyeti, established the Adyghe Xase (Adyghe Society) in Terek.[6]

After 1918, the North Caucasus witnessed fighting between various Caucasian groups, the Red Army, and the anti-Bolshevik White forces led by Anton Denikin (1872-1947). In May 1918, North Caucasian leaders proclaimed the North Caucasus Mountain Republic. The Ottomans were the first to recognize this state.[7] In the summer of 1918, Ottoman forces under the leadership of İsmail Hakkı Pasha (1890-1954) and Yusuf İzzet Pasha (1876-1922), both of whom were of Adyghe origin, entered Dagestan to support their North Caucasian allies against the Bolsheviks. However, even before the Ottomans signed the Mudros Armistice in October 1918, the North Caucasus was divided by ethnic, social, and political considerations. In November 1918, Ottoman forces retreated from the Caucasus, but some Ottoman officers of Caucasian origin remained and continued to fight against the Bolsheviks.[8] By 1920, the Bolsheviks were firmly in control of the North Caucasus, despite sporadic anti-Bolshevik revolts in the early 1920s.

Circassians and the Turkish National Movement↑

In 1918-1920 there were a number of revolts against the Ankara government in northwestern Turkey, a region with a substantial Circassian population, the most notable of which was led by Ahmet Anzavur (1885-1921). However, these revolts were instigated by economic difficulties and attempts at centralization by the Ankara government, rather than nationalism, and their participants were ethnically diverse. Moreover, it was another Circassian, Çerkes Ethem (1886-1948), who ultimately played a big role in their suppression.

After 1920 the Bolsheviks and recently established Ankara government forged an alliance, which meant that Ankara renounced any support for North Caucasian independence. Despite this change of policy, there were still many Circassians in the cadres of the Turkish national movement in the 1920s. In addition to Circassians affiliated with Mustafa Kemal (1881-1938), several Circassian paramilitaries played an important role in the Greco-Turkish War of 1919-1922. The most famous was Çerkes Ethem. Despite initial coalition, Ethem did not want to be subordinate to the centralized command of the Turkish army and drifted away from the Ankara government in late 1920. In January 1921, Ethem defected to Greek forces and left Turkey with the retreating Greek army in 1922.

The Circassian school established before the war was closed in 1923 as the Lausanne Peace Treaty (1922), the founding agreement of the Turkish Republic, recognized only non-Muslims as minorities and developed a centrist approach to education.

Circassians in the Early Soviet Union↑

Early Soviet nationality policy encouraged each ethno-linguistic group to develop national cultures within the limits permitted by Marxist-Leninist ideology. Adyghe history was also rewritten in Soviet terms.[9] Soviet policy rested on the assumption that “Circassians” were made up of three separate ethnic groups: the Cherkes, Adyghe, and Kabardinian. Consequently, Circassians found themselves split into Kabardino-Balkar, Adyghe, and Karachai-Cherkes autonomous oblasts within the Russian Soviet Federative Socialist Republic after its declaration in 1922. Kabardino-Balkaria acquired autonomous republic status in 1936. 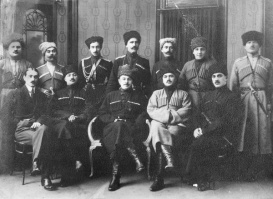 Men of the Mountainous Republic of the Northern Caucasus