Though 100 years have elapsed since World War I, it has not enjoyed the due attention of Bulgarian society and has been given very poor coverage in the Bulgarian media. This article will discuss the official and unofficial celebrations of the centenary in Bulgaria between 2015 and 2018.

Introduction: Legacy from the Communist Period↑

Why is an event of such critical importance for Bulgaria’s modern history so heavily neglected? First, this can be seen as a continuation of the inertia of the official communist assessment of the First World War in compliance with Vladimir Lenin’s (1870-1924) view that it had the character of a “bourgeois, imperialist and dynastic war.”[1] Bulgaria’s participation was believed to be due to “the reactionary role of the bourgeois clique, the militarism of the high-ranking officers and the Bulgarian king Ferdinand.”[2] For half a century, studies of the First World War focused on events relating to actual or imagined protest movements of the working class and the communist party – revolutionary acts in the trenches, twinning of Bulgarian and Russian soldiers, and “hunger riots” in the rear.

The restoration of a democratic system of government in 1989 resulted in the replacement of the one-sided assessment of the war. Similar to other countries in Europe, a number of events were organized in connection with the centenary of the First World War. From 2015 (and not from 2014, like most other countries) to the present, the Council of Ministers has adopted a decree to allocate annual funds to mark the anniversary. The amount allocated in 2015 was BGN 185,095[3], BGN 380,000 in 2016[4], and BGN 360,000 in 2017 and 2018.[5] Most of the funds were allocated to local governments in Bulgaria for the purpose of rehabilitating, restoring or, more rarely, building new monuments or memorial plates. In 2015, the funds were allocated to twenty-nine villages and towns, to sixty-one in 2016, and eighty-two in 2017. The monuments mostly consist of steles with the names of the fallen soldiers. Financial support is also extended for the publication of studies of different kinds of troops or military units and exhibitions. Of particular public interest is the “Little Man in the Big War” exhibition organized by the National Museum of Military History, which displays objects from the everyday life of the participants in the war, as well as the exhibition of “trench art.” Several scientific events were also organized, among them an international conference titled “The First World War and Bulgaria,” attended by more than 100 scholars, with twenty-eight hailing from nine foreign states. The conference, organized by the Bulgarian Military Academy, was mainly focused was on military issues and the presentations were published in a special book.[6] Another similar conference was held in December 2017 in Bulgaria’s wartime capital Kyustendil.[7]

In June 2018, the French Institute in Sofia in partnership with the Mission du Centenaire in France organized a thematic day, “The Great War in the Balkans - cross-views, comparative perspectives,” with the participation of scholars from France and the Balkans. Unfortunately, no more than thirty people attended the event despite its publicity.

The Bulgarian historiography has not used the centenary to open new questions. The newly edited and re-edited books are mostly concentrated on the history of different regiments or battles. Authors whose research goes outside the military field, and who talk about what can be described as "taboo subjects" like war crimes or deserters are strongly criticized by the general public, especially on social media. Their studies stay encapsulated in their narrow academic field. The political parties, even the more nationalistically oriented ones, remain silent and make no visible appearances in reference to the war. The centenary of the Neuilly Treaty in 2019 may be different and these kinds of parties may organize protest parades under the traditional slogan "Neuilly is not forgotten."

The centenary drew the public’s attention to the fact that even now there is no big monument in commemoration of the First World War. One monument was built in 1934 in the center of Sofia, consisting of a statue of a lion and three memorial walls, on which the names of more than 3,000 soldiers and officers from first and sixth infantry regiments of the Sofia Division (“The Iron Division”) were inscribed. In 1981, in connection with the celebration of the 1,300th anniversary of the Bulgarian state, the walls were demolished and replaced with a thirty-five-meter high monument made of concrete and brass, called “1,300 years Bulgaria.” The new sculpture did not appeal to the residents of Sofia, who thought that it was ugly and pretentious. After the Berlin wall was demolished, the idea of restoring the old monument enjoyed the increasing support of city residents. In November 2014, the Sofia City Council voted unanimously to demolish the existing monument. It was dismantled and replaced with the lion from the monument from 1934. The walls have yet to be restored.

An initiative worth paying attention to is the 2018 opening of a chapel-mausoleum in Sofia in memory of soldiers killed in the war. The initiative was launched by the municipality of Sofia and some private foundations. The chapel will be financed through donations, located in the park around the Military Academy, and open to the public.

The 1916-1917 war against Romania was a separate episode in Bulgaria’s participation in the First World War. Some of the battles were waged on the present territory of the country, which offers the only opportunity for organizing commemoration on specific battlefields. All other sites are located outside of Bulgaria, and its Romanian, Serbian, and Macedonian neighbors are not prepared, for the time being, to accept similar commemoration with enthusiasm. Countries in the Balkan peninsula are not interested in jointly memorializing events with former enemies that symbolize their division in the past. The commemoration of the centenary of the capture of the Tutrakan fortress in the beginning of September 1916 was an exception to this rule. The town became a stage for a theatrical reconstruction of event, the “players” both Bulgarian and Rumanian nationals. Such a reconstruction was also performed in the city of Dobrich, in which 150 “players” from Bulgaria, Israel, Russia, Ukraine, and Lithuania took part.

At the same time, the Dobrich local government decided to build a monument on the city’s main street to General Ivan Kolev (1863-1917), one of the most notorious military commanders during the campaign against Romania, on the occasion of the centenary of his victory. A six-meter high statue was built, but it was not approved by the public and many people stated that it was kitschy: when people approached it, a sensor mounted in the base of the statue played the then Bulgarian hymn “Shumi Maritsa” (“Maritsa Rushes”).

Finally, national television prepared and broadcast “The Frontier,” a six-part adaptation of Yordan Yovkov’s (1880-1937) military stories. The series did not attract any special interest.

Problems between Bulgaria and FYROM in Celebrating the Anniversary↑

An incident relating to the centenary which was given broad media coverage was the demolition of the memorial plate placed on Kaimakchalan peak on the territory of the Former Yugoslav Republic of Macedonia (FYROM) to commemorate the battle between Bulgarian and Serbian troops in September 1916. On 20 September 2016, several senior Bulgarian officers, accompanied by Greek officers, installed a plaque in commemoration of the Bulgarian soldiers without a permit from Macedonia. The reason why they did not ask for such a permit, according to their explanation, was the fact that before that moment all similar requests relating to monuments to Bulgarian soldiers had been left without response from the Macedonian authorities. Two days later, on 22 September – Bulgaria’s Independence Day – Macedonian journalist Milenko Nedelkovski published photos of him smashing the plaque with a hammer.

The initial reaction to this act of vandalism was contradictory on the two sides of the border. The prime minister of Bulgaria threatened FYROM that Bulgaria would not support its accession to the EU. The reply of the Ministry of Foreign Affairs in Skopje was that the plate had been placed illegally. The relations between the two neighboring states were spoiled by this event until the end of 2016. At a meeting between the two presidents in November 2016, the Bulgarian President Rossen Plevneliev stated that he expected “a final decision concerning the memorial plate in Kaimakchalan to be made within a short time.”[8] This event was yet another episode in the extended confrontation between the two countries over historical memory.[9]

The foregoing are the official initiatives in connection with the centenary so far. Civil organizations and associations have marked the anniversary of the war by visiting and laying wreaths or repairing monuments across the country or in neighboring countries – for example in Doiran and Kaimakchalan – but such acts are rarely covered in the media. There is only one webpage focused on the Great War, namely a social media site: the group “Bulgaria and WW1” with over 4,000 followers.[10]

The lack of public interest in the centenary of the First World War does not differ much from the almost missing commemoration of the two Balkan wars five years prior. Since Bulgaria was on the losing side, attention has been focused only on the victories of the Bulgarian army. The centenary of the First World War has attracted the interest of the media mostly in the case of scandals, where confrontation has been in the foreground. Commemorations at a local level have not enjoyed any national coverage. As a whole, both in 2015 and 2018 the preoccupations of the general public stay far from historical events from 100 years ago. Greater activity and public engagement can be expected in relation to the 100th anniversary of the signing of the Neuilly Treaty, which continues to be perceived as a great injustice. 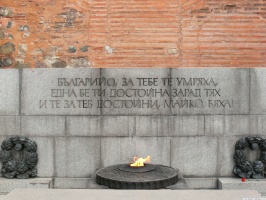 Monument to the Unknown Soldier in Sofia, Bulgaria 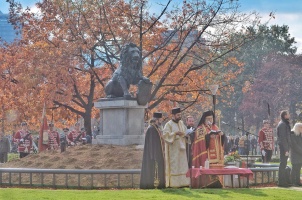 Monument to the Iron Division, Bulgaria