Macedonia was one of the main battlefields on the Balkan Front during World War I. The article describes the pre-war activities of the Internal Macedonian Revolutionary Organization (IMRO), its role in the Bulgarian occupation regime, and the fall of the Bulgarian defense after the Battle of Dobro Pole.

Eve of Bulgarian Entry in the Great War↑

Since the Berlin revision of the “San Stefano Treaty” Bulgarian nationalists aspired to regain Macedonia. The Internal Macedonian Revolutionary Organization (IMRO, or Вьтрeшна македонска революциона организация) was founded in 1893 with the aim of merging Macedonia with Bulgaria through a step of autonomy. The self-styled IMRO revolutionaries – activists using terror as the main tool of political propaganda ­– threw the Macedonian population into a serious state of violence for two decades. The region became the focus of rivalry among Balkan states and European diplomacy.

As a result of the Balkan Wars (1912-1913), however, Macedonia was divided among Serbia (Vardar valley), Greece (Aegean coast), and Bulgaria (Pirin region). The Serbian part turned out to be the most unstable, as the overwhelming majority of the population – Slav Macedonians, Albanians and Turks – were all resentful of Serbian rule. The military government introduced harsh measures to quell unrest, but to little avail. One of the reasons lay in the IMRO’s pursuit of a unified and autonomous Macedonia. During late summer 1913, IMRO instigated local uprisings in Tikvesh, Ohrid and Debar. The events had a joint Muslim-Bulgarian characteristic. Impressed by the effectiveness, IMRO decided to work with Turks and Albanians in the hopes of revising the Bucharest Treaty that had endorsed the division of Macedonia. When the First World War broke out in July 1914, the IMRO increased sabotage attacks against Serbian rule, culminating in the Valandovo Affair on 2 April 1915, a large-scale guerilla attack against Serbian positions orchestrated by the IMRO and Turkish bands.

The IMRO’s efforts materialized when Bulgaria entered the war on 25 August 1915. The Bulgarian 1st Army advanced into the Timok region, chasing the Serbs toward Kosovo, while the 2nd Army conquered the Vardar valley, effectively cutting off the Serbs from their allies. The German hesitation, however, to let Bulgarians chase the Entente force in Greek territory gave the Franco-British reinforcement at Salonica a second chance. With the Macedonian front bogged down, Bulgarians had to endure exhausting trench war for three years to come.

The secret agreement with the Central Powers foresaw Bulgarian occupation of the Vardar valley. The Macedonian inspectorate was set up in Skopje on 8 December 1915 to oversee the occupation regime. The inspectorate was composed of nine districts (Skopje, Kumanovo, Tetovo, Shtip, Tikvesh, Bitola, Ohrid, Prizren, and Prishtina). Districts were divided into several counties. The interior ministry in Sofia appointed all unit heads.

The IMRO actively took part in the war against the Serbs either as the 11th Macedonian infantry division (a total of 33,754 men), or guerilla bands engaging in reconnaissance. As a reward, many IMRO activists were appointed county chiefs and administrators. The ex-activist administrators turned out to be totally incompetent in controlling civil affairs. They were cruel, brutal, and often usurped their authorities. Requisition for the front caused constant food shortage, and even famine in some districts. To cope with the difficulty, a rationing system was introduced, but it resulted in rampant speculation and contraband, due mainly to the corruption of local authorities. The popular discontent arising from the misrule was further intensified by the measures of "Bulgarianization." The occupying regime introduced regulations and administrative routines modeled on the Bulgarian mainland. Imposition of literary Bulgarian, especially in education, incurred much resentment among Albanians and Turks. The tacit alliance between the IMRO and Muslims activists was seriously undermined, leading to sporadic popular unrest and further depleting the Bulgarian regime’s resources.

Battle of Dobro Pole and Aftermath↑

Along with the retreating Bulgarian army, former IMRO fighters and activists evacuated the territory. Thousands of refugees followed suit, reducing drastically the IMRO’s resilience. Although they never gave up their seditious plans against the Yugoslav regime, subsequent IMRO actions would never go beyond sporadic guerilla raids and the assassination of high officials. 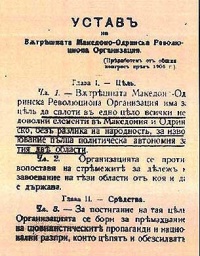 Excerpt from the Statute of the Internal Macedonian-Adrianople Revolutionary Organization, 1906