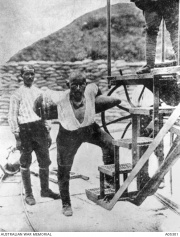 Seyit Onbaşı (Corporal Seyit) is an iconic figure and symbol of the Turkish naval victory at the Dardanelles on 18 March 1915. He allegedly carried a 275 kg heavy shell to the gun.

Corporal Seyit, who later took the surname Çabuk (1889-1939) was born in a small town in western Anatolia, Havran's Çamlık village. He was recruited into the army in 1909. Because of the Ottoman Empire's fragile social situation, he remained, like many young Ottoman men, in the army for a long time. After the Balkan Wars, he served at one of the most important forts on the Dardanelles, Rumeli Mecidiye (Fort No. 13 in British Dardanelles maps). After the First World War, he lived a humble life in his village as a portage and woodchopper. He died in December 1939 of pneumonia.

Soon after the Ottoman Empire joined the First World War, Allied flotilla gathered around the Dardanelles, as the strait would be their main target. The Allied Navy's Dardanelles operation began on 19 February 1915. According to Admiral Sackville Carden's (1857-1930) Zone Plans, they initially tried to silence the outer forts. Naval operations went well for the Allies and the Orhaniye and Ertuğrul forts, the defences at the entrance of the strait, were silenced. Finally, a grand scale attack was decided, aiming to neutralize all forts on both sides of the strait.

Seyit's fort, Rumeli Mecidiye, was located on a hill close to Kilidbahir village across from Çanakkale town. The Allied navy's eighteen battleships led by the superdreadnought, the HMS Queen Elizabeth, entered the Dardanelles on the morning of 18 March 1915 and the first salvos were opened at 11:00 am. As fierce mutual fires continued between Turkish batteries and the Allied flotillas, around 2:00 pm, French battleships approached within 8,000 meters of the narrow strait, when the Rumeli Mecidiye fort opened fire. The fort had been hit hard by several direct heavy shells that killed several men and wounded twenty-four. Seyit served on the third gun. It was hit by shellfire at the height of battle, damaging the autoloading gear and rendering it useless. Seyit lifted one of the shells onto his back and carried it to the gun. An official paper from the military archive[1] recorded the performance of the fifty-six soldiers at the Rumeli Mecidiye artillery on 18 March and praised them for their bravery. Thirteen of them, including Corporal Seyit, managed to continue the artillery fire without interruption. The document explained that Seyit enabled the battery gun’s incessant fire, carrying shells whose weights ranged from 190 to 215 kg. But, Seyit was not only soldier to display this courage act. Moreover, it stated that a private soldier, Osman oğlu Ali from Konya, had achieved exactly the same feat (carrying 190 kg shells).

Seyit's heroic act on 18 March 1915 made him one of the legendary figures in the commemorations of the Dardanelles victory in Turkey. His sculpture stands in front of Rumeli Mecidiye fort overlooking the strait. Corporal Seyit's heroic story has been used as a symbol of national identity and as part of commemorations.

A study recently revealed that the French battleship Bouvet was hit by Rumeli Mecidiye guns contrary to the official British account, which attributed Allied defeat to floating mines and denied to credit to the Ottoman artillery for their success.[2] On the other hand, popular histories in Turkey assert that Seyit's shell hit HMS Ocean, although this has never been confirmed. Even in the national civil servant’s exam, one of the questions was “What is the name of the battleship which Corporal Seyit hit on 18 March 1915, the day of naval victory?” Regardless of the validity of these arguments, it is clear that neither such a sophisticated gun's shooting range could be calculated nor could it have been fired by an ordinary soldier such as Seyit.

Seyit's Fort Commander Major Hilmi Bey, later Hilmi Sanlıtop (1884-1946), mentioned in his memoires how he motivated his battery's soldiers and praised his soldier’s great efforts including Seyit’s, who carried 190-215 kg shells. After 18 March, Seyit's photograph with a heavy shell was planned to be taken for a war magazine. However, this time he could not lift it. He posed with wooden imitation of the shell. A famous photo depicting Corporal Seyit was covered by Harb Mecmuası (War Journal) on its December 1915 (No. 2) issue. It rendered him immortal and he became the symbol of the Turkish naval victory at the Dardanelles on 18 March 1915.

Harb Mecmuası (War Journal), a magazine that covered Seyit's photo in December 1915 issue and backed by the Intelligence Office under the General Staff, was the most popular Ottoman magazine during the First World War. It consisted of articles that evaluated several fronts, patriotic poems and especially ordinary soldiers' heroic stories with impressive amounts of photos. It was widely disseminated among both civilians and soldiers and aimed at convincing the public of the idea that the Ottoman Empire had sufficient power to maintain the war. Corporal Seyit's photo must have been used as a cover for the same aim. Interestingly, its footnote reads “A strong, gallant soldier in Çanakkale fortification who carrying a shell on his back, weighing 215 kıyye. Seyyid, son of Mehmet. It is an example of our army's love of war.”[3] It was mistakenly written here that a weighing unit 215 kıyye was equal to 275 kg. In fact, 1 kıyye was an old measuring unit in the Ottoman Empire and 1 Okka equals 1.28 kg. The claim that he had lifted 275 kg shell is based on this miscalculation. Moreover, there was no gun in Rumeli Mecidiye Fort that could fire a 275 kg shell. The fort consisted of six Krupp shore guns (four of them 240/35, with a mean range between 9,000-11,000 meters, and two of them 280/22 with a mean range between 7,000-8,000 meters), whereas their shells weighed approximately between 190 and 215 kg.

Corporal Seyit is undoubtedly an iconic figure in Turkey’s present popular Dardanelles narrative. Even the new Turkish Republic used his deeds as an example of patriotism. Like all propaganda the truth mixed mythology and turned it into the new reality. 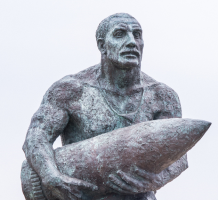