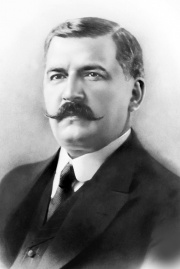 Venceslau Brás was president of Brazil between 1914 and 1918. On 26 October 1917, he signed the Brazilian declaration of war against Germany.

Venceslau Brás (1868-1966) was born into a traditional oligarchic family in the state of Minas Gerais. Brás later became a member of the Republican Party of Minas Gerais. He held the positions of mayor, state and federal congressman, and governor in Minas Gerais. Between 1910 and 1914, he occupied the vice presidency, going on to become president of Brazil from 1914 to 1918. Brás died in Itajubá, Minas Gerais on 15 May 1966.

2 Brás and the Brazilian Declaration of War↑

During the first decade of the 20th century, the United States had replaced England as Brazil’s main commercial and diplomatic ally. Brazilian economic and geopolitical interests, derived from its relationship with the United States, led Brás to become a defender of freedom and democracy in the Western world, values identified with that northern power. Therefore, he advocated Brazil’s alliance with the United States and the Triple Entente.

Brás ended Brazilian neutrality after the United States declared war on Germany. He demanded retaliation against Germany for the German attacks on Brazilian commercial vessels that began in April 1917. Under Brás, several German merchant ships anchored in Brazilian ports were seized. On 26 October 1917, his administration declared war on Germany. After the Inter-Allied Conference in Paris at the end of the year, Brás offered naval aid to the Allies in the Atlantic Ocean, including airmen and doctors.