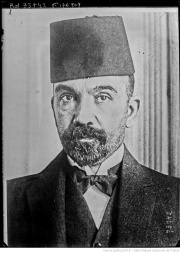 Cemal Azmi was an Ottoman official who served during the Great War as governor (vali) of the province (vilayet) of Trebizond. Being the mastermind of the Armenian genocide in this province he earned the surname of the butcher of Trebizond. His attitude toward the province’s numerous Orthodox Christians (Rum) is rather discontinuous, evolving from a protector to a persecutor.

Mehmet Cemal Azmi Bey (1868-1922) was a gifted bureaucrat and very efficient in the performance of his duties. He had been twice decorated for the services he provided to the army during the war and even rewarded with an honorary military rank. Career and public service were certainly more important to him than ideology.

According to the Chrysanthos, Archbishop of Athens (1881-1949), who by his own admission was Cemal Azmi Bey’s sincere friend, the latter “was in essence an ‘Old-Turk’ [παλαιότουρκος: attached to the Empire’s traditional principles] who became a Young-Turk, because only as such he could prevail and act”.[1] In fact Cemal Azmi was a late member of the Committee of Union and Progress (CUP). It is from 1913 onwards that he developed strong ties with the CUP leaders for having actively participated in the coup of 23 January 1913, called the “Raid on the Sublime Porte”. These ties made of Cemal Azmi both a powerful governor and a docile organ of the committee.

Before the war, Cemal Azmi served as sub-district governor (kaymakam) and district governor (mutasarrıf) in different places in Anatolia and especially in the Balkans. When he was the kaymakam of Avrethisar/Kilkis (1902-1907), he headed an inquiry commission concerning the violent repression of the Ilinden Uprising (1903) in the sub-district (kaza) of Razlog, thereby contributing to the acquittal of his fellow Kaymakam of Razlog, Hasan Tahsin Bey (1870-1934), who was known as Uzer after 1934, and was later governor of Erzurum.

Cemal Azmi Bey was named governor of Trebizond on 29 July 1914: the day after the beginning of the Great War and four days before the ratification of the secret Ottoman-German Alliance (2 August 2 1914). The province of Trebizond – along with that of Erzurum – was situated on the Ottoman-Russian border and was therefore expected to play a crucial role in the upcoming war. Mehmed Talat Bey (1874-1921) and the CUP’s civil faction wanted to have a trusted person there and Cemal Azmi Bey, a putschist of the “Raid on the Sublime Porte”, had the required credentials.

During his first month in Trebizond, Cemal Azmi was joined by different members of the notorious Ottoman Special Organization (Teşkilat-ı Mahsusa). Being initiated into the organization, he put all of the vilayet’s facilities at the service of its paramilitary activities. Cemal Azmi’s arrival in Trebizond started his relationship of good understanding and close collaboration with the Orthodox Metropolitan Chrysanthos. As the latter recalls in his memoirs, due to his advice the vali adopted a series of measures which protected the Greek Orthodox of Trebizond from the hardships of the war. These measures, Chrysanthos wrote, “were the fruit of the good relations that I meticulously developed with the vali Cemal Azmi Bey, whom I liked very much for his natural behavior, his somehow savage nature and for his willingness to accept all of my legal requests”.[2]

During the Armenian Genocide↑

The positive portrait of Cemal Azmi drawn by Chrysanthos is at odds with the testimonies concerning the role played by him in the Armenian genocide. Cemal Azmi was tried in absentia in 1919 in Istanbul for the Armenian massacres of 1915. According to the tribunal’s verdict:

The former vali of Trebizond Cemal Azmi Bey, acting in accordance with secretly given orders, and the responsible secretary [of the CUP] for Trebizond [Yenibahçeli] Nail Bey, who was [also] obeying secret orders and who acquired power from his association with the vali, had set the plan for the murder and annihilation of the Armenians, in line with the orders that were secretly transmitted [to them], while they were apparently applying the displacement law.[3]

According to the verdict’s text, the deported Armenians left the city escorted by gendarmes and criminals. When they moved away from the city, the men were separated from the women and were robbed and savagely murdered by bands formed by people similar to the convoys’ escorts. The bandits stole women’s jewellery and committed mass rapes.

This account is confirmed by the memories of the Armenian survivors as well as by Muslim witnesses, foreign observers and Greek Orthodox sources. Additionally, the deported Armenians were systematically massacred in the entire sub-districts of the vilayet of Trebizond. Apparently, Cemal Azmi Bey aimed to ensure that the above-mentioned “secretly transmitted orders” should be strictly applied by all the officials under his orders. As for the origin of these “secret orders”, according to the Metropolitan Chrysanthos as well as to Muslim witnesses and Armenian survivors, they were transmitted to Cemal Azmi and to Yenibahçeli Nail Bey (?-1926) by Bahaeddin Şakir (1874-1922), a member of CUP’s Central Bureau who arrived in Trebizond a few days before the deportations and massacres and had long meetings with Cemal Azmi and Yenibahçeli Nail.

Trebizond was occupied by the Russians on 18 April 1916. When leaving Trebizond, before the advancing Russian Army, Cemal Azmi entrusted Chrysanthos with the city’s temporary government. On that occasion, Chrysanthos recalls, Cemal Azmi pronounced the following grandiloquent words: “We took this city from the Greeks and we are giving it back to them”.[4] Subsequently he transferred the province’s siege to the non-occupied town of Ordu.

Personally offended, Cemal Azmi tried to launch a witch hunt against the Greek Orthodox of Giresun and their alleged protector, Vehip Pasha, but to no avail. Due to the martial law, the local power lay at that point with the army command and not with the public administration. Cemal Azmi’s shift of attitude towards the Greek Orthodox is reminiscent of Tahsin Bey’s (Uzer) attitude toward the Ottoman Armenians. During his governorship of Van, Tahsin Bey appeared friendly and accommodating towards the Armenian representatives and political leaders. However, once installed as the new vali in Erzurum in late 1914, Tahsin followed Talaat’s instructions and cooperated with the leaders of the Special Organization based in Erzurum, thus paving the way to the genocide.

Finally, on 26 July 1917, the three non-occupied sub-districts of the province of Trebizond (Tirebolu, Giresun and Ordu) had been annexed to the administratively independent district (sancak) of Canik. Therefore the existence of the vilayet of Trebizond remained only nominal and Cemal Azmi Bey was not given a new administrative post. Feeling frustrated, he retired from public service and, in the spring of 1918, he migrated with his family to Berlin. There he kept a tobacco shop, which became a meeting place for the CUP leaders who fled to Berlin after the Armistice of Mudros (30 October 1918) such as Talat and Bahaeddin Şakir. He did not participate in Ismail Enver Pasha’s (1881-1922) post-war pan-Turkist endeavours. He was tried in absentia and was sentenced to death on May 1919 in Istanbul for the murder and relocation of the Armenians of Trebizond. Cemal Azmi Bey was assassinated in 1922 in Berlin’s Uhlandstraße together with Bahaeddin Şakir by two Armenian revolutionaries, as part of the Operation Nemesis.