Petr Nikolaevich Wrangel was a Russian general and political leader. He participated in the Russo-Japanese War, the First World War, and the Russian Civil War. He was one of the leaders of the White movement in the south of Russia and founder of the Russian All-Military Union (ROVS), the largest military-political organization of exiled Russians.

Petr Wrangel (1878-1928) was born into a noble family of German origin and was of the Orthodox faith. He received his early education in the Rostov non-classical secondary school and then at the Mining Institute in St. Petersburg. After graduating in 1901, he entered military service as a volunteer in the Life Guards Mounted Regiment. In 1902 he passed the test for a commission in the Nikolaev Cavalry School (St. Petersburg) and was accepted as a reserve cornet [lieutenant]. He also served as an official for assignments under the Governor General in Irkutsk. With the start of the Russo-Japanese War (1904) he re-entered military service in the 2nd Verkhneudinsk Regiment of the Transbaikal Cossack Army. He distinguished himself in battles in Manchuria and then served in the 55th Finland Dragoon and Life Guards Mounted Regiments. Already a staff captain, he entered the Nikolaev General Staff Academy, from which he successfully graduated with attachment to the General Staff in 1910. One year later, in 1911, he mastered the course of the Officer's Cavalry School.

Wrangel fought in the First World War as a captain and commander of a cavalry squadron. In August 1914 he distinguished himself in battles in East Prussia. During a cavalry attack near Kaushen he seized an enemy battery and was awarded the St. George Order with laurel branch, 4th Degree. He was soon promoted to the rank of colonel and in June 1915 was awarded the St. George Sword for combat services. Beginning in October 1915 he fought on the Southwestern Front as commander of the 1st Nerchinsk Regiment of the Transbaikal Cossack Army. His regiment distinguished itself during the Brusilov Offensive in the spring and summer of 1916 in battles against the Austro-Hungarian forces.

In January 1917 he was promoted to the rank of general-major for distinction in battle. He was also appointed commander of the 2nd Ussuri Cossack Mounted Division and later commander of the 7th Cavalry Division and the Composite Cavalry Corps. He received the St. George Cross, 4th Degree for a successful operation on the river Zbruch in the summer of 1917.

Wrangel reacted negatively to the fall of the monarchy following the Russian Revolution in 1917 but continued his service under the bourgeois Provisional Government, being strictly opposed to the Councils of the Soldiers’ Deputies that emerged in the army detachments. After the Bolsheviks came to power he resigned from the army and left for Crimea, where he lived in Yalta. Here Wrangel was arrested following the decision of the local soviet; however, he was soon released. Joining the White Volunteer Army he became chief of the 1st Mounted Division and took part in the 2nd Kuban Campaign. He then headed the 1st Mounted Corps and was made general-lieutenant in November 1918 for leading successful combat operations against the Red Army. In January 1919 he was appointed Commanding General of the Caucasus Army in the Armed Forces of the South of Russia ([VSIuR] AFSR); Anton I. Denikin (1872-1947) was the Commander-in-Chief. The seizure of Tsaritsyn (now Volgograd) in June 1919 was a considerable victory for Wrangel's troops.

Wrangel actively opposed Denikin’s strategic plans for a march on Moscow and instead considered an offensive along the Tsaritsyn line to be the most promising. He believed that a deeper advance to the east would allow for their forces to unite with the armies under Supreme Ruler Alexander V. Kolchak (1874-1920), thus increasing the overall military potential of the White forces. Denikin insisted on taking Moscow as quickly as possible and thought that Wrangel's statements were determined not by military strategy but by his personal ambitions. The deepening disagreement of the two White Guard leaders ended with Wrangel’s removal from the command of the AFSR in December 1919 and his retirement in February 1920. Wrangel then left with his family for Constantinople.

In spring of 1920 when, after a series of defeats, Denikin’s forces had to be evacuated from Novorossiysk to Crimea, Denikin chose to resign from the position of Commander in Chief and the Military Council of the AFSR invited Wrangel to take his place. On 4 April 1920 he arrived in Sevastopol on a British battleship and assumed command of the remains of Armed Forces of the South of Russia, soon renamed the Russian Army.

Wrangel as the “Ruler of South Russia”↑

At the head of the anti-Bolshevik government of Crimea, Wrangel, as "the ruler of the South of Russia" pursued a more liberal policy than Denikin. He decided not to undertake a new march on Moscow, but rather to create a White state in Crimea based on democracy and a stable economy. He hoped this would serve as an example for all of Russia and eventually allow the entire country to be freed from the Bolsheviks. Wrangel advocated a federal structure for a future Russia and granting broad rights to Ukraine, the Cossacks, and the peoples of the Caucasus. His government began to carry out agrarian reforms in the peasants' favor and adopted a series of laws in the workers' interests. In April 1920 Wrangel's troops defeated Red Army units and seized the Northern Tavria with the goal of creating a base to defend Crimea.

After a successful Red Army offensive in the region of Perekop in November 1920, Wrangel was forced to order the evacuation of civilians, government institutions and the remnants of the army from Crimea. The estimates for the number of people evacuated from Crimea range from 56,000 to 146,000. 126 ships carried them to the Gallipoli Peninsula and the Greek island of Lemnos.[1]

Wrangel and his staff landed in Constantinople, where he stayed from the end of 1920 until 1922, when he left for Sremski Karlovci in the Kingdom of the Serbs, Croatians, and Slovenes. In 1924 the Russian All-Military Union (ROVS) was organized under his leadership with the goal of consolidating and supporting all military émigrés from Russia and continuing the political struggle against Soviet power in the motherland.

In 1927 Wrangel and his family moved to Brussels, where he worked as an engineer. In April 1928 he fell ill with tuberculosis and passed away on 25 April. His sudden death sparked rumors that he had been intentionally infected by the Bolshevik intelligence agents. The general was initially buried in Brussels, but in October 1929 his ashes were moved to Belgrade and buried in the Orthodox Church of the Holy Trinity.

Wrangel had great authority in exile and showed himself to be a skilled organizer and leader. He left a manuscript of memoirs, which General Aleksandr Aleksandrovich von Lampe (1885-1967) published in Berlin several months after his death in the fifth and sixth collections of "Beloe delo. Letopis' beloi bor'by [The White Cause. A chronicle of the White struggle]." Relatives later sent Wrangel's memoirs to be stored in the Archives of the Hoover Institute of War, Revolution, and Peace at Stanford University in the USA.

On 14 September 2007, following the initiative of the Russian government, a bust and monument to Wrangel, sculpted by Vasilii Nikolayevich Azemsha, was unveiled in Sremski Karlovci, Serbia.

Contemporary assessments of Wrangel’s role in the wars vary. Some researchers consider him a Russian patriot. His sociopolitical activity after the Civil War with the aim of consolidating Russians in exile and his continued struggle against Soviet power are also assessed favorably.[2] Those who hold the opposite point of view consider Wrangel one of the "reactionary" generals of the White movement whose strategic mistakes in the military and political spheres led to the defeat of the White forces and their evacuation from Crimea.[3] 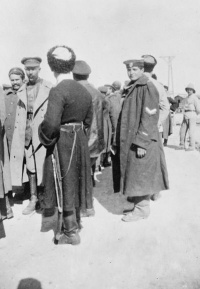