The First World War, the Russian revolutions of February and October 1917, and the ensuing Civil War created a wave of emigration from the territories of the Russian Empire into Western and Central Europe and Chinese Manchuria. Émigré life was marked by poverty and uncertainty, bitter political disputes, and a cultural flourishing.

Emigration implies permanent departure from one country and settlement in another and suggests a choice by the émigré not to return to the native country. Émigrés are thus differentiated from refugees, who are seen as people forced from their homeland in abnormal circumstances, usually under threat of violence, who will return once normal life resumes. However, in the case of those who left the Russian Empire in the aftermath of the First World War, Russian revolutions and Civil War, the line between émigré and refugee was blurred. Most Russian subjects who ended up living outside the borders of the empire had been captured as soldiers or had fled and sought refuge from military defeat, hunger, deprivation, or political persecution. It was frequently unclear to international relief organisations and authorities in the country of refuge whom to categorise as a prisoner of war or refugee awaiting repatriation and who was an émigré who would not return. Those who remained abroad often resettled several times in different countries and considered themselves temporary exiles, expecting to go back as soon as the Bolshevik regime collapsed.

The Russian Empire was a country from which relatively few people emigrated until the 1890s when increasing numbers left for Western Europe and the United States, among them students attending foreign universities, liberal and socialist activists pursuing opposition to Russia’s autocracy abroad and Jews escaping increasingly restrictive tsarist policies. In Germany, perceived connections between Russia’s political and Jewish émigrés intersected with mounting nationalism and anti-semitism. Fears of a revolutionary Jewish threat from the east contributed to a powerful Russophobia in the build-up to the First World War that undermined traditional dynastic bonds between the two countries. Some historians, such as Robert Williams, refer to emigration from Russian territory between 1881 and 1914 as a first wave, while others, including Marc Raeff, reserve this label for the great exodus proceeding from the upheavals of the early 20th century, with the second and third waves denoting emigration from the Soviet Union after the Second World War and in the 1970s and 1980s respectively.

Departure from Russia in the wake of the First World War took various routes. War prisoners from the Eastern Front were subjected to delousing and placed in camps across Germany. As late as November 1918, after six months of repatriation efforts, over 1 million Russian prisoners of war remained in Germany. Some left Russia in 1917, refusing to accept the outcome of the February or October revolutions. The major contingent of the emigration, however, was created by the Civil War, which ensued from the Bolshevik-led uprising of October. The defeated anti-Bolshevik White armies of General Anton Ivanovich Denikin (1872-1947) and General Baron Petr Nikolaevich Wrangel (1878-1928) were hastily evacuated with Allied assistance in 1919 and 1920 to Istanbul and then to South Eastern, Western and Central Europe. Some soldiers were accompanied by their families; assorted professionals, businessmen, intellectuals, Orthodox clergymen and personalities from the former imperial court and the Provisional Government also joined the exodus. Many evacuees perished during the crossing, while others endured disease, hunger and separation from their families. Civilian refugees also made their way across the unsettled borders between the new Soviet Russia and Poland, Finland, and the Baltic republics of Estonia, Latvia and Lithuania. Until 1922 governments and armies defeated by the Red Army in the east crossed over to the Manchurian town of Kharbin, under Chinese control, joined by Siberian Cossacks, merchants and peasants. The deportation of philosophers, lawyers, writers, historians and other intellectuals with their families by the triumphant Soviet regime in 1922-1923 added to the Russian community abroad.

Estimates of the number of citizens of the former Russian Empire settled around the world by 1921 range from 1 to 3 million. Precise figures cannot be ascertained due to the chaotic circumstances of departure, patchy record keeping, illegal settlement, and the constantly changing composition of émigré communities. Émigrés shared the material hardships of their countries of refuge in the 1920s and 1930s. Life was relatively cheap at first in Germany; jobs were hard to find but the low value of the mark meant savings and foreign currency disbursements went a long way. Beginning in 1923, however, inflation and political upheaval prompted an exodus of the Russian diaspora from Germany. Paris, Prague and Kharbin became the nuclei of Russian life abroad. In all countries the émigrés suffered particular difficulties arising from the loss of their belongings, damage to their health sustained en route, employment and welfare discrimination that forced many into poorly paid work to which they were unaccustomed, and from the insecurity of their legal position as foreigners, especially when the Soviet regime was formally recognised by other countries and nationalistic moods heightened. The penury, uncertainty and isolation of émigré existence were alleviated by assistance from international organisations, foreign governments and philanthropists, diplomatic missions of the former Russian regimes, and by efforts of the émigrés themselves. The Czechoslovakian government, for example, implemented the Russian Aid-Action programme, while the Nansen Committee of the League of Nations issued an identity document, the Nansen passport, to émigrés rendered stateless by the Soviet government’s refusal to acknowledge them, allowing them to travel and apply for visas and residence permits. Voluntary organisations such as the American-based YMCA and Red Cross distributed food, clothing, medical aid and educational materials and established nurseries and orphanages. Émigré institutions such as the reconstituted Union of Zemstvos and Towns, or Zemgor, previously responsible for running much of Russia’s war effort, set up clinics and schools. The Veterans Union, established by General Wrangel, and numerous professional associations helped members resolve both legal and practical problems.

Historians tend to evaluate the Russian emigration either as a political phenomenon or in terms of its contribution to world culture. Robert Williams, for example, groups the emigration in Germany into monarchists, liberals, and socialists. He examines abortive attempts by monarchist army officers to mobilise Russian prisoners of war for anti-Bolshevik intervention in the early days of emigration and the involvement of émigrés with the far right and left in German politics. He concludes, however, that the political goals of émigré factions proved divisive daydreams and were supplanted by a flurry of publishing that left a lasting impression of Russia as a source of cultural renewal for the West. Similarly, scholarly works on individual émigrés who had been prominent political figures in Russia, such as Aleksandr Fedorovich Kerenskii (1881-1970), treat emigration as a sad epilogue, while studies of cultural figures such as author Vladimir Vladimirovich Nabokov (1899-1977), artists Vasilii Vasil’evich Kandinskii (1866-1944), Marc Zakharovich Chagall (1887-1985), and the composer Igor Fedorovich Stravinskii (1882-1971) highlight their impact on the creative scene in the west.

A third interpretation of the significance of the emigration is as an alternative Russia. Marc Raeff argues that those who emigrated became a society in exile, a Russia abroad. This society contained representatives of most classes of prerevolutionary Russia, from ruling elites to intellectuals to craftspeople, workers and even peasants (although not in the same proportions), and replicated Russia’s ethnic and religious diversity, including Ukrainians, Russian Germans, Jews, Armenians and others, as well as Orthodox ethnic Russians. The émigrés, moreover, were committed to carrying on a meaningful Russian life, passing on their culture and traditions through education, newspapers and journals, and, for some, a renewal of the Orthodox faith. Raeff, like historian Gleb Struve, identifies émigré literary and artistic endeavour as a branch of Russian culture, vital for continuing and disseminating modernist trends that were suppressed in the Soviet Union. Aaron Cohen has emphasised the importance of a Russia abroad in memorialising the First World War in public sites, writings and celebration, while inside Russia the war’s legacy was largely ignored in the mythologising of the October revolution, and later the Second World War, as foundational events. The cohesion of exiled Russian society, however, was undermined within a few decades by geographic dispersal, demographic decline, and the consolidation of Bolshevik power, which weakened the idea of sustaining an alternative Russia in readiness for return and prompted cuts in foreign aid to the émigré community. Furthermore, the political repression by Adolf Hitler (1889-1945) in Europe and the Japanese in China, combined with the assimilation of children and later émigré waves, also led to a weakened émigré community. 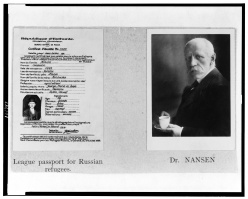