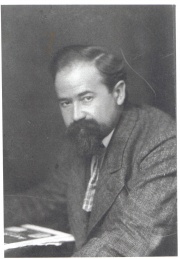 Weber, Alfred
University professor, adviser at the imperial office of the treasury 1916-1918
Born 30 July 1868 in Erfurt, German Confederation
Died 02 May 1958 in Heidelberg, Germany

As an adviser in the imperial office of the treasury (1916-1918), the Heidelberg economist Alfred Weber helped establish Poland and Lithuania as satellite states under the hegemony of the German Reich (Mitteleuropa). During the Weimar Republic, he fought against communists and Nazis and engaged in favour of democratic values. After 1945, he strove for the re-democratisation, re-unification and neutralization of Germany.

After studying political economy at the University of Berlin, Alfred Weber (1868-1958) was appointed professor at the German University of Prague in 1904. Three years later, he left for the University of Heidelberg and in 1909 published his major economics work Standort der Industrien, Teil I. Reine Theorie des Standorts (“Theory of the Location of Industries”).

In August 1914, he voluntarily enlisted and, until May 1916, served as an officer at the Alsatian front. During this time, he published the propaganda brochure Gedanken zur deutschen Sendung (“Thoughts on the German Mission”) which focused upon Germany’s geographical and strategic position after the war. He also circulated a war aims memorandum that proposed the creation of Mitteleuropa, a vast federation of semi-independent states under German hegemony, which would stretch from western Russia to the Balkans.

In May 1916, he became an adviser in the office of the treasury, where he was engaged in the development of German Ostpolitik. In cooperation with the German-Baltic baron Friedrich von der Ropp (1879-1964), leader of the Liga der Fremdvölker Rußlands (League of Alien Peoples of Russia), he gained the support of Polish and Lithuanian activists as well as German politicians for the establishment of Poland and Lithuania as German satellite states. On 30 November 1917, together with Ropp, Matthias Erzberger (1875-1921), Reichstag deputy of the Catholic Centre Party, and various other influential Germans, he founded the Deutsch-Litauische Gesellschaft (German-Lithuanian Society). The task of this association and of its official newspaper, Das Neue Litauen (DNL), was to win over public opinion in Germany and Lithuania for the establishment of a Lithuanian state under German control. Through his personal contacts and in articles in DNL, Weber emphasized the advantages of creating a satellite Lithuania against the opposition of German annexationists like Erich Ludendorff (1865-1937) and Lithuanian left wing politicians like Steponas Kairys (1879-1964). Finally, under German pressure, the opposition in Lithuania was forced to acquiesce, and on 3 March 1918, a semi-independent Lithuanian state with close ties to Germany was proclaimed.

On 29 November 1917, Henry Petty-Fitzmaurice, Marquess of Lansdowne (1845-1927), leader of the conservative opposition in the British parliament, published a dramatic appeal against the prolongation of the war, which also asked the government to encourage the German peace party. Only Crown Prince Max von Baden (1867-1929), president of the first chamber of Baden, indirectly replied to Lansdowne in a speech on 14 December 1917 by pointing to currents in Britain striving for a negotiated peace. Subsequently, a group of liberal publicists, among them Alfred Weber, organized a public campaign in favour of a separate peace with Britain. Weber authored a memorandum for General Erich Ludendorff, Germany’s most important military and political leader at that time, asking him not to jeopardize the realization of Mitteleuropa with an uncertain offensive, but to permit peace negotiations with Great Britain. Ludendorff flatly refused, despite two interventions from Prince Max.

After a short engagement as co-founder and provisory president of the liberal Deutsche Demokratische Partei (German Democratic Party) at the end of 1918 and a fight against the Spartacus insurrection in January 1919, he resumed his courses at the University of Heidelberg and, in speeches and articles, warned against the coming Nazi dictatorship. In protest against Adolf Hitler’s (1889-1945) take-over in March 1933, Weber retired prematurely, published his main sociological work Kulturgeschichte als Kultursoziologie (Cultural History as Cultural Sociology) abroad and, in 1943, joined a local resistance movement. After 1945, he contributed to the establishment of a democracy in Germany. His political efforts to prevent the partition of Germany and to re-unify it as a neutralized state failed.