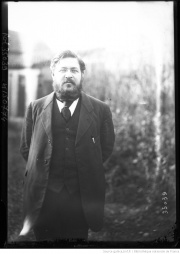 Albert Thomas was a French socialist who served as minister of armaments in the French government during the war. In the postwar period, he became the first director of the International Labour Office.

Like many others of his generation, Albert Thomas (1878-1932) came to politics in the aftermath of the Dreyfus affair. As a student of history at the prestigious École normale supérieure (ENS), and influenced by its librarian, Lucien Herr (1864-1926), he joined the moderate wing of the socialist party and soon abandoned a possible university career for political activism and journalism. Thomas, a specialist in labour and municipal affairs, was a convinced reformist, more interested in practical reform than in revolution. Elected deputy in 1910 and mayor of Champigny-sur-Marne in 1912, Thomas soon became one of the party’s leading figures of the younger generation, gathering around himself a network of young intellectuals committed to social reform.

When the war broke out, Albert Thomas was mobilised and served as a second lieutenant in France’s territorial army. He was called back to Paris in September 1914 to serve in the government services, first in Marcel Sembat’s (1962-1922) Ministry of Public Works, than in Alexandre Millerand’s (1859-1943) War Ministry, where he was responsible for the reorganization of French arms production. In May 1915, having proved his organizational skills, Thomas became himself a member of the government, first as under-secretary for artillery and munitions in the War Ministry, then, in December 1916, as head of the newly formed Armaments Ministry (ministère de l’armement).

His activity as a minister was twofold: First, he had to adapt the French arms industry to the necessities of industrial warfare; that is, to increase considerably the production of weapons and munitions. He organized the return of qualified workers, mobilized at the beginning of the war (Loi Dalbiez), back to their workplaces. In doing so, Thomas profoundly modernized the French industrial system by promoting the Taylorisation of the French war industries, and by co-ordinating and centralizing the distribution of raw materials. Second, Thomas tried to improve the working conditions in the arms industry and use his power to promote a certain state interventionism in labour affairs. He recognized trade unions as the legitimate representation of the workers. Supervised by the state, labour questions such as salaries or working hours should be resolved by collective contracts between employers and workers. Even if the immediate results of this policy were limited, it was an important means for preventing social unrest and keeping the “home front” working.

Thomas was less successful on the political level. In 1917, a diplomatic mission to Russia to reinvigorate the Russian war effort after the February Revolution did not bring any tangible results. In the meantime, tensions within his socialist party grew steadily and his influence among the party’s rank-and-file declined. When, in September 1917, the French socialist party, the Section Française de l'Internationale Ouvrière (SFIO), decided to leave the union sacrée, Thomas resigned from his ministry, even if this went against his personal convictions: party discipline prevailed.

More than any one else, Albert Thomas embodied the socialist participation in the union sacrée. But by the end of the war, when pacifists had gained the majority inside the SFIO, he had become an outsider in his own party. Unpopular in his home department, he had to move to the Tarn in southwestern France to be re-elected deputy in the general elections of 1919. Thomas ceased to play a decisive role in a weakened and highly fragmented party that was no longer able to integrate its different ideological factions. The creation of the International Labour Organization (ILO) as part of the Versailles peace treaty offered him the possibility of a second career. Thanks to the commitment of the British Premier David Lloyd George (1863-1945) and with the support of the French trade unions, Thomas was elected as the first director of the permanent International Labour Office. In this position, which he held until his death in 1932, Albert Thomas was able to continue his work for social reform on an international level.