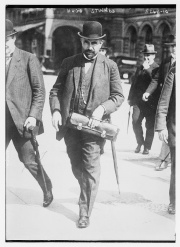 Hugo Stinnes was a highly successful and politically influential heavy industrialist. During the First World War, he adopted a German nationalist position and advocated the colonisation of Belgium and parts of France. After the defeat, Stinnes negotiated with both the trade unions and Germany’s former enemies, while also flirting with authoritarian ideas.

Hugo Stinnes (1870-1924) was an exceptionally influential businessman in early 20th century Germany. His career began as a coal merchant in the Ruhr area, before he became a major heavy industrialist in the two decades before the war. Moreover, he branched out by importing wood from Russia and iron ore from Sweden, as well as by spearheading regional electrification and public transport. His entrepreneurial skills were matched by a knack for cooperating with fellow industrialists and for networking with bankers and politicians.

Despite his transnational outlook, Stinnes turned into a staunch nationalist once the First World War began. Adapting to, and striving to shape, a drastically altered environment, he produced for armament purposes and advocated the colonisation of Belgium and parts of France. Later on, he supported the authoritarian approach led by Paul von Hindenburg’s (1847-1934) and Erich Ludendorff’s (1865-1937) third Supreme Command. He also supported Germany’s decision to launch unrestricted submarine warfare, and lobbied for the forced labour of young Belgian men in Germany.

A Symbol of Weimar Business↑

After the Empire surrendered and gave way to the Republic, Stinnes again adapted. He negotiated a compromise with the trade unions and sought an understanding with France and Britain, albeit on German terms. Complex arrangements and new investments enabled his businesses to flourish during inflation – so much so that he came to epitomise this turbulent period. However, in 1923 he failed to find a means against the occupation of Germany’s industrial west by France and Belgium, and he also flirted with the radical right. Throughout his career, Stinnes viewed politics from the perspective of a uniquely imaginative and often ruthless businessman.