Based in Paris, the American Expeditionary Forces (AEF) newspaper, Stars and Stripes, debuted on 8 February 1918 and ran for seventy-one weeks. The AEF commander, General John J. Pershing, requested the newspaper be established to improve morale in occupied France. The paper was written by and for servicemen.

Stars and Stripes began as a modest, eight-page weekly. Lieutenant Guy T. Viskniskki (1876–1949) founded the paper after learning that American Expeditionary Forces (AEF) soldiers desired, more than anything, accurate news from home. Thus, Viskniskki outlined several objectives of the paper that remained throughout World War I. These goals included providing the latest news from home, keeping soldiers abreast of AEF news, and publishing cartoons and humorous writing. Further, the paper would remedy AEF General Headquarters’ (GHQ) concern that the heterogeneous nature of its armed forces in France impinged on morale. The paper, by providing stylistically consistent news to soldiers scattered from Neufchâteau to Lorraine to Bordeaux, would help create a more homogenous Army culture and bolster the men’s sense of belonging to the AEF.

Issues of censorship arose after the paper’s initial conception. For Viskniskki, General John J. Pershing (1860–1948), and others, Stars and Stripes constituted a form of internal propaganda. The paper’s Board of Control operated in Paris and was staffed by officers, including Viskniskki, who assiduously removed any content thought to encourage discontent among soldiers. Brilliant journalists, including Harold Wallace Ross (1892–1951) of The New Yorker, chaired the paper’s editorial board. Throughout the war, the editorial board engaged with the Board of Control and GHQ in a three-way tug-of-war over appropriate content. In fact, Captain Mark S. Watson, the second officer-in-charge of the Board of Control, bucked at GHQ’s attempt to clean up slang and censor cartoons. Although the paper’s content was closely monitored and culled, the editorial board and Board of Control tirelessly cultivated the image that Stars and Stripes was under the complete discretion of its enlisted staff.

Stars and Stripes editors hired writers for educational stories that reinforced fraternal bonds between Americans and their French allies. The paper ran an “America in France” series in 1918, teaching American soldiers the history of Chateau-Thierry, Picardy, Cantigny, and Toul, among other French cities and provinces. To help Americans understand their purpose in France, the “America in France” articles stressed the cultural significance of these sites for the French people.

Another article, “Canned Monkey Meat Doesn’t Suit Yanks,” showed how the newspaper stressed commonalities between allies. Published in the 28 June 1918 issue of Stars and Stripes, the article described parallels between the French and American experience eating poor victuals, dubbed “monkey meat,” and also reminded American readers that the term “monkey meat” was borrowed from French slang.[1]

Alongside didactic material, sports, and entertainment news, humor was another important tool that editors and contributors used to bolster the morale of soldiers. Short syndicated cartoon strips, or funnies, debuted in the first issue of Stars and Stripes. The first cartoon, entitled “Volunteer Vic’s Big Idea,” depicted an AEF soldier named Vic fastening a drain pipe to his steel helmet to keep the incessant rain from running down his jacket.[2] The rain was an inconvenience that most soldiers would have found relatable.

Editors made sure humor resonated with the average soldier by employing servicemen, like Private Albian “Wally” Wallgren, to draw cartoons that reflected the multiethnic and racially diverse AEF. Wallgren’s 25 April 1919 cartoon, entitled “If We All Ranked Equal,” parodied the Bolshevik Revolution by depicting a group of rankless soldiers fighting over where to sit and sleep, and even allowing caricatured African-Americans to defy racial segregation. A black soldier in the cartoon casually approaches a U.S. Army major in his jeep, saying: “Hol’ on dar, Majoh—ah reckon ah’ll take a lil ride along wiff yoh!”[3]

These tongue-in-cheek articles abounded in the paper. In another instance, American soldiers who doubted the AEF’s capacity to defeat the Germans were labeled German spies, and those who perpetuated rumors of defeat were dubbed “asses.”[4] The editors infused the paper with humor and satire to ameliorate readers’ hopelessness, and reinforce racial and ethnic stereotypes and norms.

Stars and Stripes eventually reached an audience of some 2 million servicemen during World War I, a testament to its popularity. While the AEF suspended publication after war’s end, the paper’s success established a precedent for war journalism that would follow in its later editions during World War II and beyond. 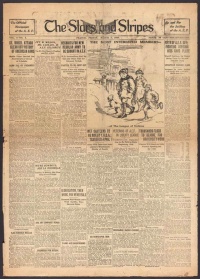 The Stars and Stripes, Official Newspaper of the American Expeditionary Forces (A.E.F.)