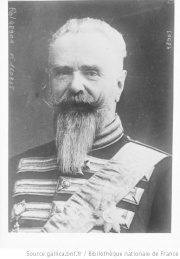 Boris Shtiurmer was Prime Minister from January to November 1916, also serving as Interior Minister between March and July 1916 and Minister of Foreign Affairs from July to November. Denunciations of Shtiurmer in Russia’s parliament, or Duma, for incompetence and rumoured treason forced his resignation and destabilised the tsarist regime.

Boris Shtiurmer (1848-1917) was a hereditary nobleman and career bureaucrat. He served as provincial governor in Iaroslavl’ and Novgorod; as a member of the State Council, the highest advisory body to the Tsar; as head of department in the Ministry of the Interior; and as Master of Ceremonies at the imperial court. In January 1916, a few years short of his seventieth birthday, he was appointed by Nicholas II, Emperor of Russia (1868-1918) to the position of Chairman of Russia’s Council of Ministers. Shtiurmer’s sudden elevation to preside as Prime Minister over the wartime government came at a time when the monarch had taken over as Commander-in-Chief of the army and was often away at Headquarters. In March 1916, Shtiurmer also assumed the portfolio of Minister of Internal Affairs, a post that traditionally entailed responsibility for shaping domestic policy, as well as ensuring domestic security. He resigned this post in July to succeed Sergei Dmitrievich Sazonov (1860-1927) as Minister of Foreign Affairs, a role Shtiurmer combined with the premiership until his departure from government in November 1916. When the army’s Chief of Staff, General Mikhail Vasil’evich Alekseev (1857-1918), proposed to the Tsar in June 1916 that he establish a Minister of National Defence with extensive authority to direct the war effort, Nicholas II instead conferred on Shtiurmer additional, ill-defined powers to coordinate measures at the front and in the rear. There is no evidence that these powers were ever used and they were probably not welcomed by the Prime Minister, but the impression given was that Shtiurmer had risen to the status of virtual dictator.

Scholars offer varying explanations for Shtiurmer’s rapid promotion. Commentators such as émigré academic Michael T. Florinsky (1894-1981), who served in the Russian army during the war, and Sir Bernard Pares (1867-1949), the British historian who spent time with the Russian army and at the British Embassy in Petrograd, have described Shtiurmer as an obscure, disreputable and spent force at the time of his appointment to Chairman of the Council of Ministers. They ascribe the decision to the machinations of Alexandra, Empress, consort of Nicholas II, Emperor of Russia (1872-1918), the holy man Grigorii Efimovich Rasputin (1869-1916), and their coterie, who conspired to place men who would be their puppets in influential positions. This view of Shtiurmer’s premiership as the work of Rasputin, widely believed at the time, is oft repeated in the historiography of late imperial Russia. Dominic Lieven, however, has cast doubt on Rasputin’s influence. Rather, he attributes Shtiurmer’s rise to the small pool of candidates available, most of whom were mediocre and gerontocratic. The emperor, like his wife, preferred to deal with old men who would loyally execute imperial policy and not disagree with the monarch, threaten to resign, or gang up with the parliament, the Duma, against him. Nicholas had, on a number of previous occasions, considered advancing Shtiurmer to a prominent position, including Minister of the Interior or Mayor of Moscow. In 1916, when the whole country was mobilised for war and Nicholas could not completely disregard public opinion, Shtiurmer had the added advantage of professing both subservience to the Tsar and a desire to improve relations with the elected Duma deputies.

Pares asserts that Shtiurmer’s declarations of willingness to cooperate with the Duma were pure dissimulation by a dishonest reactionary looking to keep the parliament quiet. Whether or not this was the case, many Duma representatives did not welcome the replacement of worn out conservative Prime Minister Ivan Logginovich Goremykin (1839-1917) with another aged tsarist functionary. All but those on the extreme right declined Shtiurmer’s invitations to a reception to celebrate his appointment. Even the historic appearance of the Tsar to present the new head of government before the Duma did not generate much enthusiasm for his chosen premier. Exasperated by the attitude of the legislature, Shtiurmer resorted to threats to dissolve it, which only exacerbated opposition to his government. At a dinner in May 1916 attended by ministers and members of Russia’s legislative chambers, Duma President Mikhail Vladimirovich Rodzianko (1859-1924) lambasted Shiturmer’s government for its lack of leadership, ignorance, incompetence, self-interest, corruption, paranoia and repression, and claimed that in its relentless search for imagined revolutionaries it was breeding actual revolt.

The parliament was suspended in June but reconvened in November against a background of growing popular discontent at the regime’s failure to resolve wartime inflation and disruptions to supply of food and goods. All Duma parties except those on the far left and right had united in a Progressive Bloc demanding a government enjoying public confidence. At the opening session, Pavel Nikolaevich Miliukov (1859-1943), leader of the liberal Kadet Party, famously denounced the government under Shtiurmer for its lack of success in prosecuting the war and catalogued a string of abuses of power and rumours that the Prime Minister was considering betraying Russia and her allies by concluding a separate peace with Germany. After each accusation he repeated the question, “is this stupidity or is this treason?” Later, Miliukov would claim that he was unsure of the answer. As his speech spread in manuscript form out from the Duma across the country, his audience, already fired by satirical ditties besmirching the loyalty of the Prime Minister with the German sounding name, was inclined to believe it was treachery. Despite the absence of any evidence of dealings with Germany, Shtiurmer’s position had become untenable and he was forced to retire. His removal, however, was not enough to stave off revolution. When popular demonstrations in Petrograd toppled the tsarist regime in February 1917, the new Provisional Government arrested Shtiurmer. He died in the Peter and Paul fortress, the infamous prison housing political prisoners in imperial Russia.

History has not been kind to Boris Shtiurmer. Scholarship tends to reiterate damning assessments by contemporaries, such as the description of Shtiurmer by his predecessor as Foreign Minister, Sazonov, as a man who left a bad memory wherever he had occupied an administrative post. Notoriously the French Ambassador to Russia, Maurice Paléologue (1859-1944), characterised Shtiurmer as worse than a mediocrity, a person of third-rate intellect, mean spirit, low character and doubtful honesty, with a talent only for cunning and flattery. Judgements like these are reinforced in the historiography by references to shadowy incidents such as Shtiurmer’s involvement in clearing out the liberal elected local government of Tver’; an attempt once he became head of government to reassign 5 million rubles from the military fund to the office of the Prime Minister; and the manoeuvrings which accompanied his assumption of the position of Minister of Foreign Affairs. Assessments made of Shtiurmer at the time were not universally condemnatory, however. The American Academy of Political Science published a piece in the Political Science Quarterly of September 1916 depicting Shtiurmer as an administrator of energy and ability, if not of conspicuous liberal views. Historian Dominic Lieven surmises that he had been a competent provincial governor and was a loyal servant to the crown. Even Lieven, though, notes that as war leader, and virtual dictator, he was out of his depth. A man without a strong political programme, he became a symbol of the ineffectual wartime cabinet, with its revolving membership, enjoying neither the confidence of Tsar or people; a government, in the words of Sazonov, hanging in the air, without support from above or below. More damagingly, and unfairly, as Orlando Figes and Boris Kolonitskii explore, he embodied for the public their suspicions about dark and treasonous forces ruling Russia, suspicions which extended to the Empress Aleksandra and destroyed not just Shtiurmer but the entire imperial regime.