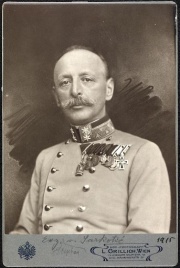 Stephan Baron von Sarkotić was an Austro-Hungarian general who had already made his mark as a political officer prior to the outbreak of World War I. During the war, he formulated different approaches to solving the South Slavic problem in the Danube Monarchy. However, due to the sustained attachment of Hungary’s ruling elite to the status quo, not a single one of his ideas could be realised.

A Different Answer to the South Slav Question↑

When Stephan Sarkotić (1858-1939) took office as commander-in-chief and governor of Bosnia and Herzegovina in early 1915, the Croat – born on 4 October 1858 – had already proven himself a typical representative of political military generals. Even as a young officer, Sarkotić had advocated the transformation of the unequal union between Hungary and Croatia into an equal connection. He also supported the integration of Dalmatia into Croatia-Slavonia.

As governor of Bosnia and Herzegovina, Sarkotić developed his own personal concept for a solution of the South Slav question in the Austro-Hungarian monarchy in accordance with his former attitude towards a modified Hungarian-Croatian relationship. He promoted an approach that would be compatible with the balance of power between Austria and Hungary, mapped in the Habsburg Empire’s dualistic structure dating back to 1867.

As a convinced loyal officer and Croat patriot, Sarkotić was strongly opposed to the “Yugoslav” political tendencies of his time, and consequently rejected any suggestion for the unification of Croats and Serbs in a centralised political body. Sarkotić’s highly developed sense of the difference between Croats and Serbs was accompanied by a deeper insight into the contrast between an “occidental” and “oriental” cultural sphere. If Sarkotić, in the context of the Austro-Hungarian discussions on the war aims, advocated integrating the occupied countries of Serbia and Montenegro into the monarchy, then he was primarily governed by the desire to exert a certain control over those countries that had promoted the political propaganda culminating in the Sarajevo assassination of Franz Ferdinand, Archduke of Austria-Este (1863-1914) on 28 June 1914.[1]

In the course of the war, Sarkotić modified particular parameters of his concept for the solution of the South Slav question. The most important of these modifications concerned Bosnia and Herzegovina, a territory annexed by Austria-Hungary in 1908. When he was received by Charles I, Emperor of Austria (1887-1922) on 10 June 1917, he suggested incorporating Bosnia and Herzegovina into Croatia, which itself was joined with Hungary, for the first time.[2]

Sarkotić’s solution was rejected in Hungary since the territorial extension that he claimed for Croatia-Slavonia was interpreted as supporting a “de facto abolition” of the Empire’s dualistic structure.[3]

When Sarkotić discussed the south Slav Question on 13 and 14 May 1918 with the Austro-Hungarian military governors of Serbia and Montenegro, he mentioned – as a secondary approach – an alternative to his “standard concept” for the solution of the South Slav problem: a reformed monarchy comprised of a union between an Austrian-Croatian and a Hungarian-Serbian state.[4] However, due to the Hungarian ruling elite’s sustained attachment to the status quo, not a single one of his ideas could be realised.