The Prochaska Affair was a diplomatic dispute between Austria-Hungary and Serbia, ostensibly concerning the fate of the Austro-Hungarian consul in Prizren. However, it carried deeper implications for the Austro-Hungarian efforts to prevent the Serbians from establishing a presence on the Adriatic Sea in northern Albania.

The Prochaska Affair was a diplomatic imbroglio between Austria-Hungary and Serbia that occurred during the First Balkan War. It involved the fate of Oskar Prochaska (1876-1945) the Austro-Hungarian consul in Prizren, and brought Austria-Hungary and Serbia to the brink of war. When the First Balkan War between the Balkan League, including Serbia, and the Ottoman Empire began on 17 October 1912, elements of the 3rd Serbian Army rapidly advanced into the Ottoman province (vilayet) of Kosovo. They entered the important town of Prizren on 30 October 1912.

At this point, some Serbs claimed that Prochaska and his associates fired upon their army. This seems highly unlikely. Prochaska was a seasoned diplomat with some experience in the Balkans. When the Serbs lodged a protest concerning Prochaska in Vienna on 8 November 1912, Austro-Hungarian Foreign Minister Count Leopold Berchtold (1863-1942) denied the charges, but offered to investigate them. The Serbian government, however, delayed its response to official requests from Vienna to begin the investigation.

On 19 November 1912, the Belgrade government finally granted permission for an Austro-Hungarian official to enter the territory controlled by the Serbian army. In the meantime, rumors about the fate of Consul Prochaska circulated throughout the Dual Monarchy, including stories that he had suffered emasculation or died in Serbian custody. Despite several communications from the Serbian government and the consul himself that all was well, the issue remained in doubt until Consul Prochaska arrived in Skopje on 26 November 1912 and met with his colleague.

On 13 December 1912, the Vienna government received the official report on the incident. Serbian military authorities in Prizren had apparently limited Prochaska’s freedom of movement. The Austro-Hungarian government then demanded satisfaction. Accordingly, Serbian Prime Minister Nikola Pašić (1845-1926) presented himself at the Austro-Hungarian legation in Belgrade on 21 December 1912 and apologized. He also agreed that the Serbian army would salute the Austro-Hungarian consuls in Prizren and in Mitrovica. Accordingly on 15 January 1913 in Prizren the Serbian Army performed a ceremony of atonement. Consul Prochaska attended in full dress uniform. Soon thereafter he departed to assume his new post as Austria-Hungarian consul in Rio de Janeiro, Brazil.

The fate of Consul Prochaska was intertwined with the larger issue of the Serbian advance to the Adriatic Sea through northern Albania and the strong Austro-Hungarian opposition to any Serbian presence on the Adriatic. This dispute led the Russian army to mobilize in the Kiev Military District and part of the Warsaw District bordering on Austria-Hungary in support of Serbia and the corresponding Austro-Hungarian military measures across the frontier in Galicia during November 1912. The adoption of military measures on both sides of the Austro-Hungarian-Russian frontier increased concerns throughout Europe that war could break out. This situation eased after Pašić indicated during his 21 December 1912 visit to the Austro-Hungarian delegation in Belgrade that Serbia would not seek an outlet on the Adriatic Sea in Albania. The meeting of the Great Powers’ ambassadors in London to manage the consequences of the Balkan Wars also played a role in mitigating this crisis.

The Prochaska affair was the first in a series of Austro-Hungarian conflicts with Serbia resulting from the Balkan Wars. On 10 April 1913, Pašić, under pressure from Austro-Hungary and the other Great Powers, withdrew Serbian troops from helping the Montenegrins in the siege of Scutari (Shkodër). Later that same year, on 18 October 1913, Austro-Hungarian Foreign Minister Berchtold dispatched an ultimatum to Belgrade demanding that Serbian troops evacuate the territories assigned by the London Ambassadors Conference to the new Albanian state. Although Pašić formally complied with the Austro-Hungarian demand, some Serbian forces remained in northern Albania. In this sense, the Austro-Hungarian ultimatum of 23 July 1914, which initiated World War I, was the fourth such attempt in less than two years to maintain influence in southeastern Europe.

A Forbearer of Future Conflict↑ 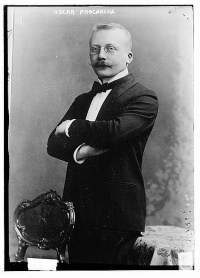