Not unlike its regional counterparts, the standards of press and journalism in Serbia during the Great War was problematic. Most of the no more than twenty newspapers in Belgrade operating at the time were already accustomed to biased reporting from the recent Balkan Wars, and have to be understood in such a context.

The Serbian press in the first decades of the 20th century resembled that in Central Europe, with satires, caricatures, short stories and pastiches, including a large amount of advertising, mostly appearing on the final pages of the dailies. Many (if not most) of the articles, even interviews of high-profile politicians, were signed credited to “the Editorial Office,” or simply “the Office,” so information on individual journalists has largely been lost; the only cases in which the writer was known were in printed government proclamations. Some newspapers suspended publication during the course of the war, such as the Srpske novine (Serbian Newspaper), which stopped publishing in 1914, and resuming again in 1919 after the conflict had ended. Others, such as Politika (Politics), have continued in circulation until today. Almost all of the printed press concentrated heavily on war reporting. Contemporary scholarship has, however, yet to produce detailed analyses of the early 20th century Serbian press.[1]

From the Balkan Wars to the Great War↑

Barely two years separated the onset of the Balkan Wars from the beginning of the Great War,[2] and there are similarities in journalistic reporting. A few months before the beginning of the First Balkan War, the press adopted a strong warmongering tone. The Ilustrovana Ratna Kronika (Illustrated War Chronicle) was founded for the sole purpose of avid warmongering and presenting the Serbian side of the war as both morally justified and victorious in advance, and was published only during the Balkan Wars, just as several publications later appeared only during the Great War.[3] A comparable perspective was seen in the reporting of the oldest Serbian daily, Politika, in which the Balkan Wars were defended, and the readership was called on to support the Serbian army. Other sides fighting against Turkey during the First Balkan War were largely ignored, or had their contributions diminished in the articles, while Turkey and Albania were presented in a highly negative fashion.

Dailies during the Great War↑

An almost identical modus operandi was seen at the onset of the Great War and throughout the conflict. The Ratni Dnevnik (War Diary) reported on “Serbian heroes” who had tackled forces greater than their own. It gave detailed reports on how many combatants either died or were captured on both warring sides, with clear moral support for Serbia’s military efforts; it was published only during the Great War. Some papers, such as the Beogradske Novine (Belgrade Newspaper) were founded by the occupation forces, coming out between 1915 and 1918 only, and presented a positive view of Austria-Hungary.

Srbobran (the Serb-defender) engaged in fervent praise of the Serb armies, especially after the retreat towards Corfu, belittling the enemy and offering a strong ethno-nationalist perspective. Enemy atrocities were reported on the front page, ending in “martyrdom” for the Serb and Allied combatants who perished. It is among the rare Serb newspapers published in New York, USA, until 1918. All of the above-mentioned periodicals supported government policies.

The most significant of dailies, Politika, regularly reported on the war. The opposing side was commonly represented as overly violent, oftentimes getting detailed listings of atrocities (Austrijska nasilja, Austrian violence). Local, Serb-nationalist points of view were presented[4] alongside inceptions of the Yugoslav idea, sometimes coming from international sources, such as Robert Seton-Watson’s (1879-1951) “Yugoslav (South-Slav) question” from January 1915, which ran on the first page.[5] It had been founded only a decade earlier by Vladislav Ribnikar (1871-1914), and continues to support government policies up to the present.

Not many magazines circulated during the Great War. The Ratni Zapisi (War Writings) was one of them, founded exclusively for the purposes of war propaganda, which included war poetry and colorful depictions of the “invasion of the barbarians in 1914,” “enlightened examples for honor and fatherland,” and the like. Non-genre-conforming publications could also be found, such as the Ratnik (The Warrior) – the “war calendar for the year 1915,” in which, in addition to a month-by-month calendar, patriotic poetry was presented, including family trees of the Serbian royal family, pan-Slavic ideology, as well as a day-by-day recapitulation of the war efforts.

The Serbian press, like both the Balkan and the wider European press, was characterized by a particularly strong bias towards its own side during the Great War. The vast majority of the printed press reported on the war, though with a clear ethical skew towards Serbia’s armies and victories, often engaging in ethno-nationalist discourse. Making sense of the war was primarily conducted by boasting the righteousness of the Serbian side, fighting against a stronger enemy, as well as by drawing on nationalist feelings. Contemporary scholarship has so far failed to tackle the Serbian press in the Great War period, with the exception of some minor works, most of them suffering from the same bias as their object of research a century ago.[6] 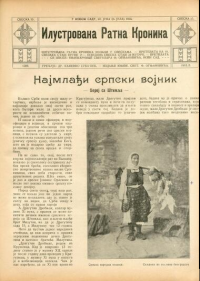