The Polish-Lithuanian border conflict (1914-1924) was a consequence of the processes of modernisation and the course of the First World War. Following the creation of the states of Lithuania and Poland after the war, the latent conflict between them became military and diplomatic. The strategic dividing line between them was the Nemunas River, while the main flashpoints were the regions of Suwałki, Vilnius, and Klaipėda.

The Manifesto issued by Nicholas Nikolaevich, Grand Duke of Russia (1856-1929) to the Polish nation on 14 August 1914, promised the reunion of the Polish lands under the aegis of the Russian tsar as well as autonomy to the Poles. This raised the question amongst Lithuanians: To whom will the Suwałki Governorate, Vilnius, and East Prussia at the lower reaches of the Nemunas River (which Russia planned to occupy) belong? On 17 August 1914 Lithuanian activists issued their declaration of loyalty to Russia, in which they expressed their hope regarding “the consolidation of Lithuanian lands.”[1]

Following Germany’s occupation of the western provinces of Russia in 1915, they combined the regions of Suwałki, Kaunas, and Vilnius in the period of 1916-1917 and enhanced the processes of Lithuanian political consolidation and separation from Poland. The Poles protested against these actions due to the Polish-Lithuanian Commonwealth tradition – when the Grand Duchy of Lithuania belonged to the Kingdom of Poland – and due to the fact that numerous Poles lived in Lithuania, especially in the Vilnius region. Lithuanians, seeking to counterbalance Polish domination, preferred the "self-determination" they enjoyed under the German protectorate.

The Formation of Opposing Military Forces in 1919↑

After the war, the German army began to retreat from Lithuania. On 19 April 1919 the Polish army occupied Vilnius and expanded further into Lithuania. The Supreme Council of the Entente approved the Foch Line of demarcation on 26 July 1919, which strengthened the position of Poland in the Suwałki region but presupposed condominium of Lithuania and Poland in Vilnius. Lithuania did not recognize the Foch Line in Suwałki because it separated Sejny and Puńsk from Lithuania; as a result, Poland did not adhere to the line in the Vilnius region.

On 8 December 1919, the Supreme Council of the Entente determined Poland's temporary eastern border. Called the Curzon Line, this new border coincided with the Foch Line from Prussia to the Nemunas and then continued southward. This decision was unacceptable to Poland, and for a long time Lithuania did not wish to recognize the border either.

At the end of April 1920 Poland launched a military campaign against Soviet Russia with the hope that they could take control of the former territories of the Grand Duchy of Lithuania. Lithuania, on the other hand, began peace negotiations with Soviet Russia, hoping to have its independence recognised in its ethnic territories. The Soviets linked this recognition with Lithuania's military action against Poland. Lithuania hesitated and attempted to remain formally neutral. With Poland losing the war with the Soviets, a compromise plan was accepted at the Spa conference on 9 July 1920. The agreement stipulated that Poland would withdraw to the west of the Curzon Line leaving Vilnius to Lithuania, and that the Red Army would stop fifty kilometres to the east of Vilnius. The peace treaty between the Russian Soviet Federative Socialist Republic (RSFSR) and Lithuania, signed on 12 July 1920, drew the border such that Vilnius, Lida, and Grodno were on the Lithuanian side but the Red Army gained the right to use Lithuanian territory. According to the Kaunas Convention of 6 August 1920, the Soviets left Vilnius to Lithuania, but retained the occupied Lida-Grodno region. Meanwhile, Lithuania occupied all of the territory of the Suwałki Governorate.

After the victory over the Red Army near Warsaw in August 1920, Polish troops moved closer to Lithuania again. Poland demanded that Lithuania withdraw its army from the Suwałki region to beyond the Foch Line. When Lithuania refused, there were clashes. According to the resolution of the League of Nations on 20 September 1920, Lithuania had to withdraw beyond the Curzon Line, while Poland had to "respect Lithuania's neutrality as much as it respects that of the RSFSR." [2] Using the resolution, Poland invaded the Grodno-Lida region.

Lithuanian-Polish negotiations took place from 29 September to 7 October 1920 in Suwałki; a demarcation line was drawn north of the Grodno-Lida region, but Poland did not agree that the line should reach the Lida-Vilnius highway. The course of the Suwałki negotiations depended directly on the Soviet-Polish negotiations taking place in Riga at that time

On 5 October 1920 the Polish-RSFSR border – separating Lithuania from Russia – was determined. This gave Poland the opportunity to increase pressure on Lithuania. On 9 October 1920 a separate military group that was affiliated to Poland and led by General Lucjan Żeligowski (1865–1947) occupied Vilnius, set up the government of so-called Central Lithuania, and marched towards Kaunas; eventually they were stopped by the Lithuanian army. On 29 November 1920, with the mediation of the League of Nations, a neutral zone was established, determining the status quo.

On 30 June 1922 the Conference of Ambassadors decided to grant Lithuania de jure status as long as it recognised the internationalisation of the Nemunas (according to Article 331 of the Peace Treaty of Versailles). Lithuania interpreted this condition as a demand to come to terms with Poland's expansion in the Vilnius region, and in response, suggested that the Conference of Ambassadors first determine Poland's legal eastern border (according to Article 87 of the Peace Treaty of Versailles). Additionally, Lithuania expressed its claims to the Klaipėda region (separated from Prussia accordance with Article 99 of the Peace Treaty of Versailles and temporarily administered by France). The Conference of Ambassadors, in a note dated 22 December 1922, informed Lithuania about that it would have de jure status, without comments regarding Lithuania's claims. At that time the Entente states were finishing their preparations to grant free-state (Freistaat) status to the Klaipėda region.

In an attempt to gain a port on the Baltic, and afraid that the Freistaat status of the Klaipėda region would strengthen Poland's policy of the "encirclement" of Lithuania (bearing in mind that Poland already possessed the Vilnius region), Lithuania occupied the Klaipėda region on 15 January 1923. Germany and Soviet Russia supported Lithuania politically. By demonstrating military might, the Entente states and Poland forced Lithuania to recognize the Entente’s right to decide the fate of the Klaipėda region. Consequently the Lithuanians’ fait accompli had transformed to a legal agreement between Lithuania and Entente. Eventually, Soviet Russia and Germany lost interest in supporting Lithuania; on 15 March 1923, the Conference of Ambassadors recognised Poland's eastern border, which would include the Vilnius region. The Ambassadors also demanded that Lithuania introduce wide autonomy in the Klaipėda region, granting Poland rights of transit and settlement there.

Only in spring 1924, with mediation by the Commission of the League of Nations, represented by the chairman Norman Davis (1878-1944), did Lithuania gain the juridical rights to Klaipėda and its territory. Poland's claims to Klaipėda, on the other hand, were suspended, given the suspension of Lithuania's claims to Vilnius. The question of transit along the Nemunas River was left open. Lithuania did not recognise the Ambassadors' decision about Poland's eastern border from 15 March 1923. The conflict became latent once again. 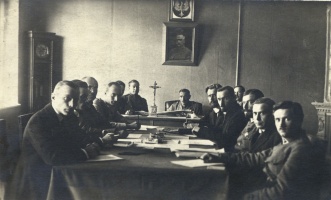