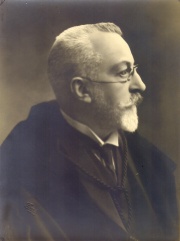 Accused of refusing to collaborate with the German authorities, the Belgian historian Henri Pirenne was deported to Germany in 1916. His captivity led him to reconsider his view on German historical scholarship and to propose a new methodology to fight against all parochialism: the comparative history method.

Henri Pirenne (1862-1935) was the most distinguished Belgian historian of his time. He was educated as a medievalist at the University of Liège and continued his studies at the Universities of Berlin and Leipzig, as well as at the Ecole des chartes in Paris, in 1884-1885. He published widely on urban development in the Low Countries, commercial relationships from the 8th to the 15th century, and Belgian history. The First World War had a strong impact on him as a father, a citizen and a scholar. From 1919 onwards, he was hailed as a hero in Belgium and took a leading role in the international scholarly community.

Pirenne, who was close to German historians, was very disappointed by the German invasion in August 1914 and by the October 1914 manifesto, Aufruf an die Kulturwelt!. The University of Ghent, where Pirenne held the chair of medieval and Belgian history, was closed in August 1914. In the context of the Flamenpolitik, the governor-general of Belgium, Moritz von Bissing (1844-1917), wanted to reopen it as a Flemish university in 1915. Most of the professors refused. The German authorities considered Pirenne and his colleague, Paul Fredericq (1850-1920), to be the leaders of the opposition.

In March 1916 both men were deported to Germany. Following his internment in the war camps of Krefeld and Holzminden, Pirenne was transferred for a few months to the university town of Jena, where he joined Fredericq. This improvement was due to international protests. Accused of conspiracy against Germany in their letters, Pirenne and Fredericq were sent in January 1917 to small towns. Pirenne stayed about one and a half years in Creuzburg an der Werra in Thuringia. He used the time to reflect on history and historical methodology and to write a history of Europe. As testified in Pirenne’s archives, he received many letters and packages of food and cigarettes from his family and colleagues. His case received continuing public attention, as evidenced by the book of the Danish philologist, Kristoffer Nyrop (1858-1931), published in English, French and German: The imprisonment of the Ghent professors, a question of might and right; my reply to the German legation in Stockholm (1917).

The War’s Impact on Pirenne’s Scholarship↑

After Pirenne’s return from captivity, he was honored all over the western world. Such recognition as an important figure of the intellectual resistance, in addition to his reputation as a historian, endowed Pirenne with many official responsibilities. Among others, he served as the Belgian president of the Carnegie Endowment for International Peace (1919-1924) and president of the Union académique internationale (1919-1923).

Based upon the diary he kept throughout the war,[1] Pirenne published an article on his war experiences entitled Souvenirs de captivité en Allemagne (mars 1916-novembre 1918) in the Revue des Deux Mondes (1919/1920) describing his arrest and experience as a prisoner, as well as his observations and thoughts on the Germans. On a scientific level, the war’s origins and consequences occupied Pirenne during the 1920s. One of his concerns was to preserve all kind of sources related to this turmoil. He established the Commission des Archives de la guerre (1920-1928), responsible for their collection and inventory. At the request of the Carnegie Endowment for International Peace, Pirenne wrote a historical study on Belgium between 1914-1918, entitled La Belgique et la Guerre mondiale (1928).

In the war’s aftermath, Pirenne’s speeches reflected a profound change of opinion on Germany, mainly expressed in his discourses as rector of the University of Ghent (1919-1921). He criticized the German historians’ nationalistic attitude based upon racist prejudices and their insistence on the German culture’s superiority. He ascribed their narrow-mindedness to their overspecialization and lack of critical thinking.

Most importantly, the war led Pirenne to revise his historical methodology. In his opening discourse at the 5th International Congress of the Historical Sciences (De la Méthode comparative en histoire) in Brussels in 1923, Pirenne expressed his opinion that historiography had contributed to the war’s outbreak by spreading nationalism and racism. In order to avoid such trends in historical research, he invited all scholars to use comparisons in writing national history. The defense of the comparative history was Pirenne’s new warhorse in the historians’ scholarly community.