War, massacres, displacement, famine and economic crisis left over 100,000 children orphaned across the Ottoman Empire during WWI. Though most orphans were left to fend for themselves, as their numbers swelled, state and charitable groups began to set up orphanages, many of which were absorbed by Near East Relief after the war.

The vast majority of orphaned children during the war were homeless, many of whom were exploited as laborers or pressed into gangs of beggars. In this context, the term “orphans” included children placed in orphanages by the state or their family, homeless children without apparent parents or guardians, Armenian, Kurdish and Turkish children from Anatolia orphaned by fighting, massacres, or deportations and local children orphaned by poverty, famine or disease.

The orphans ranged in age from infants to seventeen years, with the majority falling between the age of ten and thirteen.[1] There is no way of accurately fixing the number of children orphaned by the war in the Ottoman Empire and Middle East, but estimates range from the absurdly inflated 713,000[2] to the more reasonable 100,000-150,000.[3] Most were Armenian refugees who had been expelled into inland Syria and Anatolia in 1915 but the numbers also included the thousands of Turkish and Kurdish orphans from war and massacres by paramilitary groups in eastern Anatolia and the famine that affected regions across the Ottoman Empire. Since those who died on the streets were not well cataloged and only a fraction of the total number of orphans was absorbed into shelters, the numbers remain vague.

All of the roughly 100 orphanages existing in 1914 were privately run by missionaries, monastic societies and charities. As the number of affected children increased following the massacres and expulsion of the Armenians in 1915, additional attention was drawn to the pressing need for aid for the children who had been affected by the genocide. The organization that played the biggest role in addressing the growing orphan crisis was the American Committee on Armenian Relief, which later became the Near East Relief. It and related Presbyterian organizations supported orphanages in Mardin, Urfa, Diyar Bakir, Mara’ash, ‘Aintab, Aleppo, Homs, Zahle, Tripoli, Dayr al-Qamar, Shimlan, ‘Ain ‘Ainub, Shweifat, Ghazir, Sidon, Antelias, Jbeil and Jerusalem. They were also tied to work done by Beirut’s Syrian Protestant College (SPC), whose dentist, Arthur Dray (1875-1926), ran soup kitchens and hospices in Brummana. The high cost of food meant the per-capita cost of maintaining one orphan a month was an astounding 713 piasters ($12-13) even after the war. The Presbyterian orphanages received $6.2 million in funding during the war from Near East Relief.

Table 1: Orphanages under the Supervision of Near East Relief, 1920 Figures[4]

Smaller operations were conducted by local Syrian churches and charitable institutions, such as the Sisters of Charity who operated orphanages in Beirut. The Maronite church was able to provide assistance to its community in spite of limited funding. In one instance, Bishop ‘Awad of Tripoli, sold the church’s bell and silver to buy food for children. In Damascus, the Greek Orthodox Patriarch Gregorios Haddad (1859-1928) ran a shelter for both Christian and Muslim children which received support from Ahmet Cemal Pasha (1872-1922).

Private organizations offered support as well. When high prices and displacement from the Russian war created an orphan problem in Istanbul, the Masonic lodges organized the “Society for the Protection of Children,” which ran a 130 bed shelter, petitioned to outlaw the employment of child beggars and promoted nutrition, hygiene and education.

Often such private efforts collaborated with the state. In 1917, Cemal Pasha and Mehmet Cemal Azmi Bey (1868-1922), the Wali of Beirut enlisted wealthy women from Beirut’s Muslim and Christian elites to run orphanages and workhouses to assist those children orphaned by the intense famine in the mountains and city. This project slightly increased the shelter capacity but Bayard Dodge (1888-1972) of the Syrian Protestant College noted that the quality of the shelters decreased significantly over time.[5]

The Ottoman State and Orphans↑

Prior to the war, there were no state shelters for Turkish children. To cope with refugees from the Russian front, eighty shelters were opened during the war (later reduced to sixty-five) for Muslims, capable of housing roughly 11,000 children. These were funded by levies on tobacco and other luxuries and placed under the “General Directorate of Orphanages” which oversaw the welfare, education and training of its charges. An additional 20,000 were under the care of the Board of Migration. Outside of a select few who received training as artisans, most of these orphans received little or poor care.[6] Many Armenian orphans were also given Muslim names and adopted by Turkish families. The state compensated the adoptive parents through cash stipends and the rights to the properties that had been owned by the parents of the orphaned children.

In Syria, Cemal Pasha sponsored and supplied a variety of orphanages for both Anatolian and local children. Those receiving his patronage included the Armenian Shiradjian (alt. Altounian) shelter in Aleppo, the Brummana shelter in Lebanon and Patriarch Haddad’s work in Damascus. He also enlisted famed Turkish feminist Halidé Edib (1884-1964) to reform and run the mixed Muslim shelter in ‘Aintoura, which served primarily Kurdish and Turkish children, but also controversially included many Armenian orphans who were forbidden the use of their own language or names. Though the Armenians were first directed to Armenian or Presbyterian shelters, crowding and homelessness often forced them into state orphanages, where they were converted to Islam, renamed and forbidden to speak Armenian.

‘Azmi Bey, ‘Ali Munif Bey (1874-1951) and later Isma’il Hakki Bey (?-1936) of Beirut and Mount Lebanon funded similar relief operations in their own districts, generally under the oversight of local notables like Umar al-Da’uq (1874-1949) or monastic orders like the Catholic Sisters of the Sacred Heart or Sisters of Perpetual Adoration. However, the establishment of orphanages was entirely at the discretion of the local leadership. As an administrator in the Lebanese district of Koura, Yusuf al-Hakim (1879-1969) set up a number of orphanages that were quickly overwhelmed by the demand, forcing Hakim to appeal for additional funding from Hakki Bey.

The best orphanages had the advantage of consistent provisioning, firm and committed leadership and a degree of self-sufficiency. Many of these trained the children in a trade and thereby supplied the orphanage and children with necessary textiles, beds and even shoes.

However, many institutions were squalid, poorly run and unhealthful. Crowding, vermin, poor hygiene, neglect and inadequate diet promoted typhus, trachoma, tuberculosis, scabies and diseases of the mouth (possibly a reference to measles, which causes small lesions in the inside of the cheeks known as Koplik’s spots). Corruption and embezzlement were persistent issues and the frequently lax control by the administrators made orphanages dangerous environments, particularly for young children who could not defend themselves or their food.

Even in the better shelters, the psychological health of the orphans was frequently poor. The emotional trauma that many had experienced watching their families killed or slowly wasting away from starvation was aggravated by the mental fog of hunger, chronic disease and the often joyless shelters. Reports often noted the absence of laughter, play or normal social interaction among the children or a delay in normal emotional responses.

The end of the war did not end the problems for either the orphans or those who were tasked with caring for them. As the Ottoman Army retreated into Anatolia in 1918, the Turks running state shelters in Syria fled with it, leaving the charges of the state institutions in the care of Near East Relief or local leaders.

Most local orphans were eventually reunited with family members after the war and a large number were taken by the Sisters of Charity and other Catholic monastic orders. Some Armenian orphans were likewise reunited with family members or even their own parents, sometimes years after the conclusion of the war. However, the ongoing care for the tens of thousands of displaced Armenian orphans in Syria following the war presented a long term problem that was only resolved over time as the children grew old enough to leave the shelters. Near East Relief officially shuttered its operations in the region in 1930. 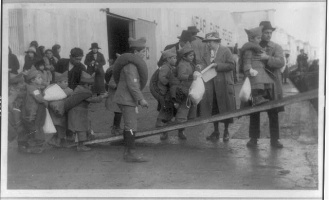 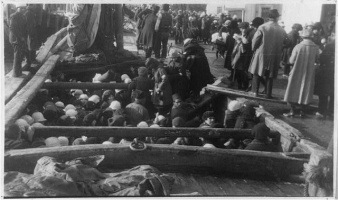