The World War One years are often treated as a blank spot in the musical history of the Ottoman Empire, Middle East and North Africa – a temporary obstacle in the path of the phonographic revolution introduced at the turn of the century and that would come to full flower during the interwar period. Yet on closer inspection, music was an important medium of lament, celebration and critique for both soldiers and civilians living under the rule of competing empires. In addition, the turbulent aftermath of the war had lasting effects on musical life in the Ottoman Empire, Middle East and North Africa.

World War One fell within a period that is often treated as one of momentous musical change in the Middle East. In the Arabic-speaking lands and in the Ottoman center, the first decade of the 20th century had seen the rise of a variety of musical revival and reform movements, new genres and venues, and, as in the rest of the world, the novel possibilities that the phonograph presented to musicians and listeners alike.[1] In addition, the interwar period is frequently treated as a golden age of musical activity in the new Republic of Turkey, Iraq, post-1919 Revolution Egypt, Tunisia, Algeria and beyond, fueled by radio, the film and recording industries, the landmark Cairo Conference of Arab Music of 1932 and the new political orders that followed the war.[2]

The specific period of 1914-1918, on the other hand, has been something of a blank in the musical history of the Middle East. In certain respects, World War One is a convenient temporal landmark in narrating the history of Middle Eastern musical life, serving as a way to differentiate between the well-bounded interwar period and its turn-of-the-century predecessor. The degree to which the war years made a difference for musical life, on the other hand, is an open question. In some instances, such as in the biography of the Egyptian musician Sayyid Darwish (1892-1923), the war years do not figure as particularly dramatic.[3] In other cases, however, the circumstances of the war years clearly affected musical life. Military bands were a ubiquitous fixture for the Ottomans and their allies, as well as for their British and French opponents. For non-military musical life, as well, the upheavals of the war could have had palpable effects. In Cairo, for example, the war meant a disruption of foreign record companies and a resulting boost to local entrepreneurs.[4] And in the Ottoman center, the massive dislocations and violence of the war years led to the exodus of many of the Greek and Armenian musicians who had up until then played such an important role in urban Ottoman music.[5]

While these effects of the war highlight the embedding of music within the sociopolitical and economic order, music clearly was important in the wartime realm of affect as well. In the world of non-professional music-making, firsthand accounts unsurprisingly speak to the value of old repertoire as a balm for homesick soldiers and diplomats alike.[6] Yet other sources suggest that musicians and listeners turned to song to subversively comment upon the war, by way of both lament and satire. In the Ottoman heartland, numerous Turkish and, in some cases, Kurdish songs arose concerning the experience of the war, including laments of the loss of life in the Dardanelles, Yemen and other parts of the Empire. The Dardanelles or Gallipoli Campaign, known in Turkish as the Battle of Çanakkale (after a port city at the southern end of the strait), gave rise to a powerful sung lament for the lost lives of young soldiers, “some engaged, some married,” smashed like “broken jugs” in the bruising fight against the Allied invasion attempt.[7] In a similar vein, multiple songs mourn the loss of young soldiers in Yemen. One lament sings specifically of the death of soldiers from the eastern city of Muș, seen from the perspective of young women left behind, while another speaks from the perspective of the parent of a dead soldier, or from the perspective of the soldier himself, blaming the “ruthless pasha” in Yemen for the suffering of the soldier’s orphans.[8]

In the case of Palestine, much of our knowledge of the everyday life of the war years comes through a musical prism thanks to the valuable memoirs of the composer and performer Wasif Jawhariyyeh (1897-1973).[9] Jawhariyyeh’s accounts of music-making in 1914-1918 stress satire over lament: his song “Stuffed Tripe” injected biting humor into the deadly serious problem of food shortages in the last years of Ottoman rule. In a lighthearted counterpart to the devastating poems chronicling the parallel (and far more severe) famine in Beirut, Jawhariyyeh lovingly describes the specialties of Jerusalem that were no longer available, starting with stuffed tripe (karshāt) and moving all the way to kunāfa (cheese pastry), pistachios, and nārgīla (water pipe). Interestingly enough, Jawhariyyeh first performed this song before the local Ottoman authorities whose policies were helping to drive the food shortage in the first place.[10]

The Algerian “Hadj Guillaume” is arguably the best-documented musical phenomenon directly arising from the war experience in the Middle East and North Africa, and represents an explosive mix of celebration, satire and lament. Named for Wilhelm II, German Emperor (1859-1941) - Guillaume in French, with the Islamic title of ḥājj as a prefix - “Hadj Guillaume” is not so much a song as a whole genre of colloquial Arabic (and sometimes Kabyle Berber) verses, peppered with French, which were spontaneously created by working-class Algerians in response to their enlistment into the French war effort. Some versions express a frankly pro-German, anti-French sentiment, as in the lines, “O French! What are you thinking? Algeria is not yours./The Germans are coming to take it from you, things will return to the way they once were./Ay ay, what can we do to him? Hadj Guillaume’s star is rising!”

Other versions reverse the sentiment, as in: "O Germans, get a hold of yourselves! The Alsace is not yours./Watch out that you do not lose your riches, and that we don’t wind up with Berlin!/Ay ay, what can we do to him? Hadj Guillaume will lose his head." Many versions, however, give voice to subtle critiques: the recruits’ experience of leaving “pregnant wives,” being “packed in like dried figs” and counted “like sheep,” drinking “coffee without sugar” and, in the Dardanelles, being “exterminated with bullets and cannonballs.” Several versions end with a statement of refusal in the face of hardship: “Ay ay! What can we do against him? I will not go to the Dardanelles!” The form could also take on the voice of parents and lovers left behind, as in, “My son was in the trenches, a rifle in his hand/When a bullet struck him in the head, and sent his blood flowing in streams./Ay ay, what can we do to him? Hadj Guillaume’s star is rising!”[11]

These examples of sung lament and satire suggest that music was indeed an important medium for sociopolitical commentary during the war years. But if we allow ourselves to view the political unrest of the post-Armistice period as a continuation of the war, then we might be able to connect 1914-1918 to the interwar period in a much more fluid manner. The Greek-speaking Christian musicians who had been such important fixtures of urban Ottoman music brought their old genre specialties with them in their exodus from what became the Republic of Turkey.[12] Egypt’s revolution of 1919, a collective demand for independence from Britain, gave rise to rich musical production, particularly through the work of Sayyid Darwish. His 1920 song “Salma yā salāma,” with words by Badi’ Khayri (1893-1966), directly invokes the war experience, including the 1919 revolution, with its line, “We’ve seen war and we’ve seen blows/And we’ve seen dynamite with our own eyes.”[13]

In the fluid political situation of this period, musical meanings could often shift in the eye (or ear) of the beholder. For example, Ibrahim Qabbani’s (1852?-1927?) “The heart was created for your love,” written for Fuad I, King of Egypt (1868-1936), came to be redirected toward Ataturk, at least in the view of Palestinians and Syrians disgusted with Allied rule and newly sympathetic to the Ottoman state’s republican successors. Palestinians also continued to sing Jawhariyyeh’s “Stuffed Tripe” well after the British had replaced the Ottomans and the food shortages had passed.[14] Algerians, still far from fully enfranchised despite their considerable sacrifices during the war, moved on to other experiments in sung critique, yet “Hadj Guillaume” haunted at least one colonial figure, thanks to whom we can speak of this phenomenon in the first place: the Arabist Joseph Desparmet (1863-1942), whose 1932 study offered a picture of the indigenous “collective soul” of an earlier era while no doubt also commenting on the current climate of a society that had been thoroughly politicized by the war experience.[15]

Musical memories and traces of the war era have reached to more recent times as well. While Darwish’s “Sālma yā salāma” was thoroughly depoliticized in Yolanda Gigliotti’s (1933-1987), known as Dalida's, 1977 pop remix, his “Bilādī,” composed in honor of 1919, has been Egypt’s national anthem since 1979. Musicians and listeners have conserved and even cultivated some songs’ links to World War One, as in the case of the popular Palestinian folk song “Al-‘ūf mash‘al,” which is sometimes said to tell of a young man resisting the Ottoman draft. And in Turkey, several of the World War One-era laments enjoy widespread popularity. One of them, “Çanakkale türküsü,” gained new life as an anti-war anthem among young leftists in Turkey during the 1990s. Music, then, not only commented on the war experience of 1914-1918, but in some instances is also a powerful way to both remember this era and assert its relevance to the present.

Musically speaking, the World War One years were not simply a temporary obstacle in the path of the turn-of-the-century technological revolution that would come to full flower during the interwar period, and which settled on Egypt as its epicenter in the Arabic-speaking lands. Rather, music was an important medium of lament and critique for both soldiers and civilians living under the rule of competing empires in 1914-1918. In addition, the turbulent aftermath of the war had lasting effects on musical life in the Middle East and North Africa, and in some instances led to forms of musical production that sustained the laments and critiques of the war years in a new era.

Jonathan Glasser, The College of William and Mary 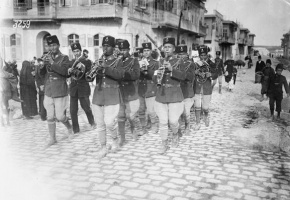 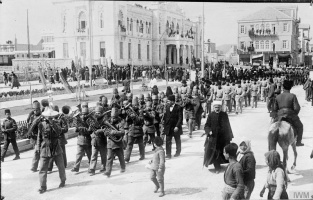 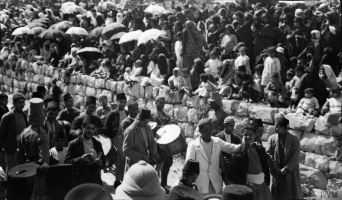 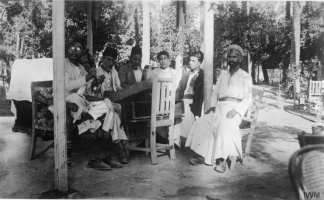 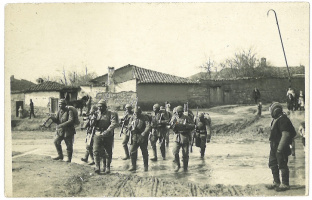