During the Great War, the Ottoman state mobilized its citizens under two war policies, soldiering and provisioning, which led to a disastrous outcome. A “tacit” contract was developed between soldiers and the state, which legitimized, for the former, the continuation of their mobilization or their demobilization through desertion.

During the Second Constitutional Period (1908-1918), the July and October 1909 recruitment legislation made military service obligatory for all Ottoman citizens and abolished local and religious exceptions. While most Muslims had already been drafted, among those who were previously exempted for religious reasons, either as Muslim religious students or non-Muslims, the draft was quite unpopular. Young men and their families answered the draft by falsifying records, bribing officials, or migrating abroad.

The Balkan Wars (1912-13) were the testing ground for the new conscript army and society as a whole. While the latter demonstrated its support for the state and even participated actively in the war, the army witnessed a military catastrophe. Both the mobilization and the over-optimistic planning of the General Staff failed miserably. The unexpected military defeat caused many among the elite to be concerned that another disaster would mean the end of the empire. They began advocating for the militarization and permanent mobilization of society, with all sexes and ages assigned active roles for the future defense of the state. Non-Muslim soldiers also became a matter of discussion among the ruling elites. Supporters of Ottomanism focused on non-Muslim soldiers’ bravery, while its opponents pointed to the high number of desertions, attributing them mainly to non-Muslims. As the latter group’s ideas became increasingly popular, the leadership of the Committee of Union and Progress (CUP) chose to advocate for a new unifying Turkish or pan-Turkish message, and in this way, it denounced both the non-Muslims and civic Ottomanism. Recent demographic changes reinforced such a discourse, as most majority-minority provinces had been lost, while the Muslim population increased with the arrival of Balkan Muslim refugees.

The above culminated in the Ottoman government’s aspiration to avoid the Balkan Wars’ mistakes and inadequacies by implementing a series of reforms. It issued the “General Organization of the Military” of 1913, which abolished the reserve unit system and replaced national with regional conscription as a way to allow the army corps to draft men from their regions, and in this way free conscription from the empire’s insufficient infrastructure which caused delays. This led to the formation of “ethnic” units, such as the “Arab Regiments.” The government also issued the “Temporary Law for Military Service” of 12 May 1914 which aimed to make recruitment more efficient and training more thorough. It divided service between “armed” and “unarmed,” increased the number of middle- and low-ranking officers, allowed higher education graduates to be trained as reserve officers, enabled the recruitment of petty criminals and volunteers, and abolished the remaining exemptions save the ones for settled nomads.

The Ottoman Empire declared a general mobilization on 3 August 1914 for those between the ages of twenty and forty-five and announced harsh punishments for draft-evaders. As there was no declaration of war, the mobilization aimed to offer the military authorities valuable time to gather and train conscripts. Nevertheless, draft evasion was still common. Mobilization in Western and Central Anatolia faced less resistance than in Eastern Anatolia and the Mesopotamian provinces, while in Yemen and Hijaz anti-draft resistance was widespread. On 14 November 1914, the empire declared a jihad against the Entente as a way to mobilize Muslims worldwide by instrumentalizing religion. The CUP government deliberately presented the war as a defensive one, which meant that each Muslim needed to defend the Islamic state. The decision to declare a “holy war” succeeded in galvanizing the troops and in justifying conscription.

Ottoman authorities also summoned intellectuals to produce literary propaganda as a way to boost the morale of their compatriots and help with the war effort. However, their division between four ideologies – Ottomanism, Islamism, Westernism, and Turkism – led to contradictory messages. Simultaneously, visual and architectural propaganda were also deployed. However, as the majority of the public was illiterate and unfamiliar with such propaganda, administrative, military, and religious officials used oral propaganda at public readings, meetings, sermons, and memorial services to propagate the official message. Criers, imams, and literate citizens communicated the messages of pamphlets, newspapers, and posters to their illiterate compatriots. Even rumors and folk songs were utilized to support the mobilization.

During the war, the age limits for service were changed to mobilize more men. The minimum age dropped to eighteen on 29 April 1915 and the maximum was increased to fifty on 20 March 1916, while military service was extended indeterminably. In total, the Ottoman Armed Forces by the end of the war had drafted a little less than 3 million men and around 100,000 volunteers out of a population of 23 million.

The CUP government introduced two war policies related to soldiering and provisioning which established a new and unprecedented relationship between the state and the people. However, these two policies contradicted each other, as soldiering required a mobilization that undermined the state’s ability to provide the necessary workforce. The empire’s infrastructural deficiencies and shortage in imports meant a heavier reliance on its own human and material resources. This had a disastrous effect on productivity and the economy, which led to famine in some parts of the empire, especially in Greater Syria, by the second year of the Great War. On the ground, this meant that to achieve its mobilization goals, the state expanded its presence into local communities, seeking to enlist as many as it could. It even drafted sole breadwinners, causing many families to struggle for survival and forcing women, the elderly, and youths to replace able-bodied men as the main workforce. For minorities, it also meant their deportation, the confiscation of their property, and the eradication of their cultural presence. For most Ottoman citizens mobilization became synonymous with catastrophe.

Nevertheless, the new relationship between the state and society was ambiguous and offered people on the ground ways to negotiate, avoid, resist, or even manipulate the authorities. Local headmen were responsible for recording and gathering the conscripts and the youngsters who had to be recruited through organizations such as the Youth League. However, in many cases, local communities and headmen chose to support their fellow citizens and help them evade the draft. Often, conscripts departed during the night as a way to avoid local anti-draft resistance initiated by women.

For those drafted and their families, a tacit contract with the state was developed that increased their social status, extended state protection through allowances offered to conscripts’ families, and acknowledged that the state’s military demands would not increase. However, any deviation from the tacit contract caused massive numbers of deserters who did not want to withstand with the continuation of the war, poor conditions, bad treatment, and loss of hope. The empire’s poor infrastructure meant that the conscripts had to walk, in some cases, thousands of kilometers to the front without proper clothing, shoes, and surveillance. This allowed many to witness the atrocities of the war. Burned villages, displaced elders, abused women, and orphaned children begging for food raised their concerns about their own families back home. In many cases, soldiers mistreated villagers, confiscating or stealing food, driven by hunger. More crucially, famine, mistreatment, and, especially, the abuse and rape of women jeopardized soldiers’ sense of masculinity. By deserting, they abandoned their role as protector of the nation to regain that of protector of their families.

Although the state declared draft evasion and desertion punishable by death and announced that draft evaders and deserters’ families would be deported, by the end of the war, military fugitives were estimated at 500,000. Many of them formed armed bands and pillaged the countryside. Soon, mobilization had been transformed into a bounty hunt and the home front into another battleground as gendarmes were pursuing and fighting bands of fugitives. This restructured the internal security mechanism that assisted the 1919-22 remobilization and the Turkish nation-building process.

Volunteerism offered a solution to mobilization’s limitations and shortages. In its attempt to militarize and mobilize as many men as possible, the state also relied on prisoners, immigrants and refugees, tribesmen, and religious believers who voluntarily offered their skills in exchange for material gains or political support. These volunteers constituted the state’s most loyal collaborators in its demographic engineering policies during the war.

Eventually, Ottoman mobilization during the Great War facilitated the ethno-religious homogenization of Anatolia, the main victims of which were religious minorities. Authorities had restricted the tacit contract to Anatolian Muslims, and to a lesser degree to Muslim refugees, as they distrusted the rest. While several non-Muslims received arms, especially during the early stages of the war, most were disarmed between 1915 and 1916. The majority of those assigned to unarmed services were detached to labor battalions, as were some Muslims, while a minority, such as doctors, craftsmen, or people with a good command of the Ottoman language, avoided such a fate because they were regarded as skilled labor. The latter group stood more of a chance to survive the war, while many soldiers in the labor battalions were executed or died from disease, exhaustion, and starvation.

Charalampos Minasidis, The University of Texas at Austin 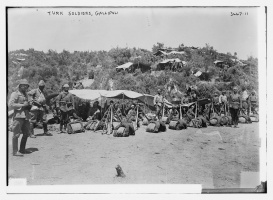 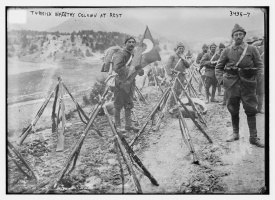