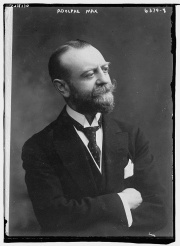 Adolphe Max, the mayor of Brussels, was known for his peaceful resistance against the Germans and his resulting jail-time. He was considered by the Belgian public as a hero of the Great War.

A jurist by training, Adolphe Max (1869-1939) was initially a lawyer and a journalist. He was elected to the City Council of Brussels in 1903, became deputy mayor in 1908, and then held the mayoralty from 1909 until his death. Max also sat on the provincial Council of Brabant from 1896 to 1911 and became a member of the Congo High Council.

The First World War defined Max's reputation as a hero. On 20 August, German troops entered Brussels with an impressive show of force. A day earlier, Max had ordered the filling of trenches dug during the opening days of the war, the removal of the civic guard, and the demolition of barricades, to avoid clashes between German troops and civilians. The mayor greeted the German authorities — while refusing to shake hands with them — and even pledged to ensure the security of the troops billeted in the capital. Without delay, posters were put up throughout the city, calling on the population to obey the occupying authorities who commandeered everything they needed, including food and housing.

Even though the mayor had adopted this conciliatory policy, he fought continuously to limit the demands of the occupants until his arrest on 26 September 1914. For instance, Max combated the abusive requisitions of food: as early as 24 August, he negotiated an agreement stipulating that requisitions were to be made only in the case of payment within eight days. The Germans failed to abide by this agreement, leading to a true struggle with the mayor; when they chose to suspend the payment of requisition vouchers, Max decided in turn to suspend the payment of war contributions (Brussels had already paid 15.6 million Belgian francs out of 20 million Belgian francs claimed by the Germans). Under this pretext, the Germans arrested and subsequently deported Adolphe Max to Germany.

Max was first sent to the fort of Glatz in the Vosges where he was put into solitary confinement for a year. Later, he was transferred to the castle of Celle in Lower Saxony. The Celle incarceration was milder but repeated breaches of regulations earned him a few days more of solitary confinement. He stayed in a Berlin military prison for a few weeks prior to his return to Celle, where he stayed until 30 October 1918. He was then transferred to Goslar, also in Lower Saxony, which he left without authorization on 13 November 1918, two days after the armistice.

During his deportation, Max was replaced by the deputy burgomaster, Maurice Lemonnier (1860–1930), who headed the Brussels Council until his arrest in 1917. Subsequently the council was headed by another deputy burgomaster, Louis Steens (1849–1933). On 17 November 1918 the inhabitants of Brussels offered a triumphant welcome to Adolphe Max, who had finally returned after four years of imprisonment. A few days later, he was appointed minister of state. Re-elected year after year since 1909, he remained the mayor of Brussels for thirty years. An ardent supporter of communal rights, anti-Flemish, and anticlerical, he participated actively in the constitutional reform of 1919. Throughout his tenure he maintained a policy that favored communal schools. Moreover, he was a member of the Royal Academy of Belgium and the Institut de France. He also created the Palais des Beaux Arts. Extremely popular until the end of his life, Adolphe Max was given a solemn funeral in 1939.