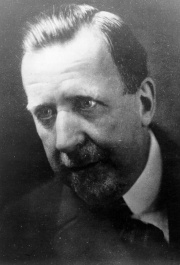 As an early critic of the social and political conditions of the Wilheminian society, Heinrich Mann was one of the few German authors who opposed the First World War from the beginning. The first part of his topical novel Der Untertan reveal the socio-psychological mechanisms of an authoritarian society that glorifies power and prestige and despises the lower classes. Other works by Heinrich Mann show his commitment to democracy and to the active role of the writer and intellectual. During the war, the rift between Mann and his brother, Thomas Mann, who took a different political view, widened considerably.

While the vast, overwhelming majority of literary authors in Germany and Austria reacted enthusiastically to the outbreak of World War I, a small minority opposed the war. Some examples include the pacifist literary magazine Forum, edited by Wilhelm Herzog (1884-1960), and the anti-war proclamation published on 1 August in Franz Pfemfert’s (1879-1954) Die Aktion. Heinrich Mann (1871-1950) belonged to a group of writers who – alongside Johannes R. Becher (1891-1958), Annette Kolb (1870-1967) and Franz Werfel (1890-1945) – opposed the war from its outset.

Mann’s position was primarily based on a fundamental analysis of the Wilheminian society, which he undertook in his satirical novel Der Untertan (“The Subject” or, more appropriately, “The Patriot”). This novel showed the untenable nature of social antagonisms in Germany, and also demonstrated how inevitable a devastating European war had become. The novel began to appear in a serialized form at the beginning of 1914. In early August, the serial was terminated. The completed novel was published in a Russian translation in 1915. The original German version was published at the end of the war, in November 1918.

Mann’s Der Untertan is a topical novel (“Zeitroman”), a genre which was relatively innovative in the context of Germany, where the developmental novel was the dominant form. It describes the career of a middle class (bourgeois) paper mill entrepreneur during the 1890s, and focuses on social interactions, especially the relationship between workers and unions on the one hand, and on the other, to the traditional aristocracy that continued to hold most positions of leadership in the army and the administration.

Diederich Heßling, the main character, is presented as a “social type” or “social character”, and satirical means are used to highlight the problematic and contradictory traits of his personality. In many ways, Mann’s analytic narrative procedure is similar to the socio-psychological studies of the Frankfurt School, which between 1933 and 1945 tried to explain the roots and psychological mechanisms of the “Authoritarian Personality”. Mann refers to fundamental influences in childhood and adolescence and to social institutions such as family, school, church, the army and fraternities. He argues that a type of social (and political) behavior oriented towards power is actually rooted in psycho-social weakness.

From the beginning, Diederich is portrayed as “weak”. As a university student coming from a small provincial city, he is scared by the anonymity of Berlin, and he is equally afraid of women, relationships, and emotions. His orientation towards power is a form of over-compensation in this difficult time of adjustment. However, Mann goes beyond individual psychology. Generally, Heßling stands for the precarious role of the German entrepreneurial (or bourgeois) middle class, that had to adjust to the conditions of modern capitalism after 1848 (and even more so, after 1873), and deal with the political conditions of monarchy and aristocratic dominance. The option Heßling (and most of his fellow middle class capitalists) choose, is to enhance their careers by opportunistically arranging themselves with the traditional elites, and thus hoping to share in their power. This is what explains their increasingly nationalistic attitudes and the growing class antagonisms of the Wilheminian society.

It is this class arrangement, with its accompanying hypocrisy and corruption, that leads to untenable social conditions – which literally cry out for a satirical critique. The so-called “national cause” promoted by the social elites, plays an increasingly dominant role as well. At the end, the novel describes the protracted tactical maneuvers surrounding the erection of a national monument in honor of the Kaiser (instead of investing the money into a home for children) until a storm of apocalyptic dimensions disrupts the festive ceremony and Heßling’s speech, and sweeps away the whole chauvinistic society – a warning and a premonition of the outbreak of a catastrophic world war.

Position on the First World War↑

Throughout the war, Heinrich Mann held on to his anti-war position while pro-war sentiments and statements prevailed and anti-militaristic protest was banned or censured. In a note written in 1915 (and published only in 1971), Heinrich Mann refers once again to his novel, apologizing to his main hero for underestimating him. While he, the author, “took him very seriously”, he did not expect to witness “the last consequence of his existence, the war against Europe.”[1]

In the same year, 1915, Mann published a long essay devoted to the French author Emile Zola (1840-1902), in order to document how his own literary career had changed from its beginnings in the 1890s. After 1871, Zola had taken an increasingly critical stance against the French monarchy (and monarchy in general) and had become an advocate of democracy and democratic values. As Mann points out, this led to a changed role for the writer and the literary intellectual, for it was now up to the writer to play a leading role in the fight for a future democracy. Thus “Geist” (“mind”) becomes “Tat” (“action”) fulfilling a most noble function of literature under modern conditions – Zola himself had demonstrated this in his successful intervention in the famous Dreyfus case.

In 1917, Mann also published a sequel to Der Untertan, called Die Armen (The Poor), set in the years 1913 and 1914. In this novel, Heßling has become an all-powerful industrialist and ruthless exploiter, and the opposition, consisting of representatives of the mainstream Social Democratic Party (SPD), has given in to the overall trend of corruption and egotistical careerism. In the end, during the first days of August 1914, their main representative signs up as a volunteer.

Heinrich Mann’s prophetic novel Der Untertan was published in its entirety in November of 1918. Although it was published late, or even too late, the text had a long lasting influence on historical, political and literary discussions in Germany well into the 1920s, after 1945, and even into the 1980s and beyond. The novel became an immediate bestseller because of his portrayal of the deceased Kaiserreich and its social impact contained valuable insights, and his prediction of a great catastrophic war had proven accurate. However, conservative critics did not share in the general applause after 1918. They labeled the book as unpatriotic and even called it a literary “Dolchstoß” (a stab in the back), alluding to the infamous “Dolchstoßlegende”, as it was propagated by Erich Ludendorff (1865-1937) and Paul von Hindenburg (1847-1934) in order to blame anti-war activists for Germany’s defeat. 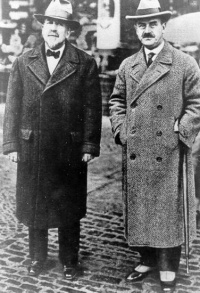