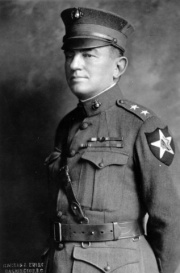 Major General John Archer Lejeune was the 13th Commandant of the Marine Corps. During World War I, he was initially assigned to command the 4th Brigade (Marines) of the US Army 2nd Infantry Division. Upon transfer of the division’s commanding general, Brigadier General James Harbord, US Army, Lejeune assumed command of the division. He took over the leadership on 28 July 1918 and remained in that capacity until August 1919.

John Archer Lejeune (1867-1942) grew up in Louisiana. His father, Ovide Lejeune (1820-1889), owned a sugar plantation in Pointe Coupee Parish, which had fallen on hard times following the Civil War. To find affordable higher education for his son, Ovide urged him to seek an appointment to a national military academy. After studying at Louisiana State University for three years, Lejeune secured an appointment to the US Naval Academy and attended from 1884 to 1888. Due to a lack of vacancies in the US Navy officer ranks Lejeune was, following graduation, immediately sent on a two-year cruise at the rank of “passed midshipman.” Afterwards, Lejeune was commissioned a second lieutenant in the US Marine Corps, on 1 July 1890. His first duty assignment was at Marine Barracks, New York.

During the Spanish-American War, First Lieutenant Lejeune commanded the marine detachment aboard the USS Cincinnati. On 9 August 1898, Lejeune led a landing party of marines at Cape San Juan, Puerto Rico to cover the withdrawal of a number of American sailors and civilians who had been stranded in the town of Fajardo. In 1899, Lejeune was transferred to the USS Massachusetts and promoted to the rank of captain.

Following his sea service, Lejeune served a series of tours on recruiting duty in Boston and New York as well as marine barracks duty at various barracks. He also commanded the marine battalion in Panama and the marine barracks at the Cavite Naval Yard in the Philippines. Promoted to lieutenant colonel on 13 May 1908, Lejeune assumed command of the First Brigade of Marines in the Philippines. He returned home to the United States in 1909, and studied for a year at the US Army War College, Carlisle, Pennsylvania. There, Lejeune received rave reviews from college faculty and the acting secretary of war for his scholarly performance and excellent representation of the Marine Corps.

In 1910, Lejeune saw extended service in Cuba, where he was instrumental in helping found the Marine Corps Association, an organization dedicated to promoting service-wide professionalism. Returning to the United States, on 27 November 1913, Lejeune was sent to command the Advanced Base Brigade and soon promoted to the rank of colonel. During this time, a crisis erupted at Vera Cruz, Mexico and President Woodrow Wilson (1856-1924) ordered US naval forces to temporarily occupy the city. From 22 to 30 April 1914, Lejeune participated in the occupation and was singled out for his professionalism and leadership.

Following Vera Cruz, Lejeune was assigned as assistant to the major general commandant, Major General George Barnett (1859-1930). While in Washington, he played an instrumental role in preparing the Marine Corps for possible future service in Europe. He was promoted to the rank of brigadier general on 29 August 1916. When war was declared in 1917, the Corps was well prepared.

From May to August 1917, Lejeune helped organize the 5th and 6th Marine Regiments and took command of the new Marine Corps base at Quantico, Virginia. He remained there until May 1918, whereupon the Commandant sent him to serve on General John J. Pershing’s (1860-1948) staff, at Chaumont, France. From 19 June to 4 July, Lejeune served with the 35th Division in the Vosges Mountains. He earned promotion to major general on 1 July and on 5 July he briefly assumed command of the 64th Infantry Brigade of the 32nd Division. Then, on 25 July, he took command of the 4th Brigade (Marines), 2nd Division. Just three days later, Lejeune took over command of the entire 2nd Division.

Shortly after his taking command, the 2nd Division participated in the American-commanded St. Mihiel offensive. In October 1918, on loan to the French, the 2nd Division was instrumental in the successful allied assault on Blanc Mont ridge. In the third and final phase of the war, the 2nd Division played a major role in the Meuse-Argonne offensive against the Hindenberg Line. Major General Charles P. Summerall (1867-1955), Commanding General of the 5th US Army Corps, cited their performance in forcing a crossing of the Meuse River as "a feat that will stand among the most memorable of the campaign."[1] In fact, the 2nd Division was considered one of the AEF’s most reliable. According to Lieutenant General Hunter Liggett (1857-1935), commanding the 1st US Army, the 2nd Division “was selected and so placed in the battle line that its known ability might be used to overcome the critical part of the enemy’s defense.”[2]

After the Armistice, Lejeune’s 2nd Division served briefly on occupation duty in Germany near Coblenz. For his performance as commander of the 2nd Division, the French government awarded Lejeune the Legion of Honor and the Croix de Guerre. He was also awarded the Army Distinguished Service Medal by General Pershing.

Following occupation duty, Lejeune returned to the United States and led the Division in the victory parades in New York City and Washington, DC. In 1919, the 2nd Division was demobilized and Lejeune returned again to Quantico. The secretary of the navy selected Lejeune to replace the outgoing Commandant of the Marine Corps on 30 June 1920. Lejeune was instrumental in reorganizing the Corps following the end of World War I. He was a leading advocate for professional military education and created an expeditionary force, available at a moment’s notice, for each coast. He also recognized the growing importance of the Asia-Pacific region and asked a number of his officers such as the legendary planner Major Earl H. "Pete" Ellis (1880-1923), USMC, to consider ways the Marine Corps might be utilized in Micronesia and other amphibious settings. During his time as commandant, Lejeune’s marines were sent to preserve order in a variety of locations throughout the Caribbean and Central America including a major combat deployment to Nicaragua in 1926. He is credited with establishing 10 November 1775 as the official birthday of the Marine Corps and placed great emphasis on Marine Corps history and tradition as a means of building up service wide esprit des corps. Retiring from the Marine Corps on 10 November 1929, Lejeune assumed the position of superintendent at the Virginia Military Institute, where he remained until October 1937. In 1942, Lejeune was advanced on the retired list to the rank of lieutenant general and passed away in Baltimore, Maryland on 20 November 1942.