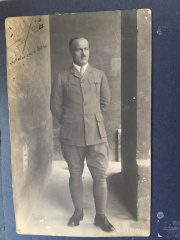 The child of Circassian refugees, Eşref Kuşçubaşı attended military schools before becoming a key “self-sacrificing officer” under İsmail Enver in the Special Organization (Teşkilât-ı Mahsusa), fighting in Libya, the Balkan Wars and World War I. He broke with Mustafa Kemal during the “National Forces” period and went into an extended exile.

Eşref Kuşçubaşı (1883–1964) was born in Istanbul, the eldest child in a family of Circassian exiles. His father, Mustafa Nuri, had found employment in the Ottoman palace and rose to the position of Chief Falconer (Kuşçubaşı) during the reign of Abdülhamid II, Sultan of the Turks (1842–1918). Eşref grew up in nearby Beşiktaş, where he attended local schools before entering Kuleli Military High School. Because of his role in a fight among the students, Eşref was sent to the military lycée in Edirne (Adrianople), a kind of internal exile, before returning to Istanbul and briefly attending the Harbiye Military Academy.

In 1905 he was sent into internal exile again, this time to Arabia along with his father and brother. He eventually escaped from the prison where he was later being kept and lived among the tribes of the Necd (Najd) desert, learning Arabic and tribal customs. He soon resurfaced as an irritant for Ottoman authorities. In the same year he disrupted an imperial pilgrimage caravan headed towards Mecca and kidnapped the son of the Ottoman military commander of Medina on the parade ground in broad daylight. He later claimed these acts were attempts at raising a rebellion in the name of liberty against the government of Abdülhamid II. But from Istanbul’s perspective his actions looked more like brigandage. He was eventually rehabilitated and given a command in the Gendarmerie forces in Izmir some time in 1906.

Even before the 1908 Revolution, Eşref carried out activities for İsmail Enver Pasha (1881–1922), initially in the Balkans and later in Istanbul. His first real chance to make a name for himself came with the war in Libya in 1911. Making his way to Libya as a volunteer, Eşref was in charge of smuggling a group of well-known international Muslim dignitaries through British-controlled Egypt and to the front. There he served with Mustafa Kemal (1881–1938) (Atatürk) and other officers of historical note. Redeployed to counter the more existential threat posed by the first of the two Balkan Wars in 1912, Eşref again saw action in the defense of Istanbul. With the outbreak of the Second Balkan War, Enver tasked Eşref with leading a reconnaissance force behind Bulgarian lines in preparation for the attempt to retake Edirne. He was then sent into Bulgarian territory where, along with Süleyman Askerî (1884–1915) and Eşref’s brother Selim "Hacı" Sami (1887–1927), he formed part of the leadership of a breakaway mini-state called the Independent Government of Western Thrace, an entity that lasted less than two months before it was negotiated away by Istanbul in return for keeping Edirne.

The Ottoman Empire entered the Great War woefully unprepared and reliant on the asymmetrical tactics developed in Libya and the Balkans. As a key member of the Teşkilât-ı Mahsusa (Special Organization), Eşref was involved in various campaigns, including Ottoman attempts at breaching the Suez Canal. Enver specifically tasked him with a mission to deliver gold and orders to Ottoman forces in Yemen, cut off from the rest of the empire by the outbreak of the Hashemite revolt in the Hijaz. In 1917, his forces were ambushed in Arabia and Eşref was turned over to the British. After extensive interrogation, British authorities sent him to a prisoner-of-war camp on Malta. There he sat out the rest of the war before returning to Istanbul in early 1920. In Istanbul he established contact with his fellow “self-sacrificing” officers from the Special Organization, who were now busy organizing the “National Forces” that had formed in response to British and French occupation of Istanbul and the Greek invasion of Western Anatolia. Mustafa Kemal was increasingly prominent in coordinating these “nationalist” efforts from Ankara and appointed Eşref as regional commander for the area around Adapazarı and Bolu to the east of Istanbul. Eşref’s attempts to impose his will on the local population and its Circassian leadership backfired and Eşref was forced to abandon his command. Eşref’s stock fell in Ankara’s eyes and he was soon relegated to a less prominent role. Meanwhile, Ankara had blocked Enver’s return to Anatolia and begun to turn the tide against the Greek forces.

When it was clear that Enver would not return and that many in Ankara were suspicious of Eşref, he followed the path of his fellow Circassian Çerkes Edhem (1883–1949) away from the Ankara movement. In 1920 he crossed the front into the Greek zone, thus effecting a break with Ankara that would seal his fate with the soon-to-be-established Turkish Republic and ensure that he was labeled an “enemy of the nation.” The remaining years of his life were lived in relative obscurity. After being involved in a sporadic and largely ineffective movement aimed at resisting Ankara, Eşref entered a lengthy period of exile, first in Greece and later in Egypt. Although he had been banned from the Turkish Republic in 1923, he was allowed to return after the Democrat Party came to power in the elections of 1950. He spent his later years with his family in Western Anatolia, working on his papers and visiting and corresponding with those of his former comrades-in-arms who were still alive.