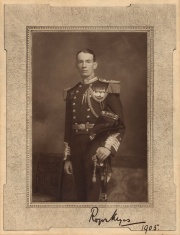 Roger John Brownlow Keyes was a British naval officer of the First World War. As Chief of Staff in the Eastern Mediterranean Squadron, he was a central participant in the Dardanelles-Gallipoli campaign. Subsequently, as Vice-Admiral Commanding Dover Patrol, Keyes led the blocking operations directed at Zeebrugge and Ostend in the spring of 1918.

From an early age, Roger John Brownlow Keyes (1872-1945) had resolved to pursue a naval career. Entering the Britannia as a cadet in July 1885, he proved himself an indifferent student. If lacking in academic accomplishments, Keyes began to demonstrate a command of the practical side of his profession.

Rated midshipman in November 1887, Keyes served on the Raleigh on the Cape of Good Hope Station. Here, Keyes participated in his first "raids" - peacetime serials testing the defences of Cape Town and Simon’s Town. Transfer to the East India Squadron and the corvette Turquoise operating near Zanzibar followed in January 1890. Suppression of the slave trade was a primary task, and though Keyes did not figure in any captures, he was briefly active in the Witu Expedition. Early on, Keyes displayed traits of zeal and initiative prized by the naval service. Those attributes would feature throughout his career.

Returning to England to complete courses for promotion to Lieutenant, Keyes served on the Royal Yacht Victoria and Albert in 1893. This was but an interval, for service in destroyers soon followed and after time with the Devonport Flotilla, Keyes transferred to command of the Hart on the China Station in September 1898. China remained a country in flux and when Britain occupied Kowloon, Governor Sir Henry Blake (1840-1918) expressly acknowledged Keyes’ services. However, it was during the Boxer Rebellion when Keyes outpaced his Britannia contemporaries, being specially promoted to Commander in November 1900 for his part in capturing four Chinese destroyers during operations on the Peiho River.

Next came duty with the Naval Intelligence Department in July 1903 before time as attaché to Rome, Athens, Vienna, and Constantinople from January 1905. He was promoted to Captain that June and, in 1910, became Inspecting Captain of Submarines. His appointment as Commodore in Charge of the Submarine Service ensued in August 1912.

Upon the outbreak of war and commanding his submarines from the destroyer Lurcher, Keyes sought opportunities to employ his submarines aggressively in the North Sea in cooperation with the surface and air elements of the Grand Fleet. To that end, he proposed deploying his submarines off the Bight in ambush where German torpedo boats were known to patrol. In turn, British cruisers would sweep the area between the coast and the enemy’s ships and either engage them directly or drive the enemy into the path of the waiting submarines. The Admiralty accepted Keyes’ plan and action off the Heligoland Bight followed, resulting in the destruction of the Mainz. Though Keyes could lay no claim to the German cruiser’s end, he played a direct role in rescuing 220 of her crew and had been the driving force in setting the operation in motion. Transferred to the Inflexible in February 1915, he became Chief of Staff to Sir Sackville Carden (1857-1930) commanding the Eastern Mediterranean Squadron. Here, he never lost faith in the possibility of forcing the Dardanelles. Others, though, had to reckon at what cost and opted to end efforts after ten months’ failure. In a woeful campaign, the evacuations of the landed force remained the one true success, with Keyes apportioned a major share of the credit.

Having become captain of the battleship Centurion in the Grand Fleet in June 1916, the following April saw Keyes’ promotion to Rear-Admiral. Appointed Admiralty Director of Plans in October 1917, Keyes assumed command of the Dover Patrol on 1 January 1918. The toll taken by U-boats in British waters remained severe and now the Michael offensive (21 March – 5 April 1918) aimed to isolate Allied armies from the Channel ports which sustained them. The bold blocking operations directed at Zeebrugge and Ostend commanded by Keyes in April and May 1918, if only partially successful, lifted the spirits of a nation from its nadir. In September 1918, Keyes was knighted and, in recognition of his sterling leadership during the conflict, received a baronetcy and a grant of £10,000. His star was ascendant with prospects seemingly assured.

Keyes commanded the Battle Cruiser Squadron for two years, being promoted Vice-Admiral in May 1921. Serving as Deputy Chief of the Naval Staff from November 1921 until May 1925, he was then promoted to Acting-Admiral and given command of the Mediterranean Station. His handling of a minor contretemps in the battleship Royal Oak in March 1928, however, cast a pall over his judgment. The catalyst to these events was the performance of the ship’s Marine band; the underlying cause was the poor relations between an embarked flag officer and the Royal Oak’s commanding officer. Keyes promptly relieved Rear-Admiral Bernard Collard (1876-1962), Captain Kenneth Dewar (1879-1964), and the executive officer. If correct in his actions, the repercussions to Keyes’ fortunes remained profound.

After a period of half-pay, Keyes became Commander-in-Chief, Portsmouth and, though promoted Admiral of the Fleet in May 1930, whatever chance existed of becoming First Sea Lord was doomed by the mutinous acts arising in the Atlantic Fleet at Invergordon in September 1931. Following four years of unemployment, Keyes retired from the navy in May 1935.

Politics beckoned, with Keyes becoming the Member of Parliament for Portsmouth North in 1934. Recalled for war service in May 1940, following the disaster of Norway, Keyes was appointed Director of Combined Operations. The position proved a proverbial fifth wheel for one so senior in rank and so forthright in views; thus, his appointment was terminated in October 1941. Created Baron Keyes of Zeebrugge and Dover in 1943, Keyes’ career testified that the spirit of getting to grips with the enemy no matter the circumstances remained alive in the 20th century Royal Navy. Such was his credo and such remains his legacy. 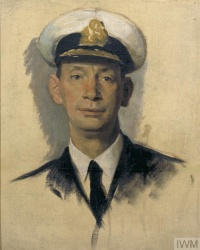