The Finnish Jäger movement recruited approximately 2,000 men to the German Armed Forces during the First World War. After their service on the Eastern Front, the Jägers formed the cadres of the White Army in the Finnish Civil War of 1918.

Emergence of the Movement↑

The Jäger movement had its roots in the Finnish academic youth’s resistance activism against Imperial Russia. With the outbreak of the First World War (WWI), the possibility of forming a volunteer unit for the German army was raised in student circles at the University of Helsinki. The decision was made at the Student House “Ostrobothnia” on 20 November 1914, and the negotiations with German representatives were conducted by Dr. Herman Gummerus (1877-1948) in Stockholm. The initiative was formally accepted by the German Auswärtiges Amt and military authorities on 26 January 1915.

Russian authorities were aware of the movement. A number of activists were jailed in the Shpalernaya prison in Petrograd; these men became known by the nickname kalterijääkärit (behind-bars Jägers). A shootout also occurred in the locality of Simo in Northern Finland, where the activists clashed with Finnish policemen and Russian soldiers in 1916.

Jägers on the Eastern Front↑

The first 200 volunteers were trained at the Pfadfinder course in the Lockstedt garrison in Schleswig-Holstein. As the number of men increased, this Ausbildungstruppe Lockstedt was organized into a full military unit. The unit was christened as the 27th Royal Prussian Jäger Battalion (27. Königlich-Preußisches Jäger-Bataillon) on 9 May 1916. The Battalion’s commander was Major Maximilian Bayer (1872-1917), a famous German scouting activist. Close to 1,900 men passed through the ranks of the Battalion, which also had two Finnish nurses, Baroness Ruth Munck (1886-1976) and Saara Rampanen (1886-1974).

The Battalion served on the Riga front in 1916-1917. In the midsummer of 1916, three Finnish Jägers deserted and defected to the Russian side. A brief crisis occurred in September 1916, when some rank-and-file Jägers protested against front line service and questionable German promises. The restive Jägers, all in all 224 men, were removed to a forced labour detachment at Altona-Bahrenfeld. Meanwhile, an additional 512 were found unfit for duty and employed as civilian workers in the German war industry.

The Battalion gained experience in trench warfare, although its participation in offensive operations was limited. The Battalion’s artillery team distinguished itself in the Battle of Ekkau-Kekkau (Jecava-Kekava) on 18 July 1916, participating in the halting of General Radko Dimitriev’s (1859-1918) Russian attack. The soldiers of the Finnish sapper company stormed the Russian trenches at the Battle of Schmarden (Smārde) on 25 July 1916; eight of these Jägers were awarded Iron Crosses. The Battalion also participated in the winter battles on the Aa (Lielupe) river in February 1917. During the last occasion, Oberzugführer Armas Ståhlberg (1892-1918) shot rank-and-file Jäger Matti Saarikoski (1890-1917) for defying his orders. This event had a demoralizing effect on the Battalion.

After the winter battles, the Battalion moved to the city of Libau (Liepāja), where it remained until February 1918. The men received intensive further military training while waiting to be repatriated to Finland in the aftermath of the Russian revolution. The Jägers produced their own manual, Suomalainen sotilaskäsikirja (Finnish Military Handbook). As a sign of esprit de corps, Jäger Lieutenant Heikki Nurmio (1887-1947) wrote lyrics to the “Jägers’ March”; the final composition was produced by Jean Sibelius (1865-1957).

During its front line service, the Battalion lost thirteen men killed in action and forty-nine wounded. In addition, fifteen died of diseases and two were diagnosed as “incurably insane”. The railway accident in Osnabrück on 15 January 1918 resulted in a further twelve Finnish Jägers dead, in addition to three wounded and one diagnosed with a nervous breakdown.

In addition to the men who served on the Eastern Front, a number of Jägers were deployed for reconnaissance and sabotage duties in the Far North. A sabotage commando of Finnish Jägers destroyed the Russian munitions depot in Kilpisjärvi in Lapland in June 1916.

Return to Finland and Post-War Era↑

Jägers in the Finnish Civil War↑

The repatriation of the Jägers began in the autumn of 1917, when the first vorkommando of 112 men was sent to Finland at the request of the Finnish Military Committee. With the outbreak of the Red Revolution in January 1918, the Jägers became a valuable asset for the Finnish government in the suppression of the revolution. Most of the remaining Jägers, approximately 700 men, returned to their homeland on 25 February 1918, when they arrived at the port of Vaasa on the steamers “Arcturus” and “Castor”. Close to 400 men remained in Germany, either on their own accord or because they were considered to be politically unreliable and harbouring socialist sympathies.

During the Finnish Civil War, Jägers served mainly as officers and Non-Comissioned-Officers in the conscripted “Jäger infantry” of the White Army. Not all Jägers approved of Commander-in-Chief Carl Gustaf Emil Mannerheim (1867-1951), a former Tsarist general. This clash of authority resulted in the “Jäger Crisis” in March 1918. The role of the Jägers proved nonetheless indispensable for the White victory, especially in the Battles of Tampere and Viipuri. The Jägers were involved in the wartime White terror, particularly the mass executions in Viipuri on 30 April and 1 May 1918.

During the 1920s, Jäger officers established themselves as the military elite in the Finnish army, replacing most of the older officers who had served in the Russian army. High-ranking Jäger officers served with distinction in the wars against the USSR in 1939-1940 and 1941-1944. The last Jäger to serve as commander of the Finnish armed forces was General Kaarlo Heiskanen (1894-1962), who retired in 1959. Another Jäger officer, Lieutenant General Armas-Eino Martola (1896-1986), commanded the United Nations peacekeeping forces on Cyprus from 1966 to 1969. 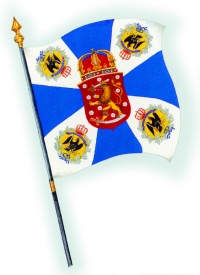 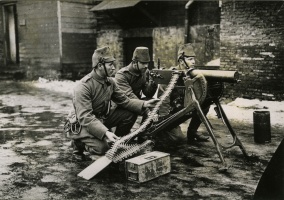 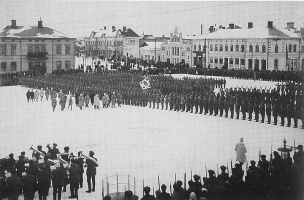