Although the Iron Cross was originally created only for the duration of the Wars of Liberation, it was revived in 1870, 1914 and finally 1939. It became the quintessence of Prussian, and ultimately German, military tradition.

When the Iron Cross was introduced on 10 March 1813, it became the first Prussian decoration that would be awarded across the board to men of all ranks and social status for exceptional courage in the field. It was thus a symbol of popular uprising linked to an egalitarian practice.

Napoleon III, Emperor of the French (1808-1873) declared war on Prussia on 19 July 1870. French military activity in the Metz-Strasbourg area caused the southern German states, which up until this point had been primarily concerned with their individual sovereignty, to actively fulfil their protection and defence alliances with Prussia. The aggressor was once again France, who this time had not only humiliated the Prussian monarch but was also threatening Germany as a whole. Given the similarity between this political and military situation and that of 1813, reinstating the Iron Cross was a logical decision. The Foundation Decree for the Iron Cross of July 1870 once again emphasised that this was, as in 1813, a Prussian decoration only valid for this war. However, in connection with the preamble, it was now possible for officers and soldiers from states allied to Prussia to earn it. The Iron Cross thus became a unifying symbol of the individual German states in military affairs and politics.

On 5 August 1914, Wilhelm II, German Emperor (1859-1941) signed the Iron Cross Foundation Decree again. Apart from a few exceptions, no one doubted that the Empire’s enemies had forced this war upon them. Thus, it was easy to create a link to the Iron Cross to order to use it as a symbol to reiterate the coming war’s significance and purpose to all Germans.

In the years between 1914 and 1918, the rationalisation and industrialisation of the machinery of war gradually lessened the importance of individual deeds or achievements. This meant that the symbols of recognition for achievements also underwent a transformation. Although the combatants were now just cogs in the overall military operations, they were still motivated by compensations; their commitment and self-sacrifice had to be rewarded. The more the front line combatants’ personal courage was negated by the war’s industrialisation, the more often soldier casualties of battles involving heavy losses were awarded the Iron Cross. For these men, many of whom were horribly disfigured or no longer suited to civilian employment, the decoration served as a gesture of consolation and social recognition. While the Iron Cross was a symbol of victory until 1914, the war’s progress led to an inflationary increase in the number of Iron Crosses awarded. This was intended to uphold the illusion of each individual soldier’s value and, in view of the Foundation Decree and its various revisions, to counteract unjust award procedures. Both contributed to the erosion of motivation within the army. By the time the German state collapsed on 9 November 1918, 163,000 Iron Crosses First Class had been awarded. The Iron Cross Second Class had been awarded to 5,000,000 members of the army. The total numbers of war awards in 1914-1918, including award for services in eastern border protection, were 218,000 Iron Crosses First Class and 5,196,000 Iron Crosses Second Class. Almost every third soldier of the First World War received the Iron Cross.

Nevertheless, the military institutions and their normative symbols were not rejected. Although modern technology and the resulting mechanised and trench-based warfare increasingly dissolved the traditional ideals of soldierly heroism, the Iron Cross remained an omnipresent icon throughout the whole of the First World War. The black and white cross decorated the planes of the German Air Forces and items of large military machinery. Field newspaper editors and the families of fallen soldiers also commonly used the Iron Cross to adorn obituary notices of those who died in battle, in field hospitals or as prisoners of war. This symbol of military honour was used not only to propagate an exaggerated and ideologically based nationwide discourse during the war but also, after defeat, to give structure or justification to the social relations between lower-ranking soldiers and their superiors, between the front and home, veterans and civilians, the military man and civilian society. The Iron Cross united the individual’s pride in his wartime achievements with the entire nation’s self-sacrifice and loss of lives. Consequently, the guiding principle of military honour remained intact even after the war was over as a symbol that kept the ideas and the historical experiences of a wartime generation visibly alive. 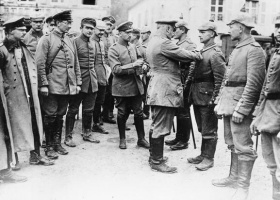 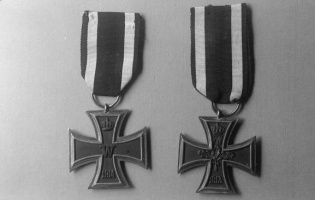