Fought between the Finnish Red and White forces from 15 March to 6 April 1918, the Battle of Tampere was the decisive confrontation of the Finnish Civil War. After a siege and bombardment, the White forces stormed and captured the city.

The Prelude to the Battle↑

With the outbreak of the Finnish Civil War in January 1918, the industrial town of Tampere became one of the strongholds of the revolutionary Red forces. The large working-class population and the central location as a railway junction made the town the main Red base on the Northern Front. More than 6,000 men and women joined the Tampere Red Guard, most of them young industrial workers or craftsmen.

During February, the front line formed in Vilppula, sixty kilometres northeast of Tampere. The Red offensives, undertaken with modest support from Russian soldiers and officers, were unsuccessful, with casualties heavier than those of the defending Whites. The Reds supported their operations with artillery, armoured trains, and four Nieuport biplanes used for reconnaissance and propaganda purposes.

The Collapse of the Red Northern Front↑

In early March, the White high command began preparations for a major offensive against Tampere. The goal was to besiege one of the most important Red citadels and destroy the main Red forces in western Finland. The negotiations between the Vaasa Senate - the Finnish White government - and Imperial Germany also had their effect on the planning. With German assistance secured, the White Commander-in-Chief Carl Gustaf Emil Mannerheim (1867–1951) wanted to score a major victory before German intervention, for reasons of prestige.

The operation began on 15 March, resulting in a White breakthrough on the Northern Front. The Red forces in Kuru, supported by the remaining Bolshevik Russian soldiers, were routed on the first day, while the locality of Länkipohja was captured by the Whites in the bloodiest engagement of the war so far. Executions of Red prisoners-of-war became common. Starting in mid-March, the atrocities and reprisals committed by the Whites began to gradually exceed the Red terror.

On 18 March, the Whites attacked the Orivesi railway station. The Reds were able to repel the attack with their armoured train, but the chaotic situation forced them to evacuate the locality on the following day. Although the Northern Front was crumbling, the Reds managed to delay the White advance on the western side of Tampere.

The Siege of Tampere and “Bloody Thursday”↑

By the end of March, the situation in Tampere became desperate, with the influx of refugees and unrest among the Red forces. The Red Commander-in-Chief Hugo Salmela (1884–1918) was nonetheless able to reorganise the city defences. Nearly 15,000 soldiers were mustered to hold off the Whites, including three companies of women totalling 300 female soldiers.

As the White forces approached the outskirts of the city from northeast, the opposing forces clashed in Vehmainen, ten kilometres east of Tampere, on 23 March. The White artillery fire forced the Reds to evacuate the eastern city district of Tammela. The Red counterattacks with armoured trains could not prevent the Whites from conquering the village of Kangasala. On 24 March, the Whites also captured the strategic locality of Lempäälä, which severed the railway between Tampere and Helsinki, cutting off the supplies to the city. On 26 March, the Whites captured the railway station of Siuro to the west of Tampere, completing the siege of the city.

With a good portion of the Red soldiers defending their homes and families in an encircled city, the fighting became very intense. The White attacks on 27 March were beaten back, and the Whites had to resort to their best reserve forces, including the volunteer Swedish Brigade and the new conscript regiments trained by Jäger soldiers. On "Bloody Maundy Thursday" of 28 March, the Whites attempted to break the Red defences in Kalevankangas Cemetery. The attack against the Red machine guns and artillery positions cost the Whites more than two hundred of their best men, including many officers and non-commissioned officers, and at least four times as many wounded. The eastern city districts still remained in Red hands, and fighting halted for a full week.

While the Whites were preparing a new push against the city, the Reds tried to break the siege from the south. The relief expedition was assembled by Eino Rahja (1885–1936), a notable Red commander and a friend of Lenin. Rahja’s forces attacked the Whites in Lempäälä on 30 March and 1 April, but could not relieve the city. On 28 March, Salmela died in an accidental discharge of hand grenades at the Red munitions depot, and was succeeded by Red cavalry commander Verner Lehtimäki (1890–1938).

Storming of the City↑

The final assault on Tampere began the night before 3 April, with an intense artillery bombardment of thirty-four guns. The barrage was followed by an attack of four White battalions against the eastern city quarters. The first breakthrough was made by the company of Jäger Lieutenant Gunnar Melin (1883–1951) with conscripts from Swedish-speaking Ostrobothnia. Melin’s company broke through the Red defences and crossed the dam bridge over the Tammerkoski rapids near the cloth mill. The men captured the Näsilinna Palace in the heart of the city, defending themselves against Red counterattacks before escaping over the frozen Lake Näsijärvi.

By the evening, the White forces had reached the rapids from the east, north, and south. The Reds orchestrated a successful fighting retreat across the Hämeensilta Bridge, abandoning the eastern half of the city to the White forces. The eastern districts of Kyttälä and Tammela suffered great damage in artillery fire and street fighting, and over 1,700 civilians had to take shelter in St. John’s Cathedral.

While the White forces operating on the western side of the city kept up the pressure on Red defenders, the task of capturing the city centre fell on the troops advancing from the east. On the morning of 4 April, the Whites crossed the railway bridge over the rapids and recaptured Näsilinna. Another column of Whites crossed the dam bridge at the southern end of the rapids, capturing the industrial buildings. As the fighting continued street by street in the city centre, the Red armoured train was taken out by a White artillery grenade.

The last Red troops withdrew to the districts of Pyynikki and Pispala on 4 and 5 April, and the Red defenders of the City Hall surrendered at 5:30 PM on 5 April. The Whites assembled their prisoners on the Central Market Square. Isolated groups of Reds, including Lehtimäki and most of the top brass, escaped the city. The last Red defenders in Pyynikki surrendered on 6 April, leaving the entire city in White hands.

With more than 30,000 combatants, the Battle of Tampere was one of the largest battles in the history of the Nordic countries. The Whites lost approximately 800 men and saw another 1,000 men wounded. According to the estimates of the Finnish War Victims Project, the Red losses amounted to 1,100 killed, one-third of this figure resulting from reprisals and shootings immediately after the surrender. In addition, approximately 100 to 200 Russian soldiers were murdered by the White forces.

The Whites took 11,000 Red prisoners, at least 290 of whom were executed after sentences by court martial. At least 1,400 prisoners died in the Tampere prison camp. All in all, eighty residential and forty-six industrial buildings were destroyed, and 504 families were left homeless. 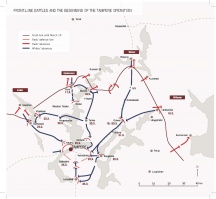 The Front-Line Battles and the Beginning of the Tampere Operation