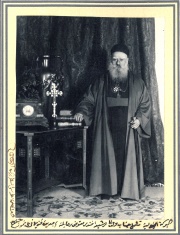 Elias Hoyek was Patriarch of Antioch for the Maronites. He is considered to be one of the fathers of Lebanonism, a symbol of resistance against Ottoman hegemony, and the founder of Lebanese Independence.

Born in December 1843 in the village of Hilta in the Batrun district of northern Lebanon, Elias Hoyek (1843-1931) joined the Jesuit seminary at Ghazir (Kisrawan) in 1859. In 1866, he was sent to Rome to further his studies at the College of the Propaganda Fide. After being ordained as a priest in 1870, he returned home. He was consecrated as bishop in December 1889 and was elected Patriarch of the Maronites on 6 January 1899.

Hoyek, who had plebeian roots, joined the clergy after receiving an intensive domestic and western education that furthered his social advancement. Groomed in a typical Maronite environment, he fully adopted the mainstream convictions of his country folk: obedience to the Holy See in matters of religious dogma and fidelity to France, the political protector.

Following the sectarian strife of 1860, the Mutassarifiya of Mount Lebanon was created as a semi-autonomous province of the Ottoman realm. This formula granted Lebanon “a long peace,” after the expression of Akarli. Maronites even felt safe enough to dream that full independence could someday be won with the assistance of France, which had acted as protector of eastern Christians and, more specifically, of Catholic Uniates since Louis XIV, King of France (1638-1715). However, Maronites still had to give assurances to Istanbul regarding their loyalty to the Ottoman Empire. All Maronite patriarchs and bishops were confronted with the question of the berât, an administrative formality granted by the Sultan upon promotion of clergymen to high ecclesiastical positions. The berât constituted a formal recognition by Turkish authorities and insured a certain amount of protection. Maronite prelates successfully tried to avoid making such requests. They were supported by the French in their effort to assert their independence and special privileges. On the whole, France, known as “al-um al-hanun” (“tender mother”), was looked upon as the provider of security in a Muslim-dominated area, and ultimately as the power that enlarged Mount Lebanon proper and granted it independence from the Syrian hinterland.

Hoyek’s tenure can be divided into three distinct periods. The first period lasted from Hoyek’s election to 1914. During this time, he had to give assurances to the Sublime Porte that the Maronites were loyal subjects of the Ottoman state while refraining from requesting the berât. He managed to receive an Ottoman medal (nishan) when visiting Istanbul in 1905. He also had the usual problems with the mutassarifs on questions of precedence, but his authority was mostly challenged by anticlerical societies formed on the European model. Liberal elites and freemasons, although a minority, resented the hegemony of the Church, backed by the Jesuits, in the educational and political field, and were active in opposing the heavy hand of the clergy.

The second period of his tenure lasted from 28 October 1914 (the day the Ottoman Empire entered the war) until the withdrawal of Ottoman troops from Lebanon in early October 1918. France could no longer provide political protection, as it was the declared enemy of the Turks. This second period is remembered as a time of conflict between two personalities: Hoyek and Ahmet Cemal Pasha (1872-1922), the military governor of Syria and commander of the Fourth Army, who insisted that the Patriarch request the berât. Hoyek had no choice but to submit.

Cemal Pasha did not force Christian Lebanese to serve in the military. Nevertheless, war brought misery and severe food shortages to the area due to the allied naval blockade and the land blockade decreed by Cemal Pasha, as well as waves of locust attacks. It is reported that Mount Lebanon lost one-third of its population due to famine and related diseases. Additionally, some Maronite notables were executed on charges of high treason while others were imprisoned or exiled. Rumors circulated that Hoyek was to be arrested due to his attachment to French interests.

The third period of Hoyek’s tenure as patriarch lasted from 1918 to 1931; it was a period during which Hoyek dealt with the French mandate in Syria and Lebanon, a result of the Sykes-Picot Agreement. His main effort was to enlarge Mount Lebanon proper by including Beirut and Bekaa, Tripoli, Sidon and the Tyre region, to grant Lebanon independence from Syria proper, and to bring it under French mandate. In 1919 he traveled to France to vindicate his claims at the Paris Peace Conference. He was successful in his endeavor: on 1 September 1920 Greater Lebanon was proclaimed by the French High-Commissioner, General Henri Gouraud (1867-1946). The creation of Greater Lebanon satisfied the Maronite community, the largest community in terms of population at that period, to the dismay of the proponents of Arab nationalism supported by Muslim communities which aimed to achieve union with Syria.

Widely acclaimed in the last period of his life, Hoyek is considered in official circles and by Maronite historiography to be an important symbol of resistance to Ottoman hegemony and the founder of Lebanese independence. Hoyek died in 1931. 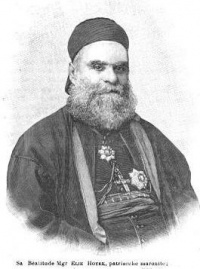