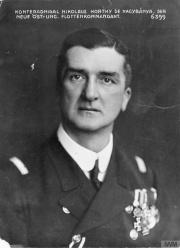 Horthy was a naval officer of Austria-Hungary. During the First World War he was first in command of a cruiser and then chief commander of the navy. After the war he took part in the counter-revolution in Hungary against the Bolshevik regime; following this he was elected regent of the country and stayed in charge until 1944.

Admiral Miklós Horthy (1868-1957) was born into a family of noble landowners in the Hungarian Great Plain. These origins did not presuppose that Horthy would become a naval officer and this is not the first paradox in his biography. Horthy chose the marine after his older brother was killed by accident during a training exercise at the naval school. His abilities were more oriented toward practical knowledge than theory. His career was characterized by two major opportunities that were key elements to the construction of his image after World War One.

First, in 1908, during the crisis following the annexation of Bosnia-Herzegovina by Austria-Hungary, Horthy was in command of the embassy ship in Constantinople and his reliability was appreciated by Margrave Johann Pallavicini (1848-1941), the Austro-Hungarian ambassador, who then recommended him in Vienna. Horthy was selected to be one of the adjutants of Francis Joseph I, Emperor of Austria (1830-1916) in 1909. This position was again paradoxical because Horthy was only the second navy officer in charge (the other adjutants belonged to other arms), a Hungarian, and because he was not a Catholic, but a Calvinist. However, he not only made himself popular among court members, among them the future Emperor Charles, but his wife also contributed to his career by being acquainted with prominent persons.

As the First World War broke out, Horthy was sent to a command at sea as commander of the cruiser Novara. His main task was to try to break the blockade in the south Adriatic in order to reach Aegean Sea. In May 1917, one of his actions brought him fame after his ship came under fire from French and British vessels. He escaped, saving his ship and most of the others that had accompanied the Novara in this operation, but he was seriously wounded. The legend of “Novara’s hero” was born out of this action and it was to become an important element of Horthy's image after the war. In Hungary, his name became known to the public for the first time. In March 1918, Horthy was appointed by Charles I, Emperor of Austria (1887-1922) as chief commander of the navy, thus coming before more senior and higher ranked officers. This was clearly a sign of Charles’ familiarity with him and a proof of his ability. As the national councils of the nationalities were formed and became, in October 1918, the entities to whom power was transferred, Horthy was obliged to “deliver” the ships that were still harbored in Pola (Pula) to the Yugoslav National Council. Horthy had to leave Austria-Hungary’s flagship bearing the emperor’s motto, Viribus unitis, just as the monarchy ceased to exist. As a symbol of this demise, the ship was mined by Italian divers and sank together with its newly appointed Croatian commander Janko Vuković (1871-1918), who had been Horthy’s second in command.

After a last farewell to Emperor Charles, Horthy went back to Hungary. But in the meantime, the country was undergoing a series of troubles: independence in November 1918 with proclamation of a republic that was soon contested by Bolshevik forces. The country was invaded by the Romanian army, which hoped to annex Transylvania, and Hungarian troops were fighting against Czech regiments over Slovakia. Unable to make itself heard by the Entente and challenged by the Communists, the government was overrun. In March 1919, the Soviet Republic was proclaimed and lasted until August. Counter-revolutionary elements made up of officers and politicians gathered in south Hungary; this reaction was welcomed by the Entente forces. In May 1919, Horthy was approached by the group of Hungarian exiles of Vienna around Count István Bethlen (1874-1946) as well as by the counter-revolutionary government of Count Gyula Károlyi (1871-1947). He was asked – being the highest ranked officer present in the country – to take command of the “National” army that was being constituted to restore order: against the Bolsheviks on one side, and against the Romanians who occupied most of the country on the other side. He accepted and this as one of his first involvements that were later to weigh on the perception of his actions.

The “National” army was an instrument of reaction and some of its units committed crimes that were covered by Horthy. He justified the exactions perpetrated mainly against Jews suspected of sympathizing with communism with his anti-communist stance. Although emancipated since 1867, they were seen as traitors to the nation whom they had now “stabbed in the back”. As soon as the army arrived in Budapest on 16 November 1919, Horthy tried to assure the Jewish community that nothing was to be undertaken against them, but already, the Hungarian-Jewish symbiosis that had marked the 19th century was under attack. Horthy had done nothing to prevent the excesses of his soldiers, thus becoming hostage to their ideology. Many were to become the bearers of fascism in the 1930s. He could have then retired but he was certainly convinced by now of his role as “savior of the nation” and he says in his memoirs that all he did was to “sacrifice” himself for the sake of Hungary. This notion was to guide his self-justification until the end in October 1944.

In March 1920, Horthy was elected by the parliament as regent of Hungary: the country was restored as a monarchy, but no king could be chosen for the moment because the peace treaties prevented the Habsburg dynasty from coming back; there was no consensus on another candidate for king. When Charles made two restoration attempts in 1921, he was confronted by Horthy who refused to relinquish his power. From then on, Horthy was the firm and undisputed leader of the country, a situation that would certainly have given him the means to change the orientation of the regime.

The Horthy regime developed an authoritarian and reactionary ideology that was not fascist but constantly challenged by it, for many people who were near to Horthy sympathized with Italian and then German fascism. This led to a permanent overbidding, with the most radical elements on one side, and the demands of Germany on the other side. Hungary was isolated in Central Europe where the Little Entente (Czechoslovakia, Yugoslavia and Romania) had been formed against her; the revisionist ideology rejecting the Treaty of Trianon was undeniably the strongest factor uniting the country behind Horthy.

After the outbreak of the Second World War, Germany pushed for the greater involvement of Hungary, which was still refusing to join. The Germans occupied Hungary in March 1944 and took Horthy to Germany in October. He was released by American troops in May 1945. In January 1949, he emigrated to Portugal where he died in February 1957.