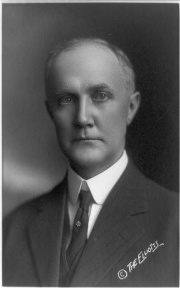 Thomas Watt Gregory served as Attorney General of the United States during World War I. He played a key role in developing the Espionage and Sedition Acts to suppress dissent during World War I and enforcing Selective Service draft laws. He served as an advisor at the Paris Peace Conference.

After growing up in the post-Civil War South, Thomas Watt Gregory (1861-1933) received his law degree from the University of Texas in 1885 and practiced law in Austin, Texas, for fifteen years. He eventually used his law practice as a means to enter state politics and developed a relationship with fellow Texan Colonel Edward M. House (1858-1938). Politically, he was essentially a Conservative Democrat.

Gregory, along with House and others, supported Woodrow Wilson’s (1856-1924) presidential campaign in 1912.

In return for his support, Gregory received several positions in Wilson’s administration but reached his pinnacle with his appointment as Attorney General on 29 August, 1914. With the United States’ declaration of war in April, 1917, the Department of Justice was responsible for detecting and preventing possible espionage and sabotage by foreign government agents. Gregory also endorsed and sanctioned the American Protective League, a group of private citizens who worked alongside the federal government to identify German sympathizers and war dissidents.

Along with fellow Texan and Postmaster General Albert Sidney Burleson (1863-1937), Gregory supported passage of the Espionage Act in 1917, and its expansion in the Sedition Act of 1918. The Espionage and Sedition Acts were written in response to what Gregory termed enemy “warfare by propaganda.” However, certain provisions of the legislation actually limited the constitutional right to free speech by making it a crime to express disloyal sentiments about the U.S. Government, the Constitution, the flag, and the nation’s military forces. Despite their controversial nature regarding the limits of free speech, both acts passed Congress by a large margin and were later ruled constitutional by the Supreme Court.

Gregory became a controversial figure for allowing a civilian ultra-patriotic group, the American Protective League, to round up suspected draft dodgers, so-called slackers, in the spring of 1918. Once the war ended Gregory came under increased attack for the Justice Department’s overall heavy-handed tactics to suppress dissent and draft evasion. He resigned as Attorney General on 4 March 1919.

Wilson then invited Gregory to attend the Paris Peace Conference as an advisor, although he did not play a particularly significant role. After the war, Gregory remained involved in politics and returned to Houston, Texas, where he resumed his law practice. He supported Franklin Delano Roosevelt (1882-1945) for president in 1932. While visiting Roosevelt in New York after his election, Gregory died of pneumonia on 26 February 1933. An important figure in the Wilson Administration, Thomas Watt Gregory’s role in suppressing dissent through limiting civil liberties posed important questions related to the U.S. Constitution and the power of the federal government during wartime. 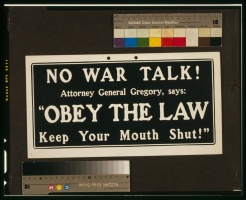