A division within the Committee on Public Information (CPI), the Ford Division, created in the spring of 1917, was responsible for creating and distributing “scholarly” propaganda to schools and colleges throughout the country.

The Creation of the Ford Division↑

The Committee on Public Information’s Division of Civil and Educational Publications (DCEP) was more commonly known as the “Ford Division” after its wartime chief, Guy Stanton Ford (1873-1962). After establishing the DCEP, CPI chief George Creel (1876-1953) sought a capable leader to systematically elaborate on President Woodrow Wilson’s (1856-1924) pronouncements on the war as well as to serve as a liaison between the CPI and the nation’s educational institutions. Ford’s enthusiastic patriotism, scholarly qualifications, and position within the U.S. academic community made him ideal. After the U.S. declared war on Germany, Ford publically called for using spring commencement ceremonies to inspire patriotism. A respected scholar - at the time of his appointment he was professor of European history, chair of the history department, and dean of the graduate school at the University of Minnesota - Ford had invaluable contacts in the U.S academic community. Moreover, by virtue of having completed his graduate work in Berlin, Ford was considered an expert on Germany and its history.

The DCEP coordinated the writing and distribution of so-called educational materials. Given its resources, the division’s contributions to U.S wartime propaganda were notable. Under Ford’s direction the DCEP’s small staff of two assistants, both university professors, and a small number of stenographers coordinated the work of more than one hundred social scientists, especially historians, throughout the country. In selecting the topics on which contributors wrote, Ford at first paid particular attention to the needs of local groups and civic organizations. However, when this approach resulted in a flood of unsolicited and unusable contributions from the general public, the DCEP took over the planning of material. In total, the DCEP issued 105 historical and pictorial works with a cumulative print run of more than 75 million during its eighteen-month existence. The Division’s publications ranged from short leaflets to the massive 321-page War Cyclopedia: A Handbook for Ready Reference on the Great War.

As a scholar, Ford’s avowed mission was to avoid the pitfalls of propaganda and produce publications “as accurate as scholarship would make them” because “truth...[was] the best propaganda.”[1] Scholarly analysis of the DCEP’s work suggests otherwise.[2] While less overtly germanophobic in tone than other CPI units, such as the Pictorial Publicity Division, DCEP publications nonetheless did not always fulfill Ford’s publicly-stated reluctance to “further anything which sank to the level of vituperation and [name] calling.”[3] For example, the pamphlet America and Allied Ideals was described by its author as “distinctly propagandistic,” while the Stanford historian John Tatlock’s (1876-1948) Why American Fights Germany used documented “facts” of German conduct in Belgium and France to create a lurid imaginary vision of a German invasion of the U.S.[4] Through selection and omission, the War Cyclopedia was, in the words of one critic, a “highly-partisan introduction to the war and America’s role in it.”[5] Most egregious was Ford’s role in helping authenticate documentary materials purportedly proving Germany’s intent to spread revolution throughout Eastern Europe - documents which even zealous British and French propagandists rejected as forgeries.[6]

The official disestablishment of the CPI by Congress in June 1919 ended the DCEP’s work. Ford returned to academia, and the division’s records were turned over to the Council of National Defense. While Ford defended his work in the postwar period, critics such as Walter Lippmann (1889-1974) were more critical.[7] As a result, during World War II the U.S. Office of Censorship used different propaganda strategies. 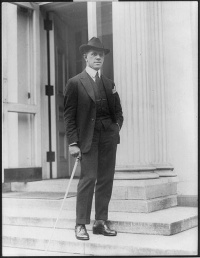