Rahmi Bey was governor of Izmir during the First World War. As part of the Unionist plans for the Turkification of the region, he pursued anti-Greek policies, yet he acted in favor of the Levantines and was not involved in the wholesale deportation of Armenians. After the war, he was exiled to Malta. In 1926, he was implicated in the assassination attempt against Mustafa Kemal in Izmir. Rahmi then left Turkey and did not return until 1933.

Mustafa Rahmi Evrenoszade (1873-1947) was born in Ottoman Salonica to the large land-owning family of Evrenos. His education followed a similar pattern to that of leading Unionists: after attending secondary school in Salonica, he went to Istanbul for higher education. Unlike, however, the future officers of his generation who would be associated with the Unionist movement, he attended the Law School which would put him among the civil leaders of the movement. Right before graduation, he was arrested for his membership in the Committee of Union and Progress (CUP). He escaped prison and went to Europe.

In the late 1890s, he worked for the CUP in Geneva with Abdullah Cevdet (1869-1932). At this time, he was involved in negotiations with the Ottoman government as the latter was trying to coopt the Geneva branch. To influence the negotiations, Abdullah Cevdet and Rahmi established a society called the Reşadiye Committee.

In 1906, along with Mehmed Talat Pasha (1874-1921) and Ahmet Cemal Pasha (1872-1922), Rahmi was among the founders of the Ottoman Freedom Society in Salonica. The establishment of the Society and its connections to the Macedonian grassroots military activism was a major step in the radicalization of the Young Turk movement. The subsequent unification of the Society with Ahmet Rıza’s (1858-1930) Paris-based Committee of Progress and Union consolidated the movement and shaped the CUP.

Following the Unionist government coup, Rahmi Bey was appointed as the governor of Izmir (Aydın province) on 19 September 1913 and remained in this position until 24 October 1918, right before the declaration of the Ottoman Armistice at Mudros. At the end of the Balkan Wars in 1913, the Ottomans had lost the east Aegean islands to Greece, turning Izmir and its environs into a border zone. During the First World War, the area was significant since it was strategically situated at the entrance of the Dardanelles and was subjected to Entente bombardment. Izmir was one of the leading port cities of the empire in the 19th century with a growing multi-cultural population dominated by non-Muslims. Particularly Greek Orthodox Christians and Levantines including the British Whittalls and the French Girauds were influential in trade, business, and social activities of the city.

As a leading Young Turk, one of the main reasons why Rahmi was appointed as the governor of this prominent city was the Unionist aim of demographic and economic Turkification of the region. His appointment was part of a broader government shuffle including the appointment of Celal Bayar (1883-1986) as the head secretary of the local branch of the Committee in the Aydın province.

Right after taking up office in 1913, Rahmi pursued the anti-Greek boycott, which had begun a few years earlier. He was also involved in negotiations with the Greek state regarding a population exchange between Orthodox Christians of the Aydın province and Muslims of Macedonia/Epirus. The plan for the exchange was aborted when the war started in the summer of 1914. Yet, many Greek communities began to be expelled or had to flee from the coastal zone in the spring of 1914. Rahmi accompanied Talat in his tour of the region to inspect the aftermath of these initial expulsions.

Rahmi was against the Ottoman entry to the world war and pursued an Anglophile policy. In the city, he was favorable to the Levantine communities, most likely if not exclusively in connection with his own economic and social interests. In 1915, he did not seem to be favorable to the deportation of Armenians against orders from the government yet he sent out some limited numbers which would then be halted by the German general Otto Liman von Sanders (1855-1929) in 1916. As such, Izmir along with Istanbul, was one of the leading centers of the empire which did not experience a wholesale deportation of its Armenian community. Yet, in nearby towns, thousands of Armenians were deported.

During his governorship, Rahmi was involved in the urban and social modernization of the city. In the field of education, he worked on a more detailed and standardized inspection system for all the primary schools of the province. Rahmi was also interested in matters of urban and rural security. He took charge of the settlement issues of Muslim migrants coming from the former Ottoman lands in the Balkans and the Aegean. He worked for the infrastructural modernization of the city including the road, water, and sewage systems as well as sanitization. He was also involved in the construction of a building complex for the National Library of Izmir which had been established in 1912. He initiated the construction of a Teachers’ School (Muallim Mektebi) which would later be completed during the Greek invasion of the city (1919-1922) as the Ionian University and would eventually house the Izmir School for Girls (İzmir Kız Lisesi) from 1926.

Armistice and the early republican period↑

After the defeat of the Ottomans in the First World War and the dissolution of its Unionist cadres, Rahmi was among the group of politicians who were exiled to Malta by the British forces. He was not part of the national movement which emerged in Anatolia after 1919. In 1923, the year of the establishment of the republic, he was cited among a group of former politicians who looked into the possibility of a Unionist reconsolidation. Even though this possibility was never realized, he entered the national assembly in 1923 as a member of the Republican People’s Party. In 1926, his name was implicated among a series of former Unionists in the attempt to assassinate Mustafa Kemal (1881-1938) during the latter’s visit to Izmir. After this event, Rahmi escaped to Paris where he lived as an outcast. He returned to Turkey in 1933 and lived there until his death in 1947. 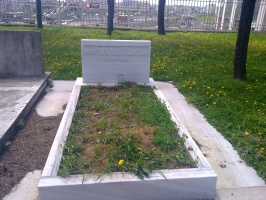