Elisabeth of Bavaria, Queen of the Belgians 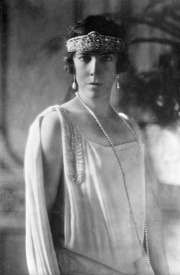 Queen Elisabeth was the third queen of the Belgians. Her attitude during the First World War propelled her to the mythic rank of "Queen Nurse."

Involvement in the War Effort↑

From the first days of the war, the queen remained sided with her Belgian subjects in spite of her family ties. Thanks to her initiative, the royal palace was transformed into a Red Cross hospital: the furniture of the ground floor was replaced by 200 beds, x-ray equipment, and operating theatres. On 20 August 1914, the Germans entered Brussels. The royal family had left the capital three days earlier to rejoin the Belgian army and the king at Antwerp. Owing to bombardments, the king decided to ensure that the royal children were sheltered from the conflict; on 31 August the queen and her children embarked for England. She returned to Antwerp alone on 7 September. One month later the sovereigns abandoned Antwerp to escape its encirclement.

During the journey towards Ostend and then La Panne, the queen handed out chocolates and cigarettes to the troops. Even when the front line was stabilised, she continued to be concerned by the situation of Belgian soldiers until the war’s end. One of her main concerns was the organisation of military ambulances up to the front line and field hospitals. Faced with the extreme violence of the war, with many wounded requiring amputations, the queen decided to set up a hospital in La Panne intended for the severely wounded. A former hotel, Grand Hotel de l'Ocean, was transformed into this Red Cross hospital, managed by doctor Antoine Depage (1862–1925). Other hospitals, such as that of Adinkerke with its surgical section, were also actively supported by the queen. In addition to funding, the queen also paid regular visits to wounded soldiers to console them. Her attitude during the First World War earned her the mythic rank of "Queen Nurse."

Beyond her solicitude for soldiers, Queen Elisabeth’s main concern was with the protection of children. In early 1915 she set up one shelter in Vinckem and then another in Wulveringhem with her own money. These shelters included a school and lodging pavilions for children. The queen visited these orphanages even more frequently than the hospitals. She brought large amounts of delicacies and participated in festivities, such as Saint Nicholas Day, a popular feast for children.

During the four years of war, Queen Elisabeth travelled to England numerous times, where her two sons were living, and several times to Italy to visit her daughter, Marie José. She took advantage of her trips to England to buy furniture to be shared among soldiers, orphans, and the Ocean hospital. She also seized these opportunities to convey messages from King Albert to various British personalities. King Albert used Queen Elisabeth's German origin in 1915 to secretly test Germany via her brother-in-law, Count Hans Veit zu Toerring-Jettenbach (1862-1929), with an eye on a peace agreement of "status quo ante bellum." In addition to all of Queen Elisabeth's work with the war effort, she entertained a series of artists, such as Eugène Ysaye (1858-1931), Emile Verhaeren (1855-1916), and Camille Saint-Saëns (1835-1921), in La Panne.

On 24 October 1918, the sovereigns left La Panne for the castle of Loppem, until the eve of their triumphant return to Brussels on 22 November. The war had ended.

Life after the War↑

Throughout her life, Queen Elisabeth demonstrated a lively interest for the sciences and the arts. A talented amateur photographer, she left behind numerous photo albums of her many trips abroad and of the Great War. She was also a passionate Egyptologist, and she attended the opening of Tutankhamen’s tomb in 1922 with Prince Leopold. Her interest in playing the violin prompted her to found, in 1937, the Concours International Eugene Ysaye (Eugene Ysaye International Competition) and create the Argenteuil musical chapel to welcome its participants. (Since 1951, this competition has been called the Concours Musical International Reine Elisabeth and it is still held annually.) In the 1950s and 1960s, King Albert’s widow surprised and embarrassed the Belgian government with her trips to the Soviet Union and the People’s Republic of China. She died in Brussels on 23 November 1965.

LC Subject Headings
Elisabeth, Queen, consort of Albert I, King of the Belgians, 1876-1965