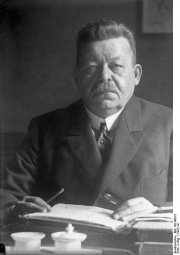 Friedrich Ebert became the most important leader of the SPD during the First World War, alongside Philipp Scheidemann. During the revolution, Ebert rose to the top position within party hierarchy and drew Germany towards parliamentary democracy, first as Volksbeauftragter (people's representative) in the revolutionary government, then in February 1919 as Reichspräsident (president).

Just ten months after Ebert's election, the First World War broke out. The war initially plunged the SPD into severe internal party conflicts and, in 1917, led to the split of the party into the SPD and the USPD (Independent Social Democratic Party). In 1914, the SPD followed almost universally the idea of Burgfriedenspolitik, which meant approving the war credits in the Reichstag and dispensing with fundamental opposition to the monarchical system. However, a growing minority within the SPD, including Haase, was not willing to support this policy. Ebert tried in vain to preserve the unity of the party (dating back to 1875) and to unify the party factions from the left, represented by Karl Liebknecht (1871–1919) to the right, represented by Eduard David (1863–1930).

Career after the Party Split↑

After the party split in 1917, Ebert became parliamentary party leader as well, and he advanced to the top position within the party, surpassing Philipp Scheidemann (1865–1939), who was elected in 1917 to succeed Haase as chairman. It was only during the war that Ebert became a politician of national importance who spoke alongside Scheidemann in the great debates of the Reichstag. Ebert’s policy during the war was by no means frivolous, because all four of his sons were soldiers; two of them, Georg Ebert (1896–1917) and Heinrich Ebert (1897–1917), were killed in 1917.

In the fall of 1918, Ebert pleaded vehemently for SPD participation in the final monarchical government, which was the first one to be formed on a parliamentary basis. Ebert was considered a moderate and pragmatist who was prepared to take on responsibility in parliament. For these reasons, as well as his strained relationship with Scheidemann, Prince Max von Baden (1867–1929) transferred to him the office of Chancellor on 9 November 1918. He gave this office up one day later to become a member of the revolutionary transition government (Rat der Volksbeauftragten).

During the winter of 1918–1919, Friedrich Ebert was the most important policymaker in establishing a parliamentary democracy in Germany. As Reichspräsident, Friedrich Ebert at first rejected the Treaty of Versailles because he did not accept the terms of peace nor that Germany was solely responsible for the outbreak of the First World War. But within a few days he accepted as Realpolitiker, that Germany had to sign the peace treaty.