By 1914 about 100,000 Czechs and Slovaks lived in Russia. The largest Czech and Slovak exile communities had formed in Kiev, St. Petersburg, Moscow, Warsaw, Odessa, Lodz, Kharkov, and Rostov. When the First World War began many of them connected the fight against Austria-Hungary with the hope for the creation of an independent Czech state in the near future. Already in the first days of the war Nicholas II, Emperor of Russia (1868-1918) received a Czech delegation that offered a plan to liberate the Czech lands from the Habsburg government. In particular, a proposal was put forth to organize Czech military formations in the Russian army. Beginning in the autumn of 1914 the political interests of the Czechoslovaks in the Russian Empire were represented by the "Union of Czech (later Czechoslovak) Societies in Russia". The Union aimed to create an independent Czechoslovak state under the aegis of Russia, to organize a 15,000 to 20,000-man Czechoslovak army, and to give all possible support in the war to the Russian government. A Czechoslovak National Council (ChSNS), headed by Tomáš Masaryk (1850-1937), who looked to France and Great Britain for support, was formed in Paris in February 1916 with the goal of furthering the fight for the creation of an independent state. The Paris ChSNS was recognized as the leading political organization at the Second Congress of the Union of Czechoslovak Societies in Russia, held in Kiev from 25 April to 1 May 1916. Russophile monarchists tried to dispute this decision and create their own associations but were unsuccessful. After the fall of the Russian monarchy, the Provisional Government decided to create a branch of the ChSNS in Russia. Its leaders were Bohdan Pavlů (1883-1938) and P. Maksa. The Union of Czechoslovak Societies in Russia was preserved, but as a subordinate structure.

By 8 August 1914 Minister of War Vladimir Aleksandrovich Sukhomlinov (1848-1926) had signed an order, "The Formation of Special Czech Military Volunteer Units". Soon a "Czech Volunteer" battalion, headed by Russian officers, began to be formed in the Kiev Military District. General Nikolay Aleksandrovich Khodorovich (1857-1936), Chief of Staff of the District, oversaw the organization of the battalion, and Lieutenant Colonel Lototskii was appointed commander of the battalion. As a result of signing up volunteers, as of 10 September 1914 the Czech detachment numbered twenty-one officers (six of them Czech), 921 enlisted men, and 149 non-combatant ranks.

The Czech troops took an active part in the offensive battles for Galicia. The command often used the Czechs, who knew German well, as scouts and agitators. The Czech troops conducted a fighting retreat from Galicia in the spring and summer of 1915 together with other formations of the Russian army. The detachment was then sent to the Southwest Front to fight in the 3rd Army, where it was divided into independent companies and platoons that were attached to various corps and divisions.

The Jan Hus 1st Czechoslovak Rifle Regiment was formed in December 1915. One of its battalions was deployed on the Northwest Front and the other on the Southwest Front. In January 1916 Nicholas II decreed that the Czechs and Slovaks in the Russian army were to receive equal rights with the rest of the servicemen.

On 6 April 1916 an order was issued relating to the formation of a Czechoslovak Rifle Brigade. The 1st and 2nd battalions were turned into regiments, which received the unofficial names "St. Vaclav" and "Kirill and Mefodiy". Colonel Viacheslav Platonovich Troianov (1875-1918) headed the brigade. In the summer of 1916 the brigade numbered 2,436 servicemen, one-third of whom were Russian officers and enlisted men. Units of the brigade were transferred to various formations of the 3rd Army (the Western Front) and to the 7th, 8th, 9th, and 11th Armies (the Southwest Front).

In the spring and summer of 1916 many Czech and Slovak soldiers participated in the famous Lutsk (Brusilov) breakthrough against the Austro-Hungarian forces. General Aleksei A. Brusilov (1853-1926), the Commanding General of the Southwest Front, later noted the excellent combat work of the Czechoslovak riflemen in his memoirs.

A Czech company (150 soldiers) joined the Kornilov Shock Regiment (part of the 8th Army). A considerable number of soldiers in the Czechoslovak Rifle Brigade (three regiments, about 3,580 officers and enlisted men) participated in an offensive operation in Galicia in June 1917 in the 49th Corps of the 11th Army. Later, units of the Brigade covered the hasty retreat of the Russian troops on the Southwest Front from Tarnopol.

On the order of General Nikolay Nikolayevich Dukhonin (1876-1917), Chief of Staff of the Southwest Front, the 1st Czechoslovak Rifle Division - called the "Hussite" in honor of the Czech national hero Jan Hus (c.1369-1415) - began to be formed on 1 August 1917. A First Czechoslovak Artillery Battalion was also formed, in addition to the seven batteries that were reinforced by field guns transferred from the Southwest Front.

On 26 September 1917 General Dukhonin ordered an independent Czechoslovak corps consisting of two divisions and a reserve brigade to be formed in Kiev. General Vladimir Nikolaevich Shokorov (1868-1940) was put at the head of the corps, and General Mikhail Konstantinovich Diterikhs (1874-1937) was named Chief of Staff.

In the February Revolution Czechoslovak riflemen dressed in Russian military uniform began to emphasize their national identity by wearing red-and-white ribbons on the bands of their service caps, cockades with a depiction of a lion on them, and the letters "Ch" and "S" on their shoulder-boards.

The Czechoslovak Legion after the Bolsheviks Came to Power↑

When the Bolsheviks came to power in October 1917 the leadership of the ChSNS branch in Russia initially declared its support for the Provisional Government, which had been overthrown, and concluded an agreement for joint operations with the commanders of the Kiev Military District and the Southwest Front. At the end of October 1917 some units of the corps, together with cadets from the military school, participated in street battles in Kiev against supporters of Soviet power. The clashes continued until a cease-fire was established.

The ChSNS branch in Russia also concluded an agreement with the government of the Central Rada (the Central Council of Ukraine), which promised not to obstruct the evacuation of the corps in the event that Ukraine left the war. The agreement was in effect until January 1918, when the Central Rada declared itself ready to sign a peace treaty with Germany and its allies.

When the Soviet government concluded an armistice with the Central Powers in December 1917 the leadership of the ChSNS, interested in continuing the war, began talks with French President Raymond Poincaré (1860-1934). As a result, the French agreed to consider the Corps a unit of the French army and to finance all necessary expenses for its maintenance. New disciplinary and garrison regulations modeled on the French army were introduced into the corps.

To get to France the Corps was to take the Trans-Siberian Railway to Vladivostok, then travel by ship to the Americas, and then on to Western Europe. By agreement with Vladimir Aleksandrovich Antonov-Ovseenko (1883-1939), the Commanding General of Soviet Forces in the South, the Czechoslovak riflemen were to hand over some of their weapons to the Soviet authorities. Each regiment was left with twelve Maxim machine guns and twelve Colt machine guns, in addition to their rifles; each division retained one battery consisting of two field guns and a suitable quantity of ammunition and carriages.

The combination of demoralization from the war and the revolutionary ferment in the air seized a number of units of the Corps in October and November 1918. Elected company, battalion, and regimental committees had operated in the Corps since the February Revolution. Some regiments had refused to obey the orders of commanders to take up positions at the front. The decline of discipline was connected with important political events: the proclamation of the Czechoslovak Republic on 28 October 1918 and the end of the First World War.

The Allied command’s plan to use the Czechoslovak legionaries to support Alexander V. Kolchak's (1874-1920) forces turned out to be unrealistic. Sentiments prevailed in the Corps in favor of an immediate evacuation to Western Europe. On 13 November 1919 a memorandum addressed to the diplomatic representatives of the Allies in Siberia appeared in the newspaper Cehoslovensky Dennik. Signed by B. Pavlu and Václav Girsa (1875-1954), leaders of the ChSNS branch in Russian, the article accused Kolchak’s regime of mass terror. It noted that the officers and enlisted men of the Czechoslovak troops had no relationship to Kolchak, as they strictly held to the principle of non-interference in Russian affairs.

On 27 December 1919 the Allied command ordered the legionaries in Nizhneudinsk to capture the train on which the former Supreme Ruler Alexander V. Kolchak and a considerable part of the gold reserves of Russia were traveling. The Czechoslovak command subsequently handed over Admiral A. V. Kolchak, Viktor Nikolaevich Pepeliaev, the Prime Minister of Kolchak’s government, and Russia’s gold reserves to the local authorities in exchange for free passage to the Transbaikal. A cease-fire between the Czechoslovak command and representatives of the Soviet government was signed at the Kuitun station on 7 February 1920.

The evacuation of the last Czechoslovak formations from Vladivostok on American and British ships was completed on 2 September 1920. A total of more than 56,000 servicemen, 6,000 civilian Czechoslovak subjects, and 2,000 women and children left Russia.

Memorials to the Czechoslovak Legionaries↑

Monuments to fallen legionaries were built in the locations where soldiers were buried en masse during the Civil War. However, they were almost all destroyed when Soviet power was established over the regions.

The monument in Prague, created by sculptor Josef Mařatka (1874–1937) and unveiled in 1932, is the best-known memorial to the legionaries. The monument is a 16-meter granite obelisk with seven figures of Czechoslovak legionaries in various uniforms surrounding it: four in French; two in Russian; and one in Italian. Next to the legionaries is another figure, a woman decorating the legionaries' banner with a wreath of leaves. On the monument is an inscription, "Prague to the Sons of Victory", and a list of locations of the Czechoslovak soldiers’ military victories. The monument was destroyed during the German occupation, but after the Velvet Revolution of 1989 the new authorities in Czechoslovakia decided to rebuild the monument. Its new unveiling was held in October 1998.

Monuments to the Czechoslovak legionaries were erected in Krasnoiarsk (2006), Buzuluk (2007), Ekaterinburg (2008), Nizhnii Tagil (2009), Cheliabinsk (2011), and Kungur (2012) at the initiative of the governments of the Czech Republic and Slovakia and with the support of the Russian regional authorities and the public. In 2006 the monument at the old cemetery in Vladivostok to the Czechoslovak soldiers, which had been partially preserved from the time of the Civil War (1918), was repaired. 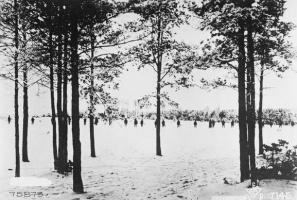