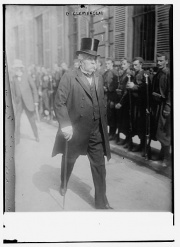 During the war, Georges Clemenceau fought for a more efficient war effort and for parliamentary control of military affairs and, as a journalist, rejected unlimited censorship. As French premier, he embodied the “integral war” and the struggle for victory. Once the armistice had been signed, the “Père la Victoire” signed a compromised peace that placed France at the center of European politics.

Former French premier Georges Clemenceau (1841-1929) thought, after the outbreak of war, that he would be chosen by Raymond Poincaré (1860-1934) to be the head of government, despite their personal antipathy. That was not the case and, at the end of August 1914, propelled by his deep patriotism, he became a powerful critic of the government and the military authorities in his newspaper, “L’Homme Libre”. After having denounced, in his paper, the incapacity of the army to take care of the wounded soldiers, his paper was suspended in October 1914. Clemenceau denounced the suspension by transforming his newspaper’s name into “L’Homme enchaîné”: for him, the scope of censorship should have been limited to solely military affairs.

In November 1915, he became the president of the army and the foreign affairs commission of the senate and tried to exercise parliamentary control over military affairs to achieve a more efficient war effort. His criticism made him popular while visiting the trenches.

His speeches played an important role in the overthrow of Alexandre Ribot's (1842-1923) government in September 1917. In the context of an internal crisis, both popular and military, Clemenceau was appointed “president of the council” on 16 November 1917.

“Domestic policy, I wage war. Foreign policy, I still wage war” was Clemenceau’s motto. Clemenceau fought against pacifism and put high-up political figures accused of seeking a negotiated peace, such as Louis Malvy (1875-1949) and Joseph Caillaux (1863-1944), on trial. Supported by a strong parliamentary majority, he tried to rally the country at a decisive moment, especially in June 1918 when the German offensive threatened Paris. In order to support an “integral war”, he facilitated inter-Allied economic cooperation and promoted the unification of the supreme command. He accepted the request for peace and an armistice from the Central Powers in October 1918 to spare French lives. This puts him in contrast with Poincaré, who would have preferred a surrender in Berlin.

Contrary to the legend, Clemenceau was well aware that the victory was one of a coalition. He knew that President Woodrow Wilson (1856-1924), whose Fourteen Points had been accepted as the legal basis for the future peace (the “pre-armistice agreement” of 5 November 1918), had strong supporters in Europe. At the Peace Conference of 1919, his goals were to maintain the security of France by restraining German power in Europe and to restore France through economic cooperation with western democracies, particularly with the Anglo-Saxon powers. But, obliged to compromise with Wilson and David Lloyd George (1863-1945), who offered him a defensive alliance, he accepted the Wilsonian League of Nations and obtained the return of Alsace-Lorraine, the coalfields of Saarland and the occupation of Rhineland for fifteen years linked with the payments of the reparations. He suffered much criticism after the signature of the Treaty of Versailles, for having accepted too mild clauses in the treaty, for having “lost the peace”. He retired from political life in January 1920 after having lost the presidential election. 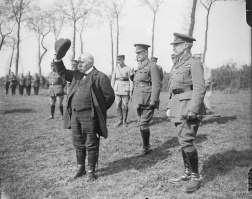