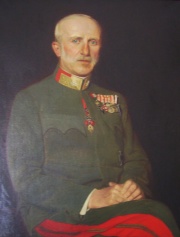 Count Heinrich Karl Clam-Martinic was a German-speaking Bohemian high aristocrat and close friend to heir apparent Archduke Franz Ferdinand. Under Emperor and King Charles I, Clam-Martinic was Austrian (Cisleithanian) prime minister from 1916 to 1917 and Austro-Hungarian military general governor in Montenegro from 1917 to 1918.

Count Heinrich Karl Clam-Martinic (1863–1932) was a German-speaking, traditionalist Bohemian high aristocrat, born into a family who had served the Habsburg emperors for centuries. He was nephew and heir of Count Heinrich Jaroslav Clam-Martinic (1826–1887), who was - as leader of the clerical-feudal faction and cofounder of the alliance between the Bohemian aristocrats and liberals — one of the most illustrious Bohemian politicians of the 19th century. Heinrich Karl Clam-Martinic was a close friend of the Austro-Hungarian heir apparent Franz Ferdinand, Archduke of Austria-Este (1863–1914); Clam-Martinic accompanied Franz Ferdinand on his journey around the world from 1892 to 1893.

Reserve Officer and Politician in Prague and Vienna↑

After a first law degree from the University of Prague, Clam-Martinic began his military career as a one-year volunteer (Einjährig-Freiwilliger) for the Bohemian Dragoon Regiment No. 2 in 1883. He finished his active service as a first lieutenant (Oberleutnant) of the Austrian (Cisleithanian) Landwehr (territorial army) in 1892. Two years later, the feudal-conservative landowner Clam-Martinic was elected to be a member of the Bohemian Landtag. In 1902 he was appointed as a life peer in the Austrian House of Lords (Herrenhaus), where he was the spokesman for heir apparent Franz Ferdinand.

After Franz Ferdinand’s assassination in 1914, Clam-Martinic volunteered for military service and was transferred to the Galician front. He earned an extraordinary promotion to captain (Rittmeister) and assumed command of a field company in the Balkans at the end of 1915, where he took part in the conquest of Serbia and Montenegro. In May 1916 Clam-Martinic’s unit was transferred to the Italian front. There, he fell ill and resigned from active service.

Upon his return to Vienna, Clam-Martinic advocated the controversial reconvention of the Cisleithanian parliament, which had been suspended in 1914. Behind the scenes, he also supported a return to the peaceful status quo ante bellum. In November 1916, Clam-Martinic was appointed Austrian minister of agriculture in the cabinet of Ernest von Koerber (1850–1919), who shared Clam-Martinic’ plans for the Reichsrat. Further, Clam-Martinic’s appointment would appease the radical Czechs. After the death of Francis Joseph I, Emperor of Austria (1830–1916) and Charles I, Emperor of Austria’s (1887–1922) succession, Clam-Martinic himself became Austrian prime minister on 20 December 1916. A few days later his friend Ottokar Graf Czernin (1872–1932) became foreign minister.

Clam-Martinic’s premiership was troubled. His most important political action was the reconvention of the suspended Reichsrat. But in the Cisleithanian parliament, the hesitant prime minister met an unresolvable deadlock between the German and the Slavic - especially Czech—nationalists. The radical Germans rejected Clam-Martinic’s supranational, conservative programme as insufficiently pro-German, while the Czech - and other Slavic—nationalists blamed him for betraying their trust by postponing and ultimately not following through on promises. Further, Clam-Martinic and his highly influential Hungarian counterpart, Prime Minister István Tisza (1861–1918), shared a reciprocal antipathy, which mirrored the clash of interests between the two halves of Austria-Hungary regarding war aims and the general character of the Habsburg Empire. Thus, Clam-Martinic had no room to manoeuvre; he resigned on 22 June 1917.

Two days after his resignation from the Premiership, Clam-Martinic was promoted to colonel (Oberst), and on 8 July 1917 he was appointed military general governor in Montenegro. The professional officers in Montenegro were sceptical of the reservist Clam-Martinic. Indeed, he never became a plain military administrator of Montenegro; he always remained a politician favouring political over military solutions.

Altogether, the first half of Clam-Martinic’s command in Montenegro was successful within his limited options. For example, he negotiated the surrender of Radomir Vešović (1871–1938) in late December 1917. Since June 1916, the Austro-Hungarian military and gendarmerie had failed to arrest or kill this former Montenegrin minister of war and supposed leader of the Montenegrin insurrection. But his memoranda regarding the South Slav and Albanian questions were far from popular. He lobbied to federalise Austria-Hungary or at least the creation of a South Slav body within the Habsburg Empire, based on decades-old ideas championed by heir apparent Franz Ferdinand’s and Emperor Charles' reform-oriented retinue. These actions were much disliked in Budapest and unheard of in Vienna. Also in situ, Clam-Martinic failed to find durable solutions for the tensions between the ethnic Serbs and ethnic Albanians under his jurisdiction.

In early 1918, Clam-Martinic was inducted into the Order of the Golden Fleece and promoted to major-general (Generalmajor). Meanwhile, the Montenegrin guerrilla movement, despite Vešović’s surrender, gained ground and the overall situation in the occupied Balkans noticeably worsened. In September 1918, the Hungarian Prime Minister Sándor Wekerle (1848–1921) prevented Clam-Martinic’s appointment as imperial minister of finances because Clam-Martinic’ plans for the South Slavs were unacceptable to the Hungarian government. Further, Clam-Martinic was, like Franz Ferdinand, known for his anti-Hungarian attitudes.

On 13 October 1918, after the abolishment of the military general government by the Armeeoberkommando, Clam-Martinic left Montenegro with his personal belongings and accompanied by his Czech valet. His political career ended with his last speech in the House of Lords in Vienna, where he solemnly declared his loyalty to the Habsburg dynasty.

With the collapse of Austria-Hungary, Clam-Martinic lost his titles. With the Czechoslovak Land Control Act of April 1919, he also lost most of his huge Bohemian property and sold the remainder. Until his death in 1932, he lived on his Austrian goods and was president of the Union of Catholic Noblemen in Austria (Vereinigung Katholischer Edelleute in Österreich). Clam-Martinic married Anna von Abensperg-Traun (1875–1956) in 1895, and the couple had no children. The couple adopted Clam-Martinic’s nephew, Georg Clam-Martinic (1908–2000), who inherited the remaining family property. 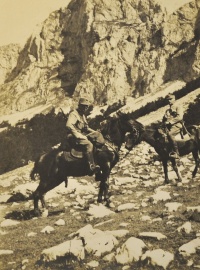