Churchill was Navy Minister during the early stages of the war but was widely criticized over his handling of the Dardanelles campaign. He was demoted and soon afterwards resigned from the government in order to serve on the Western Front. He quickly returned to politics and then to ministerial office.

Winston Leonard Spencer Churchill (1874-1965) is best known for having served as British Prime Minister during World War II. However, he also fulfilled important political and military roles during the First World War. This was one of the toughest phases of his career, but also a formative one. During this period Churchill played an important role in major events, which, in the case of the Dardanelles campaign, cast a shadow over his reputation.

At the outbreak of war, Churchill held office as First Lord of the Admiralty in Herbert Henry Asquith’s (1852-1928) Liberal government – the latest in a succession of ministerial posts he had held since 1905. Having originally been elected to Parliament as a Conservative, he had subsequently switched parties. His defection meant that he was widely distrusted by his former colleagues, a fact that would have important consequences for his wartime career. In 1914 he was still relatively young and extremely energetic, and he admitted that he relished the prospect of war.

However, Churchill’s initial experiences were frustrating, as the Royal Navy had the relatively passive role of enforcing the blockade of Germany. His taste for drama – earlier seen in his involvement as a young man in minor imperial wars - led him to take personal charge of the defence of Antwerp, which led him to be widely ridiculed. He also concerned himself with operational minutiae, which caused resentment within the Admiralty. Historians still debate his effectiveness; Christopher M. Bell has shown that the earlier criticisms made by Stephen Roskill were exaggerated.[1] It is nonetheless true that Churchill’s behaviour was erratic and that poor judgement contributed both to his strategic mistakes and to his own (temporary) political downfall.

Early in 1915, the stalemate on the Western Front led the Allies to cast around for a means of making a breakthrough elsewhere. The result was the naval campaign at the Dardanelles and the landings at Gallipoli that followed. It should be noted that the original idea was not Churchill’s, and that the Cabinet as a whole supported it. He was, however, an enthusiast for the project and he held an overly optimistic view about the prospects of its success. The episode must be seen as one of collective rather than purely individual failure, albeit one in which Churchill himself played a very important part.

The failure at Gallipoli was not the immediate cause of Churchill losing the Admiralty. Rather, it was the breakdown of his relationship with the First Sea Lord, Admiral John Fisher (1841-1920), that triggered the crisis that led to the creation of the Asquith Coalition. As the price of their participation in government, the Conservatives insisted that Churchill be moved. He was given a minor Cabinet post as Chancellor of the Duchy of Lancaster, but in November 1915 he resigned to take up a command on the Western Front. From January to May 1916 he commanded the 6th Battalion of the Royal Scots Fusiliers, with the temporary rank of Lieutenant-Colonel. He served in a quiet sector but demonstrated his ability as a leader of men. His heart remained in politics, however, and he returned to London with the hope of regaining office at a time when Asquith’s effectiveness was increasingly being called into question.

When a new coalition was formed under David Lloyd George (1863-1945) in December 1916, Churchill was not offered a job, to his great shock and resentment. It was some months before the Prime Minister felt politically strong enough to appoint him as Minister of Munitions. This post was outside the War Cabinet, and therefore Churchill was still excluded from the higher direction of the war. He did, however, prove a highly effective administrator, and – although he had not lost his zest for visits to the front – his behaviour was more stable and less unpredictable than it had been previously. The experience of failure had scarred him, but also led him to demonstrate a greater political maturity. After the Armistice, Lloyd George rewarded him with important Cabinet roles in his post-war coalition, leading him to play a significant role in the reconstruction period.

Churchill would later play a significant part in the construction of wartime memory with the publication of his multi-volume history-cum-autobiography, The World Crisis (1923-1931). Unlike much subsequent writing on the war, this book avoided a narrow focus on the Western Front. Churchill rejoined the Conservatives and served as Chancellor of the Exchequer in 1924-1929. He was out of office during the 1930s but became First Lord again on the outbreak of war in 1939. He served as Prime Minister in 1940-1945 and 1951-1955 and was celebrated as a national hero at the time of his death. 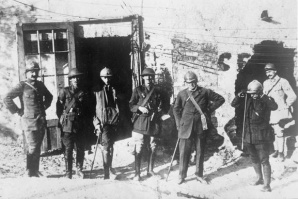 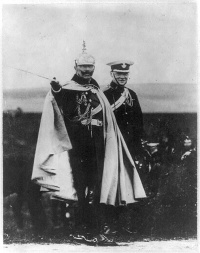