Chetnik is a common name for a member of the auxiliary or paramilitary units used by the Serbian army for guerrilla warfare during the Great War. The chetnik tradition dates from the time of struggle against the Ottomans; their legacy continued to be present in all subsequent conflicts.

Chetniks is the colloquial name for members of Serbian irregular units that were active in all conflicts during the 20th century. These units originated in the period of Serbian military-political action in Ottoman Macedonia as rivals of the comitaji’s of the Bulgarian Internal Macedonian Revolutionary Organization (IMRO) that was active between 1903 and 1912. Chetnik means a member of a cheta. The term cheta comes from word četovanje which means guerrillla activities, or fighting in small units. Their leaders were known as voivods.

At first chetnik action was private enterprise. It was preceded by the formation of the Serbian Committee, which was founded in 1903 by several politicians, entrepreneurs and officers mostly from Ottoman Macedonia and the Sanjak and Kosovo regions. The idea was to send small units of chetniks across the border to organize inhabitants of pro-Serbian areas and villages in Ottoman Macedonia and to oppose comitaji bands from the rival IMRO, which were involved in similar activities on the Bulgarian side. After initial failure, this initiative gained official support from a special board of the Ministry of Foreign Affairs. In addition to those designated to go across the border, young officers and NCO’s greatly contributed to military training and the preparation of chetniks. University and high school students, volunteers from Austria-Hungary and Montenegro, members of Gendarmerie and Border troops, Macedonian refugees and seasonal workers in Serbia, as well as local Macedonian peasants also participated. In time a secret organization, Unification or Death (Ujedinjene ili smrt), better known as the Black Hand (Crna ruka) influenced chetnik action. The Black Hand greatly influenced the Serbian military, patriotic organizations, and the ruling dynasty; the leadership of the Black Hand consisted of officers responsible for the coup d’etat in 1903 and officers who were active in choosing the Karadjordjević dynasty to rule. Many of the Black Hand members actively participated in chetnik action.[1]

During the Balkan Wars some 2,000 chetniks fought within the ranks of the Serbian army. They were grouped in ten detachments and given the task of performing reconnaissance missions or creating diversions on the enemy’s back lines.[2] During combat activities and in their immediate aftermath some chetnik leaders and their detachments committed atrocities against Albanian, Muslim (Turkish), and pro-Bulgarian inhabitants of Macedonia, Kosovo, and Metohija.[3]Chetniks were considered to be efficient tools in eliminating Bulgarian power and spreading Serbian influence in Macedonia, both by suppressing activities of rival IMRO bands and by physically liquidating prominent IMRO activists and supporters.

These same tactics were implemented during the Great War, albeit with rules of engagement. The Serbian Supreme command had organized four chetnik detachments with about 2,250 members. In addition to reconnaissance missions and creating diversions on the enemy’s back line, they were prepared to organize uprisings in areas with Serbian majorities if the offensive was successful. In case of an enemy offensive they were supposed to stay at the enemy’s rear and create diversions or form special terrorist groups to attack enemy headquarters or assassinate enemy commanding officers. Former chetniks as well as physically and mentally suitable volunteers were eligible for service in chetnik ranks.[4]

During the Serbian retreat in the winter of 1915-1916, chetniks were assigned military police duties such as maintaining order and preventing and punishing desertions. On the Macedonian front they were grouped into Volunteers detachment, which suffered huge casualities during the battle of Kajmakčalan, after which the remaining men were dispersed among regular units. The only remaining chetnik detachment on the Macedonian front was that under Jovan Babunski (1878-1920), which operated under French command.[5] During the Toplica uprising in Serbia in 1917 insurgents used to call themselves chetniks and were even led and organized by several chetnik veterans.[6] 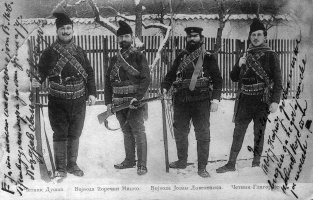