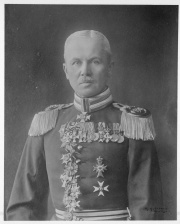 Friedrich Bronsart von Schellendorf was a Prussian-German lieutenant general. As Chief of Staff of the Ottoman Army, he was one of the closest collaborators of Enver Pasha during the First World War. In this role, he was also involved in the Ottoman measures against the Armenians, which resulted in a genocide.

Military Career Before the Outbreak of War in 1914↑

Friedrich Bronsart von Schellendorf (1864-1950) came from an East Prussian officer family. His father Paul Bronsart von Schellendorf (1832-1891) officiated between 1883-1889 as Prussian Minister of War and his uncle Walter Bronsart von Schellendorf (1833-1914) held this office between 1893-1896. Educated in the cadet corps, Friedrich Bronsart Schellendorf began his military career in 1882 in the Potsdam 1st Garde Regiment zu Fuß. After graduating from the War Academy, he was employed in several general staff positions. He gained experience in war and abroad during the Russo-Japanese War of 1904/05, when he accompanied the Japanese army as a military observer during the campaign in Manchuria for half a year. From 1908 to 1912, he served as a department chief in the General Staff, where he was promoted to colonel in 1911. From October 1912 to December 8, 1913, he was commander of the prestigious Grenadier Regiment "Königin Olga" (1st Württembergisches) No. 119 in Stuttgart.

Role during the Armenian Genocide↑

After the war, Bronsart von Schellendorf became division commander in Frankfurt/Oder, and retired in September 1919 as a lieutenant general. From 1926, he worked as chairman of the Tannenbergbund, an umbrella organisation of völkisch-nationalist associations, which was aligned to the allegiance of Erich Ludendorff (1865-1937). Bronsart von Schellendorf's unpublished memoirs, written in 1934-1938, reflect his affinity to National Socialism and his antisemitism at that time. His papers are in the Bundesarchiv-Militärarchiv in Freiburg im Breisgau.