When Latvia felt endangered by the Bolsheviks they called for German help, since Germany had assisted in clearing the country from the Bolsheviks before. However, very soon tensions between the Latvians and their helpers became apparent and the Allies decided that the “Baltische Landeswehr” should come under the British command.

After the November Revolution of 1917 the Bolsheviks came to power in Russia, but were confronted with two problems: they had to defeat the “white” counter-revolutionary forces and repel an Allied intervention. At the same time they had strong aspirations to export their revolution to other countries – and therefore started to deploy their forces to the West, threatening Ukraine, Poland and the Baltic States. Since the Baltic States were occupied by the Germans, Kārlis Ulmanis (1877-1942), head of the Provisional Government of Latvia, asked for German help. The Germans provided war materials and foreign volunteers obtained Latvian citizenship.

The Baltische Landeswehr (Baltic Territorial Army) was originally supposed to have eighteen companies. However, they did not have enough local volunteers and instead filled the ranks with Germans. The attempt to attract soldiers from the Scandinavian countries also failed.

On 1 February 1919 Major General Rüdiger von der Goltz (1865-1946) became commander of all German troops in the region. Upon his arrival, the Bolsheviks occupied most of Latvia and were approaching Liepaja, which was defended by remnants of the former German 8th Army, known as the “Iron Brigade”. Although the Baltische Landeswehr existed, it was still a small force that had not yet reached its full potential.

The Germans attacked and managed to capture Kuldiga. Von der Goltz aimed to conquer all of Courland, as he thought this was the best way to protect Eastern Prussia against the Bolshevik threat. On 3 March 1919 the German forces launched a major offensive, Operation “Tauwetter” (Operation Thaw). The Baltische Landeswehr began its operation on 13 March and proceeded to the north, where they captured Jelgava. They did not coordinate their attack with von der Goltz, but it was still successful and the losses were not heavy (seven officers and thirty-seven enlisted personnel).

The success in Courland, however, made the situation more complicated; after the Bolshevik threat disappeared, the Latvians were worried about becoming a German colony. In April 1919 the Germans overthrew the Latvian government and inserted Andrevs Niedra (1871-1942) as Prime Minister. Meanwhile Ulmanis left for Estonia. The Entente powers became concerned about the situation.

Nevertheless, the operations continued and Riga was chosen as the next target. The attack started on 23 May 1919, when the Baltische Landeswehr crossed the swamps and cut off the Bolsheviks’ retreat route. Because the Red Army had concentrated most of its forces in the southern region, leaving the Daugava line with weaker defenses, the Baltische Landeswehr was able to capture Riga.

General Rüdiger von der Goltz allowed his soldiers to join the ranks of the “West-Russian Volunteer Army”, which was commanded by Prince Pavel Bermondt-Avalov (1877-1974). The German unit within Avalov’s force was known as the “Deutsche Legion” (“German Legion”). In December 1919 the “Deutsche Legion” was disbanded after it was defeated by the Latvians and was forced to withdraw into East Prussia.

In the early phases of the Latvian war for independence German and Baltic-German support for the Latvians was crucial. However, the Germans were more interested in building a German zone of influence in Latvia than in helping the Latvians to gain independence. This led to an open conflict with Ulmanis’ government, resulting in Ulmanis expelling the Germans from Latvia. Without German support, the Baltic-Germans were unable to dominate the Latvians, who were supported by Great Britain. The Baltische Landeswehr ultimately ended up under British command. 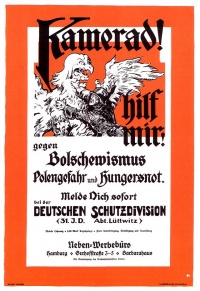