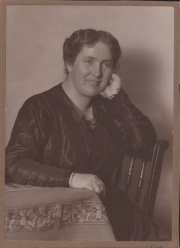 Züblin-Spiller, Else
Initiator of non-alcoholic catering for the troops
Born 01 October 1881 in Winterthur-Seen, Switzerland
Died 11 April 1948 in Kilchberg, Switzerland

In the context of the Swiss organisation Schweizer Verband Soldatenwohl Else Spiller initiated facilities for soldiers providing alcohol-free catering (Soldatenstuben) and organized social support for families of needy soldiers (Wehrmannsfürsorge), a precursor of the federal law on income compensation for military service (Lohn- und Verdienstsersatzordnung) founded during the Second World War. She is considered a pioneer of social work and staff canteens.

After the outbreak of the First World War, Switzerland lacked any measures to cope with the social consequences of war and troop mobilisation. Women’s associations played a central role in organising social safety nets. Essential information as regards the contributions of women may be found in a study by Regula Stämpfli (2002); Jakob Tanner has published a study (1999) on the organisation of alcohol-free catering; and Bernhard Ruetz summarises the 100-year history of the canteen organisation SV Group in his 2014 book.

The journalist and autodidact Else Spiller (1881-1948) felt an association with the Salvation Army and the temperance movement. Before the war, her travel reports about slums in large cities in Europe received attention. With fundraising for needy children ("Kinderhilfstag"), organised in 1911, following the Danish example, she extended her excellent network of political and business contacts which, after the outbreak of war, she used for the Schweizer Verband Soldatenwohl. Under her operative leadership, the Schweizer Verband Soldatenwohl quickly advanced; it became a vital actor in supplying the troops with food. By negotiating with representatives of the military leadership and federal government in Bern, she managed to immediately set up "soldiers’ rooms". These so-called "Soldatenstuben", established in schools, workshops and barracks – and relocating according to the needs of the military troops – multiplied rapidly: by the end of war, approximately 1,000 canteens had been established. However no more than 180 ever operated simultaneously. The canteens were always managed economically by salaried "soldiers’ mothers". In order to get women from influential circles involved and raise money, Spiller added women’s sub-committees to the organisation. The cooperation with charitable women’s groups on the local levels, was, however, just as important.

The success of the alcohol-free Soldatenstuben which was extraordinary in international comparison, was due, on the one hand, to the fact that Switzerland was spared from the war and therefore lacked any army catering institutions as well as, on the other hand and just as importantly, to Else Spiller’s negotiating skills. Unlike the temperance movements in the large belligerent countries, she did not place alcohol-free troop catering in the foreground (although she, too, aimed at it) as it met broad criticism within the army; instead, she focused on the image of the caring mother. With the Soldatenstuben she reinforced the topos of the vigilant soldier protecting his country, his people and his family, but in need of feminine support and recognition in the male world of border occupation. This topos was popularised as early as 1917, in the song "La Petite Gilberte de Courgenay" by Hanns In der Gand (1882-1947). The famous and widespread song related the story of a young innkeeper’s daughter in the Jura who charmingly attended to distressed soldiers. During the Second World War and in the context of the intellectual defence of the homeland ("Geistige Landesverteidigung"), the story in the song served as the model for a film in 1941 by Franz Schnyder (1910-1993).

In 1916, the Schweizer Verband Soldatenwohl also began to organise for the underwear of soldiers without family to be washed and organised support and care for families of needy soldiers whose hardship became known to the organisation’s leaders through the managers of the Soldatenstuben, local women’s committees or troop commanders. At the so-called "Wehrmannsfürsorge" (Aid for Soldiers) inspired by Spiller, salaried female welfare workers tended to a growing number of cases. Families were supported financially and, also, through the provision of contracts for home-work for the women. All in all, approximately 35,000 families received almost 5 million Swiss francs between 1916 and 1920, with most of the money coming from the national "Frauenspende" (Women’s Donation) and its successor organisation "Nationalspende" (National Donation). The Women’s Donation had been launched shortly after the outbreak of the war as the women’s contribution to the costs of military mobilisation. It was incorporated into the Armed Forces Staff together with the "Wehrmannsfürsorge" in 1917, and was replaced the following year by the National Donation, which was set up according to the same pattern – the first all-Swiss campaign for people in need.

Finally, in autumn 1918, the Schweizer Verband Soldatenwohl was ordered by the military command to set up emergency hospitals, within a very small amount of time, for soldiers who had come down with influenza. In the heated atmosphere of the national strike in November 1918, Spiller and her organisation were perceived by the strikers as an extended arm of the military and an ally of the Zurich entrepreneurs.

Owing to war-induced inflation the Schweizer Verband Soldatenwohl had already cooperated with factory owners in the last year of the war in order to supply low-cost meals for workers. Through the quick introduction of factory canteens, the Soldatenstuben women were able to avoid being "demobilised". In 1920, the organisation was renamed as Schweizer Verband Volksdienst (SVV). Under the management of Spiller, it established a rapidly growing number of alcohol-free staff canteens, modelled after the Soldatenstuben. Spiller was also inspired by American concepts. As a member of the SFUSA (Swiss Friends of the United States) she had travelled to the U.S. in 1919. That was where she met her future husband Ernst Züblin (1876-1949) whom she married in 1920. Her organisation is, today, one of the ten biggest business caterers in Europe. 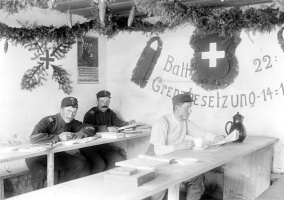 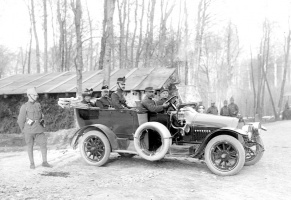 Else Spiller at the border 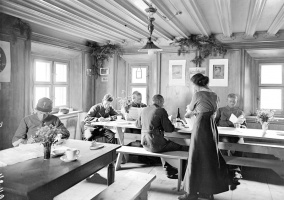 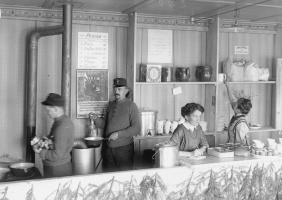 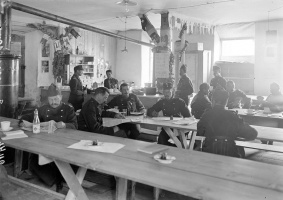 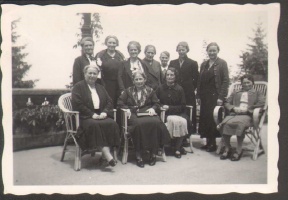 Else Züblin with Soldiers' mothers from the First World War 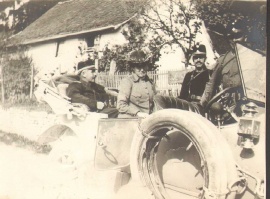 Else Züblin-Spiller in the Jura