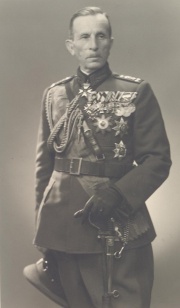 Nikola Zhekov was a Bulgarian infantry general, the Bulgarian minister of war from August through October 1915, and commander-in-chief of the Bulgarian army during the First World War, from 1915 to 1918.

Family Background and Military Service before the First World War↑

Nikola Zhekov (1865–1949) was the eldest son in a Bulgarian merchant family. He received basic education in his hometown, Sliven, and later he graduated from the Academic High School for Boys in Sofia. In 1883, Zhekov enrolled in the Military School in Sofia. He volunteered and served in the Serbo-Bulgarian War of 1885. In 1898 he graduated from the Italian Scuola di Guerra, the military academy in Turin, Italy. Starting in 1901 Zhekov gave lectures at the Military School in Sofia and became its director in 1912. During the First Balkan War in 1912, he served as the Second Bulgarian Army’s chief of staff. After the Balkan Wars Zhekov became the deputy chief of staff for the Bulgarian army, and he was also the commander of the 8th Infantry Division.

In August 1915 Zhekov became minister of war, as the country worked its way towards entering the First World War[1] on the side of the Central Powers. Bulgaria and Serbia had waged war with one another twice before: the Serbo-Bulgarian War in 1885 and the Second Balkan War in 1913. In the latter conflict, Bulgaria suffered territorial losses, which led them to enter the First World War on the Central Powers’ promises of regaining said territory. With the declaration of war against Serbia in October 1915, Zhekov was appointed commander-in-chief of the Bulgarian army.

In the Serbian Campaign (July 1914–November 1918, with Bulgaria joining the Central Powers on 14 October 1915) the Bulgarian First Army was attached to August von Mackensen's (1849–1945) German Army Group on the Balkan Front. After the combined attack of Germany, Austria-Hungary, and Bulgaria, the Serbian forces retreated through Albania to the Adriatic Sea. The Macedonian front was then established, as a result of the Allies’ attempt to aid Serbia. Zhekov had to cooperate with Bulgaria's dominant senior ally, Germany, which barely left him room for strategic initiatives in joint operations. Despite that constraint, he had the Bulgarian Second Army under his command and managed to throw back the Allied offensives in Macedonia from 1916 to 1917.

The Serbian Campaign, initially a success for the Central Powers, turned into a military disaster for the Central Powers in autumn 1918. With Greece entering the war on the side of the Entente, the Macedonian front weakened, and the Germans pulling most of their troops towards the Western front, there was little chance for the Bulgarian High Command to motivate its exhausted and demoralized soldiers to hold their positions. After the Allies had a breakthrough at Dobro Pole, Bulgaria requested an armistice, signed on 29 September 1918.

Zhekov himself had left Bulgaria for Vienna due to an illness a few days before the Bulgarian military collapse, passing the command of the army to the deputy commander-in-chief, General Georgi Todorov (1858–1934). In the Bulgarian historiography and in the war memories of Bulgarian high-ranking officers, there is a controversy over his abandonment of the commander’s post in a very critical situation for Bulgarian troops. However, as commander-in-chief, Zhekov struggled in the last two years of the war with the Bulgarian government over the limited army supplies.[2] He also engaged in diplomatic missions during this period, trying to get German reinforcement for the Macedonian front.

After Romania’s entry into the war, German and Austro-Hungarian commanders demanded that the Danube Army, under August von Mackensen, cross the Danube river towards Bucharest. Zhekov gained acceptance for the Bulgarian plan: Mackensen’s troops would attack the Romanian province of Dobrudzha.[3] Bulgaria declared war on Romania on 1 September 1916.

Bulgaria had lost Southern Dobrudzha to Romania in the Second Balkan War in 1913, so Zhekov’s proposal reflected not only military concerns, but also Bulgaria’s original war aim to regain the lost territories. Using the balance of power in the military coalition, Zhekov managed to maneuver himself into a proper position to press for Bulgaria’s war aims to be accepted by his allies.[4] Nevertheless, disagreements over the occupation of Dobrudzha remained a point of conflict within the coalition until the end of the war.

After the war Zhekov lived in exile in Germany. He returned to Bulgaria in October 1921 to defend his politics, as the post-war government of the Bulgarian Agrarian National Union brought the wartime ministers to trial, accusing them of being bellicists. He received a ten-year prison sentence. In June 1923 the government was overthrown by a military coup. Zhekov was granted amnesty in 1924 after nearly three years in prison.

In the following years Zhekov wrote several books on military science and his memories of war. He also held lectures at the Military Academy in Sofia. From 1940 to 1944 he patronized nationalistic causes, and soon his political interests turned pro-German and anti-Semitic. He was eventually invited to meet Adolf Hitler (1889-1945) in Paris, following the defeat of France during World War II. In 1942 he was granted 500,000 Reichsmark by the Nazi regime for his merits during the First World War. He donated the money to an education fund for Bulgarian officers.

In early September 1944 Zhekov fled to Germany, fearing political repression by the newly established pro-Soviet government. In February 1945 he was sentenced to death in absence by the communists’ so-called People’s Court. He died on 1 November 1949 in Füssen, Germany. In 1992, after the breakdown of the communist regime, his remains were returned to Bulgaria and interred in the Military Mausoleum in Sofia.