The YMCA was a Christian charitable organization that provided a range of rest and recreational facilities for soldiers in Britain and on various fronts during the war.

Response to the Outbreak of War↑

The Young Men’s Christian Association (YMCA) was established in London in 1844 as a prayer and bible study group. At the outbreak of war the YMCA turned its pastoral experience to providing support for servicemen. By October 1914, 400 large marquees had been erected in Britain, and public appeals were launched to fund the building of large wooden huts to provide rest and recreational facilities. In November 1914 the YMCA worked with the British Expeditionary Force (BEF) to establish the YMCA in Havre, expanding into further centres in Rouen, Boulogne, Dieppe, Abbeville, Etaples, Calais, Dunkirk, Abancourt, Paris, Marseilles, Trouville and Cherbourg. By 1918 over 300 YMCA centres had been established in France. Most camps featured a canteen, chapel, concert hall, library, games room, classroom, and a quiet room. The centres were staffed by approximately 1,700 volunteers; many were women coordinated by the YMCA Ladies Auxiliary Committee under Helena Victoria, Princess of Schleswig-Holstein (1870-1948) and volunteers from Britain’s religious community.

The symbol of the YMCA, a red triangle, represented the organisation’s aim to be of Christian service to a man’s body, mind and spirit. Established as a prayer and bible study group for apprentice drapers to keep them away from the dreadful delights of London, at the outbreak of war in August 1914 the YMCA turned its attention to providing support and wholesome pursuits for troops fighting for Britain and her empire. Activities included providing writing paper, film showings, libraries, religious services, concert parties, folk dancing and educational lectures. YMCA amenities were well used by all British servicemen, but also by Dominion troops, the Indian Army, Portuguese forces, and the Indian and Chinese Labour Corps.

Music was a key part of the YMCA’s wartime service at home and abroad. The YMCA Music Department provided sheet music, instruments and expert speakers. Musical competitions were held, and several orchestras and choirs were formed. In February 1915, the actress Lena Ashwell (1872-1957) established concert party groups, giving over 50,000 concerts in the UK, on the Western and Eastern Fronts, and on troop ships in the Mediterranean. In 1917, the YMCA occupied Ciro’s nightclub in London’s Soho, providing a place of sober recreation for servicemen. YMCA cinemas showed films to an average of 35,000 men per night. The organisation ran twenty specially constructed cinema theatres in the principal base camps which were supplemented by portable cinemas for units in isolated areas. Athletics tournaments were organised and the YMCA formed its own football league at Boulogne. The YMCA provided the BEF with sports equipment, such as footballs, cricket and tennis sets, boxing gloves and hockey sticks, as well as around 600,000 books for YMCA libraries. From 1915 the YMCA provided accommodation for relatives of the gravely wounded near base hospitals, and by 1918 over 1,117,000 officers and men could be accommodated in YMCA hostels in London.

After the armistice the YMCA provided free meals and facilities for 70,000 prisoners of war, and the YMCA continued to work with the BEF in Germany, based in Cologne. The educational arm of the YMCA became the Army Education Corps in 1920. The YMCA’s wartime expenditure was calculated at £243.2 million, equivalent to £5.1 billion today, the majority raised by charitable subscriptions and donations. The organisation was widely credited for enhancing the health and fighting spirit of the troops. 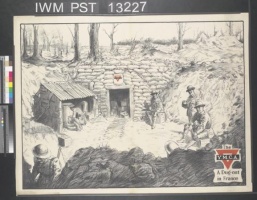 A dug-out in France 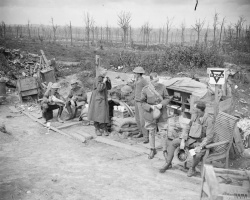 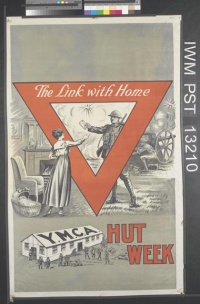 "The link with home" poster 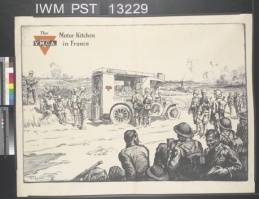 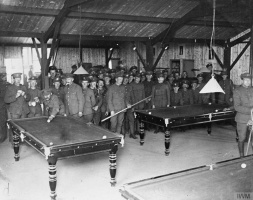 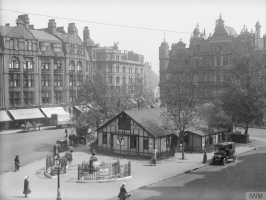 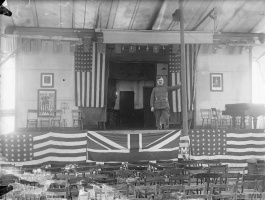