By December 1919, India had raised a total of 877,068 combatants and 563,369 non-combatants for the Great War. The latter included the Indian Labour and Porter Corps whose particular war experience, involving back-breaking toil in porterage, stevedoring, salvage activity and construction work, is often passed over in historical accounts.

From "Coolie Corps" to the Indian Labour and Porter Corps↑

"Coolie Corps" were a regular feature of militarized frontier-making in colonial India, and accompanied Indian Army expeditions overseas. In World War I, they acquired the more acceptable labels "Indian Labour Corps" (ILC) and "Porter Corps" (PC) and were more formally organized, with the men being enrolled as followers under the Indian Army Act.

Indian Expeditionary Force "B", sent to East Africa in November 1914, had a Railway Coolie Corps and a Supply Coolie Corps. Between September and November 1915, a PC from the Madras Presidency and two ILC from Punjab were raised for Gallipoli, but diverted to Mesopotamia, where an escalating logistical crisis generated an immense manpower demand upon India. ILC and PC were also used in Persia, and two ILC were stationed in Salonika. In 1917, the government of India also undertook to provide 50,000 labourers for France, with the first ILC disembarking at Marseilles in June 1917.

The official table for organized labour units with the Indian Army is given below, but the actual strength of the units was higher.

The armistice in November 1918 did not reduce the need to keep ILC and PC working in Mesopotamia and Persia. As India’s own frontiers began to collapse into the landscape of the First World War, "Coolie Corps" had to be raised for operations to crush the Kuki-Chin uprising along the Assam-Burma frontier and, from spring 1919, for the Third Afghan War and the Waziristan campaign (1919-1920).

Initially, regimental and army contractor-based networks were deployed to secure non-combatants, but there were complaints about shortfalls and "inferior" material. In 1916, jails had to be tapped to raise seven convict Porter and Labour Corps, made up of some 16,000 men, for Mesopotamia. By 1917, there was a shift to territorially-based quotas and closer coordination between civil and military authorities to ensure targets were met. The more intensive use of revenue officials, landlords and chiefs and the deployment of corvée for military recruiting sparked off some uprisings, as in the princely state of Mayurbhanj and along the Assam-Burma border. However, certain aspirational currents among first-generation literate members of "low caste" and "tribal" strata are also visible in labour recruitment, with missionaries and Indian catechists sometimes acting as a conduit.

A more all-India pattern marked recruitment for labour units sent to Mesopotamia than those sent to France, which had just two small clusters of men from the Bombay Presidency and Central India and none from Madras Presidency. What turned out to be politically significant was recruitment from the sparsely populated mountainous tracts stretching from Assam across to the Chin Hills in Burma, where going to France in the ILC or refusing to do so left a permanent mark on ethno-nationalist narratives.

Long work hours and unrelenting toil in stevedoring, construction work, forestry and salvage activity marked the labourer’s war, with particularly harsh conditions in Mesopotamia. The war diaries for the Jail Labour Corps illustrate the way in which the hunger for manpower of modern war can intensify existing forms of labour servitude. However, the same pressure also forced the Indian Army to reduce the disparity between the service conditions of "sepoys" and non-combatants. One advantage which labourers usually had over sepoys was their recruitment on fixed terms rather than on "duration of war" agreements. Nevertheless, repatriation at the conclusion of their contracts was something which labour companies had to struggle for, both in France and in Mesopotamia.

Writing in and Writing Out↑

Of the 1.7 million Indians who served in the Great War, about a third, some 609,396, were non-combatants.[2] However, both the government of India and the Indian intelligentsia had an investment in allowing the figure for non-combatants to simply blur into India’s total manpower contribution to the war. The colonial regime was anxious to distance ILC and PC recruitment from the politically controversial system of indentured coolie migration to the sugar plantations of the Empire. The Indian intelligentsia focused on the sacrifices of the valorous sepoy to demand political parity with the Dominions, instead of dwelling on the role played by the "coolie" and "menial follower". However, it also began to conceptualize a space for "labour" in its visions for the putative nation state and at the local level, war service lent a certain energy to movements for emancipation from the corvée system. 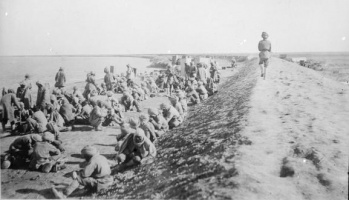 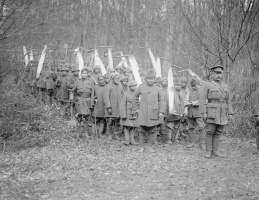