The Portuguese Expeditionary Corps was the most important Portuguese military contribution to the First World War. Its troops began to arrive in France in February 1917 but it soon developed a troubled relationship with the British army, whose command prevented its reassembly after the Battle of the Lys in April 1918.

The Portuguese Expeditionary Corps (Corpo Expedicionário Português, CEP), over 50,000-strong, was the supreme achievement of Portuguese interventionism in World War I. The CEP’s First Division, prepared over the course of 1916, set sail for France early in 1917. Not ready for trench warfare, its elements required further training, the administration of which led to early disagreements with British military authorities. As the CEP increased in size, British apprehension grew – but the overall need for men on the Western Front meant that the Portuguese remained in position until April 1918.

At its height (November 1917–March 1918), the Portuguese Expeditionary Corps operated as an independent army corps within the British First Army zone, in the frontlines in French Flanders, north of the La Bassée canal and south of Armentières. To its rear ran the Lawe and Lys rivers. The CEP’s two divisions were entrusted to Generals Manuel de Oliveira Gomes da Costa (1863–1929) and José Augusto de Simas Machado (1859–1927). This ground, which contained the village of Neuve Chapelle, had been fought over in the past, although of late it had become a quiet sector. The CEP had originally been conceived as a single division with an independent command structure, but this arrangement soon proved unsatisfactory. The fighting units of the division had simply been incorporated into the British XI Corps under General Richard Haking (1862–1945), preventing the Portuguese from enjoying the independence of command their political leaders desired. It was quickly decided to send a second division to France, turning the CEP into a full army corps, politically acceptable at home.

Declaration of War: The “Miracle of Tancos”↑

War Minister José Norton de Matos (1867–1955) had been charged in 1915 with assembling an Instruction Division which might be turned into an expeditionary force at any given moment. The German declaration of war arrived before this process had begun, but it jolted the Portuguese into action. Two brigades were assembled at Tancos, for what were extended manoeuvres in accordance with outdated precepts. Nevertheless, the press dubbed the process a “miracle” and the division’s commander, General Fernando Tamagnini de Abreu (1856–1924), was fêted. A third brigade was later put through its paces at Tancos. The results were sufficiently positive for an Allied military mission to give the green light to the CEP’s constitution and despatch to France in early 1917.

Norton de Matos and the Politics of the CEP↑

Authority within the CEP was divided between Tamagnini and the Corps’ staff officers, clustered around the figure of Lieutenant Colonel Roberto Baptista. Like Norton de Matos a late convert to the Republic, Baptista was essentially charged with ensuring that all aspects of the CEP’s existence conformed to the interventionist goal of maximum independence and visibility for Portugal’s war effort. A series of cultural and institutional clashes ensued, with Tamagnini acting as peacemaker and Baptista quickly becoming the bugbear of all British officers associated with the CEP. Baptista and Norton de Matos considered Tamagnini too eager to please the British; Tamagnini thought them both unrealistic in their pretensions, given the disproportion between the two armies. This conflict would last until December 1917.

Successes and Failures of the CEP↑

British military criticism of the Portuguese may have influenced the Admiralty’s decision to reassign the ships which were ferrying Portuguese reinforcements to other purposes, leaving the CEP essentially stranded in France as of autumn 1917. In practice this meant that the CEP’s casualties could not be replaced – and that its men felt increasingly abandoned. This sentiment was heightened by the fact that only officers were allowed to travel to Portugal on leave, a privilege denied to all other ranks, and by a number of other practical complaints. The success of Sidónio Pais’ (1872–1918) coup in December 1917 only worsened matters, rekindling political battles within the CEP. The coup also allowed the British to renegotiate the terms of the CEP’s role in France, the new Portuguese government agreeing to what Norton de Matos had vehemently refused some months earlier: the withdrawal of one division from the trenches, to be turned into a reserve force, and the insertion of British officers into Portuguese units down to battalion level. Although this agreement was reached in January 1918, British losses in 1917 had been so heavy that both of the CEP’s increasingly weak divisions stayed on at the front, carrying out their duty.

The Battle of the Lys and Beyond↑

In April 1918 the long-delayed reorganization of the CEP finally began. A single division, the 2nd, reinforced by one of the 1st’s brigades, stayed on at the front, tasked with defending the whole of the CEP’s sector as part of the British XI Corps. The ensuing days saw a number of mutinies break out among the troops required to stay on. Worried, General Haking ordered the 2nd Division’s infantry to the rear, but on the eve of this departure the Germans unleashed Operation Georgette, the second of their great offensives of the year. The Battle of the Lys, which began on 9 April 1918, saw what remained of the CEP routed with heavy casualties, notably in terms of prisoners. In its wake, and despite constant negotiations and a change of command, the Portuguese were kept away from the frontlines. Only in the final days of the war did a small number of battalions, dispersed among British forces, return to the trenches – at the cost of a further round of mutinies. 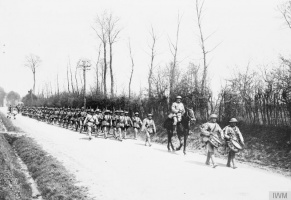 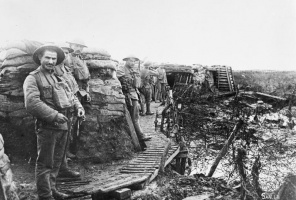 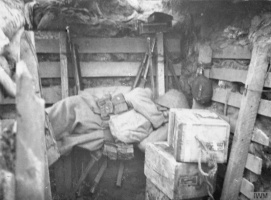 Sleeping in the dugout 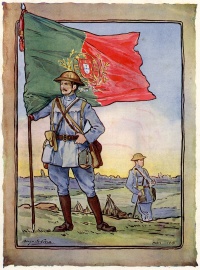