During the First World War, Austria-Hungary implemented a state of emergency with several emergency laws overseen by the kaiserlich und königlich (k.u.k.) Kriegsüberwachungsamt (war surveillance office, abbreviated KÜA). Although it presided over both halves of the empire, the KÜA never had an impact on the Hungarian state of emergency. It was important in press and post censorship, trade restrictions, internments, and cases of denunciation by the population.

The state of emergency in Austria-Hungary during the First World War was not an outcome of mobilization or the outbreak of the war; rather, it was based on decades of planning under the guidance of the war ministry (Reichskriegsministerium or Kriegsministerium) and the general staff.[1] The Austrian state of emergency had its roots in the Austrian constitution of 1867, which granted civilian rights to former subjects, but stipulated in Article 20 that these rights could be annulled in several cases. On 5 May 1869 a new law, (Gesetz über die "Befugnisse der Regierungsgewalt zu Ausnahmsverfügungen"), went into effect, stipulating the preconditions for Article 20: “drohende Kriegsgefahr" - in case of war or in anticipation of war - and "innere Unruhen" - internal riots. Before 1914 some of these internal riots took place and certain citizen rights had been annulled (e.g. since 1902 in Trieste). The state of emergency transferred jurisdictional parliamentarian responsibility to the government, and in the Austrian case, to army members. The compendium of emergency laws extended until the turn of the 20th century. Therefore the planners stated the necessity of an institution dedicated solely to carrying out emergency laws in times of war.

In 1906 the first emergency law guidebook was published; two more followed, in 1909 and 1912. This guidebook informed subordinate institutions about the emergency laws and how they should react to such a situation, before a state of emergency was ever declared. The guidebook laid out citizen duties and responsibilities, including regulations on private firearms, the abandonment by court jurymen, carrier pigeon possession, and letter and telegram censorship. It also contained information about the War Surveillance Office, which would be set up in case of emergency even without an order from the ministry or the emperor. The staff, which had already been designated during peacetime, consisted of many officers and delegates from the Austrian and common ministries, headed by a military general. All in all, the KÜA had about fifty employees (sometimes more) working in the War Ministry, including a growing number of women. In case of war these delegates were allowed to give orders pertaining to emergency laws without consulting their ministers first.

The state of emergency - the ministerial act that annulled constitutional rights - was introduced on 25 July by the so-called Gesamtministerium ("total ministry"), which referred to the prime minister Karl Graf Stürgkh (1859–1916) and his ministers acting without parliamentarian intervention. The Reichsrat, or parliament, was disbanded in spring 1914. Two days later the KÜA was set up.

From the first day of the state of emergency, the KÜA and its subordinate institutions were overloaded. Many workers had been mobilized in the military, which meant that all state institutions involved in the emergency laws had to do more work with less staff. The KÜA worked on 45,000 cases until April 1915. In addition to the growing number of staff officers and women handling daily administrative work, the ministerial representatives (designated before the war) started their work immediately.

Field Marshal Lieutenant Leopold Schleyer von Pontemalghera (1858-1920) became the first head of the KÜA. Two representatives each were sent by the ministry of foreign affairs, the common ministry of finance, and the Austrian ministries of interior, justice, and commerce; the Austrian ministries of finance, defense, and railway each sent one representative. These representatives made decisions on behalf of their ministers if the issue at hand regarded their ministry. This procedure guaranteed quick action, and the respective minister was informed afterwards. In the beginning, outgoing orders were signed by Schleyer even though the ministerial representatives had made the decisions behind them. On the other hand, this chain of command made the public think the army held a decisive role inside the KÜA. A liaison officer was sent from Budapest to facilitate communication between the two halves of the monarchy concerning the state of emergency.

The KÜA mainly dealt with cases concerning the organization of internees and POWs, and later with the censorship of parliamentary protocols - even though these issues were not mentioned in pre-emergency plans. Apart from these duties, the KÜA dealt with export of war goods, as well as media and communication censorship. The KÜA held press conferences, but it did not write propaganda or other articles on its own. The KÜA also dealt with so-called “subversive elements”: people who were accused of working against the Habsburg Empire’s interests. The harsh measures introduced by the emergency laws led to denunciation among the general population, often caused by personal animosities, the abandonment of the parliament, and the overload on various institutions, which resulted in injustice and wrong sentences. Historians Irina Marin and Martin Moll provide regional examples of this unrest.[2] The historian Mark Cornwall called this period “de facto a bureaucratic military dictatorship.”[3]

Although the Kriegsüberwachungsamt was attributed "k.u.k.," it was not responsible for the kingdom of Hungary (with the exception of designated military zones). Although planners in Vienna had tried to involve Hungarian politicians and ministers, they did not achieve an agreement until July 1914. Hungarian politicians were against several parts of the plan. For example, the Hungarians were concerned that the KÜA, a common institution, was based in Vienna; the main argument had been that the Hungarian constitution lacked stipulations comparable to the Austrian Article 20. During the war in Hungary a Hadi felügyeleti Bizottság (war surveillance commission) was set up. It was not comparable with the KÜA as it had no authority to give directives; ot was only a distributor that sent letters from the KÜA or for Hungarian institutions to their respective ministries. There had been always political animosities between the Hungarian politicians and the imperial center in Vienna, but this commission worked without conflict with the KÜA. A Hungarian liaison officer even worked in the KÜA.

There were some differences between the Austrian and the Hungarian states of emergency. In Austria many responsibilites went into the hands of the army, while in Hungary, Prime Minister István Tisza (1861–1918) held almost absolute power over emergency laws. Although the Hungarian politicians looked sternly on the division of Austrian and Hungarian power in other cases, there was almost no discussion about the KÜA being responsible for Bosnia-Herzegovina. In Bosnia-Herzegovina the state of emergency was introduced by Governor Oskar Potiorek (1853–1933).

But it was much harder for the Hungarian prime minister to handle the state of emergency than it was for the ministers and the military in Vienna. In Hungary the parliament met continuously throughout the war, but Austria needed a new Kaiser and regime to let the parliament reunite in spring 1917. After only a few months the parliament and the newspapers argued successfully that the KÜA could not remain in power as such. They criticized that a general headed the institution and signed all civil responsibilities, and that, at least since 1915, the Armeeoberkommando (army's high command) had authority over the KÜA. From summer 1915 to 1917, the army and especially the chief of general staff, Franz Conrad von Hötzendorf (1852–1925), took control of civil ministerial matters through the KÜA. This authority, granted by the kaiser in summer 1915, showed that before - in Conrad's eyes - the KÜA had not acted in his favor.

Officially, after severe criticism from the parliament and the press, the KÜA was dissolved in summer 1917. In reality, its duties had been transferred to a Ministerialkommission im Kriegsministerium (ministerial commission in the war ministry). This successor ministry had almost the same duties and personnel. The only important change was the abandonment of the Weisungsrecht (authority) of the army’s high command, and it was now co-run by a military and civilan official. It also gained new responsibilities: since parliament began meeting again, it organized the censorship of the parliamentarian discussion.

The historiography mostly uses Josef Redlich's book (Österreichische Regierung und Verwaltung im Weltkriege) to describe the so-called military dictatorship in Austria during the First World War, but in fact, some of Redlich's claims seem specious. Redlich wrote about the secrecy of the KÜA, which was not as such. Already on 3 August 1914 the KÜA advertised in the press that they were looking for "subversive elements" and therefore supported denunciation. Redlich also wrote that the KÜA was only a military plan, which was not true, as civil ministries always had been part in the planning process of the emergency laws. Redlich claimed that the plans for the state of emergency started around 1912, but they had already begun with the constitution in 1867, and the KÜA itself was mentioned for the first time in the 1906 handbook. Historiography also indicates that there was much more freedom in Hungary than there was in reality. Although the army was not powerful in Hungary, similar restrictions were in place with parliamentary support. 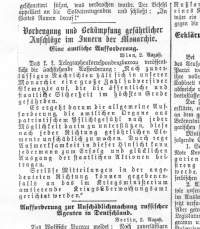 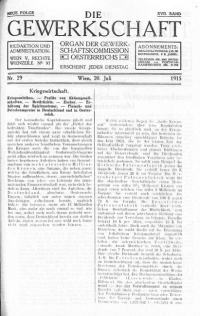 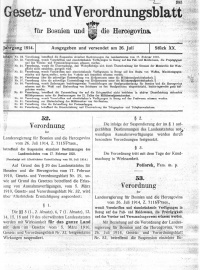 Law and ordinance gazette of Bosnia-Herzegovina